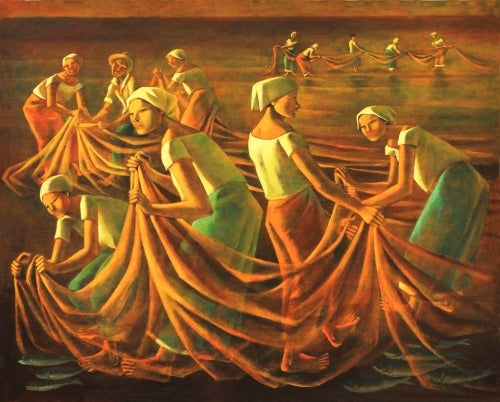 LEÓN Gallery will auction off the largest work by Anita Magsasay-Ho as part of its Spectacular Mid-Year Auction on June 13, at León Gallery, Eurovilla 1, Rufino and Legaspi Streets, Legaspi Village, Makati City.

León Gallery director Jaime Ponce de León noted that “Fish Harvest at Dawn” was the largest work by the only female member of the 13 Moderns of Philippine Art (so proclaimed by National Artist Victorio Edades) to be offered at auction, local or international.

“Coming from a much sought-after period which exemplifies [Magsaysay-Ho’s] stylistic maturity, the Green Period, in the words of Alice Guillermo “it completely departed from her earlier angular and vigorous style influenced by American gestural expressionism of the ’50s, to discover exquisiteness in the quiet and serenity of the women,” De León said.

“The 1950s were largely drawn from the New York artistic influences of the time, the 1960s took up the concept of the interplay of artistic control, and from the mid-’70s showed the artist as having moved away from the pressures of her influences and finally an output all her own.”

Joya’s oil-on-wood “Broken Kites,” signed and dated 1972, will have a starting bid of P3 millon.

Also of signficance are Ocampo’s 1970 oil-on-canvas “Mother and Child” and Manansala’s 1963 oil-on-canvas “Golgotha.” Both have a starting price of P1 million.

Bencab’s “Iza as Sabel” —which has a starting bid of P500,000—is a portrait of the actress Iza Calzado, who starred in the musical “Sabel, Love and Passion.” Proceeds of the sale of this lot will go to the BenCab Art Foundation to help fund the retrospective “BenCab: 50 Creative Years.”

Mansit reworked an old photograph, reproducing its cracks and discolorations, in his 2010 mixed-media “Maniobra.” It has a starting price of P100,000.

Barrioquinto’s 2015 oil-on-canvas “Love Left Behind,” part of a series inspired by the artist’s wife, will be sold starting at P400,000.

The furniture standout on this auction as De Leon said, is the Isabelo L. Tampinco desk and chair set “in mint condition.” The set has a starting price of P800,000.

“These small writing desk and chair are one, if not the only one, in existence,” Tinio said. “They are not only signed, but even have the Tampinco label pasted at the bottom of the chair. They are superb examples of the carver’s art, with every detail crisply executed.”

The kamagong bed, which stands on four turned and reeded tapering legs, will be auctioned off starting at P800,000.

“This kamagong bed, of a type and size that is seldom seen, is probably one of less than a handful in existence,” Tinio said. “Its design is reminiscent of the divan-type narra beds often seen in mid-19th-century Philippine paintings that portray the death of St. Joseph.”

A highly important piece on the auction is the large ivory figure of the Virgin and Child, whose provenance came from a private collection from the United States. Its starting price is P1.2 million.