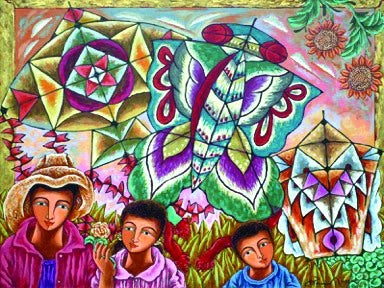 A “museum without walls” is exactly what it is: the recently launched coffee-table book on the life and art of the late Mario Parial affords the reader to experience the rich efflorescence of a species of Philippine folk genre in the hands of an artist who, in my estimation, brought it to its apogee. The cover of the book bears no title or author’s name; indeed, it is a trompe l’oiel of a compact and handy painting measuring a foot square, complete with its brown wooden frame.

The title is to be found on the spine: “Mario Parial: Beyond Reality.” The author is Ruben D.F. Defeo. Book design is by Dopy Doplon. Editor is Winnie Velasquez. Photography is by the artist’s son, Mikel Parial.

The Parial estate, now managed by his widow Carina and son, artist Mikel, has found the ideal biographer and critic in the person of critic and art professor Ruben D.F. Defeo. A friendship of long standing with the Parial family allows Defeo the unique position of chronicling the art of Parial all these past decades. This book is in effect a summation of the life and art of Mario Parial.

Defeo traces the childhood of Parial in Gapan, Nueva Ecija, his move to the big city where he enrolled at the then College of Architecture and Fine Arts of the University of Santo Tomas (UST), his marriage to Carina Espejo Claro, the birth of daughter Ochie and son Mikel, and through the various stages of his art career and his serious excursions into printmaking and photography.

Parial is traditionally grouped under Folk Genre artists. Their works derive their vitality and significance from their exploration of the lives of our native folk and lifestyle. This group counts among them the likes of Angelito Antonio, Norma Belleza, Antonio Austria, Manuel Baldemor. Their exemplar is Vicente Manansala who, in his own so-called Transparent Cubism style, celebrated the lifestyles of pastoral and urban folks. Typically, their favored subjects were the Mother and Child, vendors of various wares (flowers, candles, birds, fish, toys), fiestas and processions, customs, traditions, rituals, ceremonies, objects of devotion and events of celebration.

These images carry within them the energies and attributes that ultimately define what is Philippine art. The late critic Leonidas Benesa was prescient in identifying the works of the Folk Genre artists as “a growing body of works in a distinctly Philippine tradition…. They are Filipino paintings.”

Interestingly, the painting that first became synonymous with Parial was the painting titled “Mayhaligue.” It is perhaps the most personally symbolic of all the artist’s works. It is inscribed with the number of the house, 1624, which was, in fact, the family residence. It depicts a mother and looking out the window crowded with potted plants and lush foliage.

As Defeo observed, Parial subsumed and synthesized his admiration for such artists as Chagall, Matisse and Kandinsky, and from the depths of that cauldron of influences, Parial emerged with his own liberated art. His art is decorative in its most positive sense, in the sense that Matisse was decorative. His strongest suit straddles both the spiritual aspects of our culture and the festive and celebratory images of the Philippine scene. While Ang Kiukok drained the life from the exhausted and flayed body of the Christ, Parial brought it alive with the ecstasy of his colors and his superb gift for design. His exuberance for composition is staggering, as witness the relentless repetition and elaboration of patterns and forms which ascend to the level of fractals.

In Parial’s works, the concept of horror vacui (fear of empty spaces) finds its most exhilarating expression. Space is delectably consumed. He favored the massing of repeated forms, whether inspired by the arabesque or drawn from geometry. His artworks draw their power from the trademark ornamental patterning which itself can be overwhelming. Parial’s aesthetic force derives not so much from the choice of subject but from his idiosyncratic but breathtaking multiplication of forms.

His select images may be regarded by turns as commonplace, cliché or classic—Mother and Child, flower and balloon vendors, clowns, musicians, Moriones masks, crucifixion, garden scenes—but they are commanding by virtue of their execution. Parial was simply incapable of doing a drab and dreary painting; everything to him was a tableau vivant, pulsing and seething and shimmering and set into motion by an encounter between color and forms. For Parial, every brushwork was an act of flourish.

Defeo writes: “These two facets—mirth and piety—of Philippine customs and traditions remain at the very core of his art. They are oftentimes expressed through the unabashed use of vibrant hues and the almost childlike way he limned his images—simple flat figures devoid of any perspectival illusions, yet pleasant in their representation and native expression of unadulterated glee and folksy spiritual supplication.”

Multi-awarded book designer Dopy Doplon, Parial’s close friend from their UST years, understands the “space” of a book, itself a three-dimensional object, in the same way that an architect does, or, indeed, as a musician understands time. The turning of each page can be an equivalent to the rhythm and interval of music, such that a visual surprise awaits and springs at the turning of each page. Doplon has built the museum without walls for his dear departed friend.