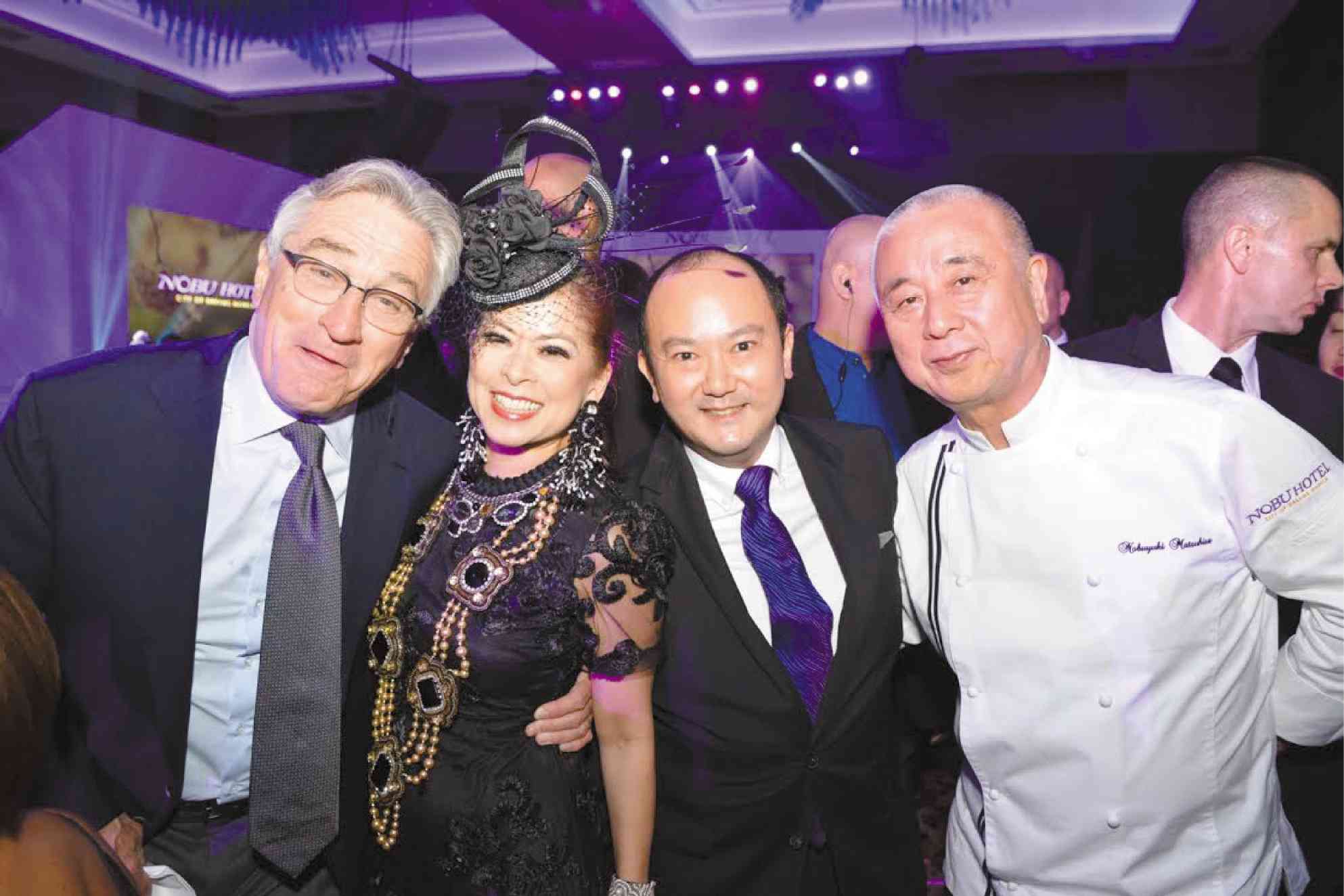 My Facebook profile photo is a throwback to the time when I had the chance to attend the Hollywood premiere of Disney’s “Enchanted” and had a snapshot with lead actor Patrick Dempsey.

I recently had a photo with Academy Award-winning actor Robert de Niro, so it’s time to consider a change.

My De Niro moment was all thanks to the grand opening of the Nobu Hotel at City of Dreams Manila. De Niro was in town with his wife, Grace Hightower, and in between events, gorgeous host Iza Calzado took Pepper Teehankee and I to have our picture taken with the charming Hollywood star, thanks to ace photographer Daniel Tan (@dtanph on Instagram).

The musical performance of international hip-hop star Apl.de.ap thrilled guests, highlighted by a stunning dinner-cabaret program that featured his “Apl-Gang” of young Filipino starlets. By the time they were done, the crowd was dancing in front of the stage and asking for an encore.

It’s that sort of liveliness and impromptu joie de vivre that must have made the more staid foreign guests say to themselves, “We’re not in Kansas or Macau anymore, Toto.”

Nobu Hotel GM Marlon Hirsch was delighted with the day’s events and especially proud of his chefs, including Thomas Buckley who prepared a sumptuous dinner as only a Nobu dinner could be.

Indeed, the 321-room hotel will feature laid-back luxury and a high-energy nightlife, but the signature restaurant is sure to be its enduring center.

Another extraordinary affair was the by-invitation-only dinner thrown by Dom Perignon, the world’s most famous luxury champagne brand, at the National Museum in Manila. The intimate five-course dinner featured internationally acclaimed wine critic James Suckling, who shared the remarkable heritage and distinct tale of this prestigious champagne house.

Moet Hennessy Philippines managing director Steven Bullock cohosted the event, which took the guests into the wonderful journey of the bubbly’s illustrious history.

Everyone marveled at the art-mapped 3D presentation, with music by the ABS-CBN Philharmonic Orchestra.

Among the champagnes served was a 1996 Dom Perignon P2. This opulent and superb vintage is a paradox to the palate, with concentration and movement vying for ascendancy. On the nose, praline rapidly combines with citron and dried figs, with darker underlying iodine and peaty notes.

I confess I’m not a wine aficionado, so I thank Moet for sending over a cheat sheet to quote from.

The 2003 vintage is one of superlatives: a year like no other, defined by extremes. The vineyard was first touched by severe spring frosts and then by an unparalleled heat wave. The vintage of a perfectly ripe and healthy small harvest is thus the most precious since 1822.

My favorite was the Dom Perignon P2 Rose 1995. I’d quote from the notes, but the real reason I liked it was because I like pink. Plus, after three glasses, what’s not to like?

The Peninsula Manila executive chef Mike Wehrle did an excellent job creating the best dishes to complement all the vintages being shared.

Kaye Tinga, cochair of the Red Charity Gala, was busy arranging for the supply of mini bottles of bubbly for the debut of her pretty daughter Kerry.

Kerry’s 18th birthday was celebrated at The Eye in Green Sun, with a Studio 54-themed disco party. The debutante had a blast with 18 different dancing partners, all in disco outfits.

Mom Kaye prepared a Best Dressed prize for the “best in disco outfit” party people. Winners included Luigi Villafuerte, Kathy Kelly and Miguel Zubiri. They all went home with a big bottle of Dom Perignon as their prize.

Bubbly is the theme of this article it seems. Ready to pop the bottles is Fila’s royal couple Butch and Cris Albert as they celebrate their 21st wedding anniversary next month.

To officially launch the milestone, a prewedding party was celebrated among her closest friends.

Lavishly catered by Bizu, the indoor garden party was festooned with summer blooms and colorful macaroons.

Adorable flower cupcakes by Hearts & Balls and tote bags and pillows with #Love21BC by @mimssac were given to each guest as giveaways.

Matron of honor Len Olbes and I welcomed the rest of the entourage as designer Rajo Laurel gave the ladies his vision of the theme of the wedding.

We are all looking forward to this romantic anniversary party as Butch and Cris renew their love vows.

I’m already planning my outfit for that evening. My shoes will be from designer Nere Ku.

The famous shoe designer is celebrating his third year in the industry with a big exhibit and fashion event at the SM Megamall Fashion Hall in a couple of weeks.