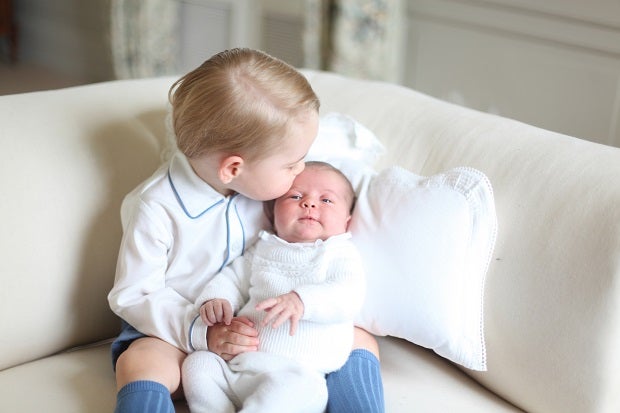 CORRECTS LOCATION - This image made available by Kensington Palace Saturday, June 6, 2015, taken by Kate, Duchess of Cambridge, at Anmer Hall, eastern England in mid-May 2015 shows Britain's Princess Charlotte, right, being held by her brother, 2-year-old, Prince George. Britains royals have been photographed by some of the world's leading photographers. But Prince William and Kate are continuing a more informal tradition begun two years ago with the first official portrait of Prince George, taken by his grandfather Michael Middleton. Charlotte was born May 2 and is fourth in line to the throne. (Duchess of Cambridge via AP) MANDATORY CREDIT

Kiss from big brother in pics of Britain’s royal baby

LONDON, United Kingdom – The first photos of Britain’s Princess Charlotte together with Prince George, who is pictured giving his baby sister a kiss, were released by Kensington Palace on Saturday.

The four photographs, taken by their mother Kate, the Duchess of Cambridge, show 21-month-old George sitting on a sofa holding Charlotte.

The portraits were taken when Charlotte, born on May 2, was around two weeks old.

Propped up by two white cushions, Charlotte appears to be wearing a white romper suit with a matching jumper.

Her brother is dressed in a white shirt with blue piping detail around the collar, cuffs and front, and matching blue socks and shorts.

One picture shows George planting a kiss on his sister’s forehead, another shows him tenderly looking down at her, a third shows him looking up and a fourth shows him smiling.

“Prince George and Princess Charlotte together at home #WelcomeToTheFamily,” Kensington Palace, William and Kate’s official residence in London, said as they released the image on social media.

“We’re delighted to share the first photo of Prince George with his little sister Princess Charlotte.

“The photo of Prince George and Princess Charlotte was taken by The Duchess of Cambridge in mid-May.”

Pictures of George have been rare. Only a handful of sets have been released, while he has rarely been seen in public.

The first pictures released of George at home after his birth were taken by Kate’s father Michael Middleton.

George, who is directly in line to inherit the throne after his grandfather Prince Charles and then William, was last seen when his father took him to hospital to see his newborn sister.

Earlier, Kensington Palace released pictures of the multitudes of gifts, cards and toys the family received after Charlotte’s birth, sent from all around the world.

They showed bundles of mail stacked up on filing cabinets, knitted dolls, slippers and bonnets and hand-written cards from schoolchildren.

“Thank you to everyone who took the time to make handmade gifts,” the palace said.

It was announced Friday that Charlotte will be christened on July 5 at St Mary Magdalene Church, Sandringham, where William’s late mother Diana was baptised.

Charlotte will be christened as a member of the Church of England by Archbishop of Canterbury Justin Welby, spiritual leader of the Anglican Church.

William and Kate have been staying at Anmer Hall in Sandringham since Charlotte’s birth at St Mary’s Hospital in London.

In tribute to his grandmother and mother, William and Kate gave Charlotte the middle names Elizabeth and Diana.

The princess is fourth in line to the throne after her brother Prince George, who was born on July 22, 2013. He was baptised at St James’s Palace in London.