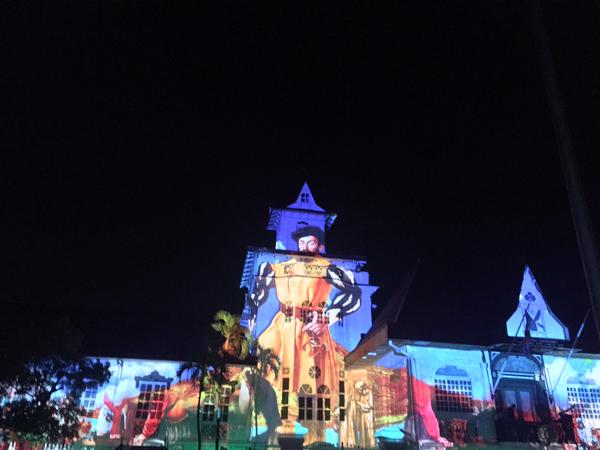 The Aguinaldo shrine in Kawit, Cavite came to life on the eve of the Philippine Independence Day during a video mapping show at the historical site.

The 18th century house of the recognized first Philippine President Gen. Emilio Aguinaldo was illuminated through a “projection mapping” or “spatial augmented reality.”

Projection mapping uses “digitally-produced images based on the architectural lines of a structure to tell a story, create an impression, and bring any structure to life.”

Videos of historical events in Philippine history as well as other historical and tourist sites in the country were projected during the 20-minute show.

#INQuiz: How much do you know about Philippine Independence Day? (Part 1)

Hundreds of spectators, who flocked in front of the national shrine to witness the show, were stunned with awe and excitement as the Aguinaldo Shrine transformed into a lively architecture projected with various images.

“The lighting and video mapping show of the Aguinaldo Shrine is the first time that it will be displayed on a national heritage site in our country. A state-of-the-art, avant-garde show of our history, it will tell the story of who we are as a people in a single, fluid, audio-visual narrative,” Director Rebecca V. Labit of the Department of Tourism Region IV-A said.

Tourism Secretary Ramon Jimenez said the Aguinaldo Shrine was a witness to one of the most crucial moments in Philippine history.

“Being an important edifice of our national identity, it is a living reminder of the freedom that our ancestors have fought and longed for, and the monument of the successes that our country has achieved since then,” Jimenez said in a statement.

“Through this project, our foreign and domestic tourists will have a deeper understanding for the many heritage destinations around the country,” he added.

He urged the public, including the private sector and other stakeholders, to work together to preserve the country’s tangible and intangible cultural heritage for the next generation of Filipinos to see and appreciate.

#INQuiz: (Part 2) How much do you know about Philippine Independence Day?

“Our achievements today are rooted and founded on our past. And our history and national heritage are integral to the continuity of our national identity,” he said.