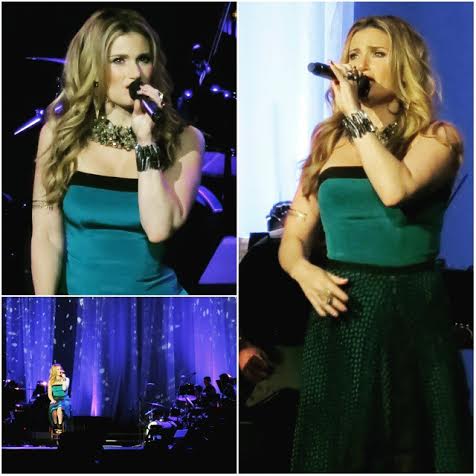 She was charming and funny, easy and neighborly as she shared personal anecdotes in between belting out her numbers, more than half the time barefoot. PHOTO COLLAGE BY FRANCO LAUREL

Idina in Manila: The diva is also a rock star

As Broadway divas go, Idina Menzel is something of a curiosity. She has nowhere near as much credentials and Tony nominations under her belt as living theater royalty like Patti LuPone, Bernadette Peters and Audra McDonald.

And no immaculate, crystalline instrument, either, that can hold a candle to the likes of her “Wicked” co-originator Kristin Chenoweth’s or even Lea Salonga’s (and we say that with not a hint of homecourt bias).

Yet, Menzel sold out the cavernous SM Mall of Asia Arena for her solo concert on June 7—a first for a foreign theater artist, we think. And the screaming and shrieking that punctuated the evening were more than enough proof that this woman is a superstar, perhaps even more famous these days than any of those aforementioned names.

Onstage, however, she was no diva. (Forget what you’ve heard about how she is at the stage door.) She was charming and funny, small and neighborly as she shared personal anecdotes in between her numbers, more than half the time barefoot.

Speaking of belting—she did deliver, weathered instrument and all. The goods, some of them sung a key lower, remained blustery, eardrum-blasting affairs: “Defying Gravity” and “The Wizard and I” from “Wicked”; “Always Starting Over” from her most recent Broadway show “If/Then”; “Don’t Rain on My Parade” from “Funny Girl.”

In short, it was an evening tailor-made for her rabid fans, which somehow made excusable her peculiar enunciation, the words and letters sliding and slithering round her mouth in strange serpentine fashion, so much so that her Cole Porter (“Love for Sale”/ “Roxanne”) and Ethel Merman (“There’s No Business Like Show Business”/“Anything Goes”/“Everything’s Coming Up Roses”) medleys became games of guess-the-lyrics.

In fact, the best moments were those that involved the audience. With “Take Me or Leave Me,” the lesbian lovers’ duet she originated in the musical “Rent,” Menzel went down the stage to pick out three people to sing with her—by pure chance, former “The Voice of the Philippines” contender Timothy Pavino and two lucky girls who must have wished they never had to bathe again after that night.

The song that made her one of 2014’s it-girls, “Let It Go” from Disney’s “Frozen,” was an endearing, if somewhat bamboozling, number, as both Menzel and the audience struggled to keep up with a hastily improvised Filipino translation of the chorus (“Bumitaw/bumitaw/’di ko na maitatago,” it went, though overhead screen projections would surely have helped).

“No Day But Today,” the song from “Rent” that has become the ultimate anthem of celebrating love and life, literally sparkled as the audience held up and waved their phones alit, the lyrics (“There’s only us/only tonight/we must let go/to know what’s right”) seemingly taking on newer meaning.

Finally, thanking her “very sophisticated, very smart” audience, she sang the parts of Elphaba in “For Good” unamplified—the entire arena suspended in silence, that distinct voice perfectly comprehensible as it echoed in the stillness, the crowd joining her in a growing chorus to finish the song. One could not have felt a more entrancing moment.

Her rendition of Radiohead’s “Creep” (because “some days, you look in the mirror and you just don’t like what you see”), when she totally let her hair down, even lying flat on the floor, seemed to show she no longer gave a care in the world.

Menzel showed us that, yes, this diva is also a divine rock star.