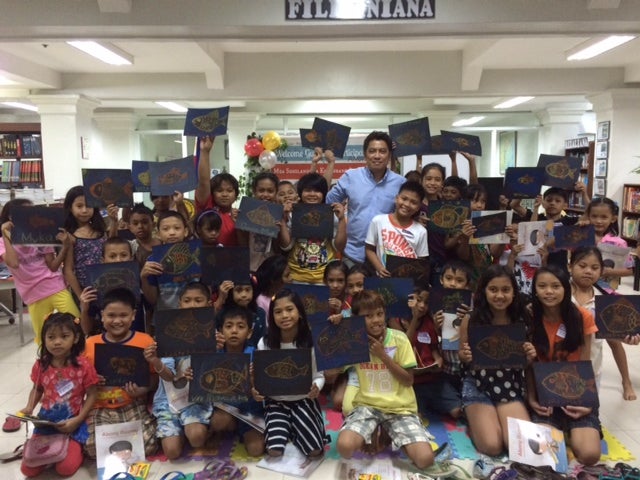 AS PART of the recent National Heritage Month (NHM) celebration in Cebu City, book-giving and storytelling sessions were held at the Rizal Memorial Library and Museum, popularly known as the Cebu City Public Library.

The NHM celebration was spearheaded by the National Commission for Culture and the Arts (NCCA), especially its Subcommission on Cultural Heritage (SCH), whose grassroots heritage program is Taoid (or patrimony).

“This is the first time that you see the collaboration and synergy of the City Government of Cebu with the Cebu City Public Library working with the NCCA, specifically [its national] committees on Libraries and Information Services (NCLIS), Art Galleries (NCAG), and Monuments and Sites (NCMS),” said Marilou Tadlip, head of the NCLIS.

During Taoid in Cebu, 14 top performing barangay reading centers were showcased in an exhibition at the Rizal library, under the direction of librarian Rosario Chua. The 14 centers sent children, 7 to 12 years old, for the reading of “Ang Bugsay,” written by Amaya Aboitiz, illustrated by Karmina Cuzon and published by the Ramon Aboitiz Foundation Inc.

The bilingual coloring storybook teaches the goal-oriented principles of Aboitiz, and seeks to cultivate such virtues as perseverance, humility and gratitude.

The book was read aloud by lawyer Mikel Rama, president of the Cebu City Youth Movement, who gamely took his shoes off to sit with his young listeners to chat before reading.

The kids were next treated to “Pagpahiluna sa Katuyuan: A Goal Setting Activity,” based on the book, facilitated by award-winning librarian Ma. Lorna Eguia of the University of San Carlos.

Mounted likewise were “Art to Heart,” a book-donation drive of the NCAG, and an art workshop conducted by artist Wilfredo Offemaria Jr., who guided the kids in their renditions of fish and asked them to piece their drawings together in a makeshift collage. Through this, he taught the kids how their individual efforts, when joined collectively, would greatly help the community.

NCCA Commissioner Fr. Harold Rentoria, OSA, who heads the NCCA-SCH, praised the pooling of resources by national and local agencies in order to promote and protect cultural heritage.

To boost the shelves of the barangay libraries, NCCA-SCH, with the Center for Art, New Ventures and Sustainable Development (Canvas), an arts-promotion nongovernment organization, handed out to the local librarians copies of the children’s book “Message in the Sand.”

Published by Canvas, “Message in the Sand” is written by Charmaine Aserappa and illustrated by artist Roel Obemio.

“The development of baranggay reading centers is really a focus area for us,” said Tadlip, “and even if only 14 so far are performing optimally since the Cebu City Public Library and the Department of Education began the endeavor, the goal is to help all barangays eventually.