Archivo 1984: A light in the urban dark | Inquirer Lifestyle 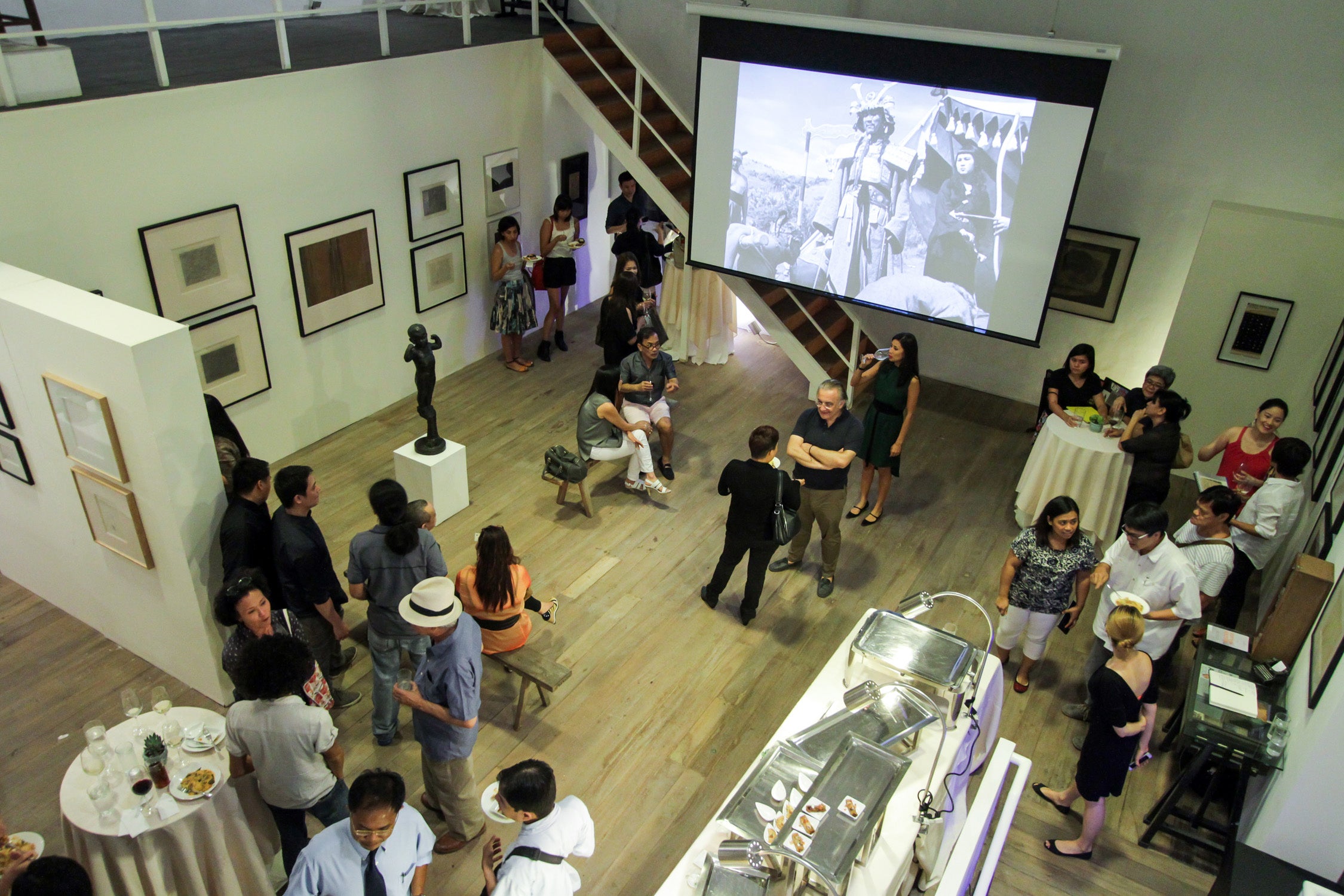 THE AUDIENCE gathers to watch the restored print of Manuel Conde's "Genghis Khan" and view the abstracts on display. LEO M. SABANGAN II

LIKE a trick of the light, Archivo 1984 is a gallery surrounded by urban sprawl, art hiding in plain sight.

On Chino Roces Avenue, between the streets of Dela Rosa and VA Rufino in Makati City, is a nondescript warehouse. Though there is a tarpaulin hung on the gate, it is too easy to not notice that an art gallery is right there, especially at night.

A helpful guard opens the gate, points the way. You walk down a driveway and into a warehouse. Right at the very end, there is a big, heavy metal door to the left. The door slides open, and light almost blinds you.

You are faced with wooden steps. You climb up, and the brightly lit space embraces you, all two floors of it expanding outward, filled with paintings. Welcome to Archivo 1984.

Just like its location, Archivo 1984 occupies an unusual place among Philippine art galleries. Businesswoman/artist Ciara Sevilla Eadie is one of Archivo’s directors, and she explains that the gallery is special because of its offerings of art and Filipino-movie memorabilia, thus a celebration of images moving and still.

She says the gallery began as “a handpicked collection of one of the directors, a personal archive.” The Spanish word archivo (pronounced “arkivo”) means “archive,” of course, and the “1984” in the gallery’s name is the year the silent partner/director started his collec- tion of movie memorabilia.

In 2012, Archivo 1984 opened up its first gallery, what Eadie describes as “a small, rustic” space on Palma Street in Rockwell, Makati.

“People would go all the way there to see the offerings,” she says.

In late 2014, Archivo 1984 moved to its current, eclectic location along Chino Roces Avenue, and the gallery is still being finished. Still, the owners were ecstatic to land there.

“We were happy to find a space like this still available in Makati,” Eadie says. “We really like the feel of the space, so we kept the old wood.” While there is movie memorabilia for sale here, Archivo 1984 exhibits most contemporary Filipino art on the two upper floors. Here, Archivo 1984 also occupies a unique place as it tries to feature artists considered by some as being under the radar, such as those who were painting in the 1970s and 1980s.

“Young collectors spend a lot of money on newer artists, and they don’t know about these artists,” Eadie says. “And they deserve to be discovered.”

This unusual focus adds to the mystique of the gallery. “We like treasure hunts.”

Among the artists the gallery is happy to feature are Ray Albano and Fernando Modesto. “His career is amazing,” Eadie says of Modesto, for example.

Away from the main gallery and its array of moderns, Archivo 1984 has a collector’s room hidden away at the back, where Philippine masters hang against a dark varnished background. On the right day, you just might find a Juan Luna or Felix Resurreccion Hidalgo piece here.

A difference is present at Archivo 1984’s other venture: The CCP Shop by Archivo 1984 on the Cultural Center of the Philippines Little Theater lobby. Though The CCP Shop sells only memorabilia—check out that rare framed “Bagets” poster from 1984—and not art, it is a fascinating outpost com- plete with authentic framed movie posters and vintage publications.

“It’s such an exciting opportunity to be working with the CCP,” Eadie says.

Archivo 1984’s mix of images moving and still was on full display last May 6, when the gallery had its first event in its Chino Roces gallery.

Archivo 1984 had another gift to give: the screening of the restored print of the seminal 1950 Manuel Conde film “Genghis Khan,” which had its international premiere at the Philippine Pavilion at the 56th Venice Biennale in Italy.

The print was stunningly clear, and Conde’s vision was intact; in a unique Archivo 1984 touch, memorabilia from the film were also on exhibit. Videos by artist Manny Montelibano, who is also part of the Philippine Pavilion in Venice, were also screened.

The spirited audience at the screening fitted right in with the exuberant, trailblazing direction that Archivo 1984 sought to foster.

Even as Archivo 1984 continues to evolve into what it seeks to truly be, it seeks to continue its low-key crusade to fill in the gaps and move people. In the street outside the warehouse, still streetlights and the moving head- lights of jeepneys break the dark.

That’s kind of what Archivo 1984 is all about, something unusual amid the usual. That a place like Archivo 1984 exists and flourishes is big, bright evidence of something good for the market for Philippine art, says Ciara Eadie.

“We love the fact that there are so many burgeoning galleries. This is such an exciting time for art in the Philippines,” she concludes.