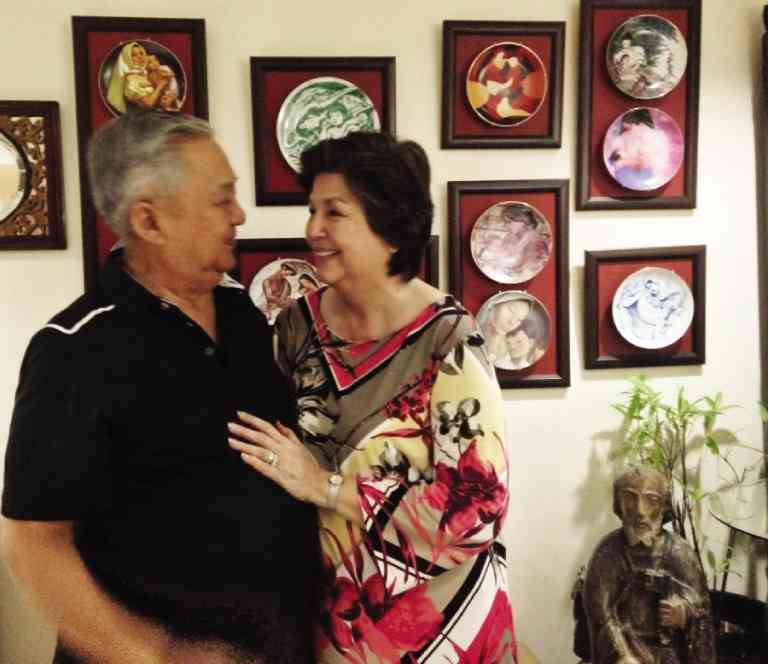 King Rodrigo and Boots Anson-Roa, one year after

Humor seems to be the hallmark of the Boots Anson-Roa and King Rodrigo union. The two senior lovebirds make one believe again in the possibilities of a second spring.

Proof of this is an imaginary child. “John the Baptist Rodrigo,” King says, his eyes gleaming in delight. “That’s what we call him.”

When I prod and ask why, he explains, “Remember Elizabeth in the Bible, she was a barren lady, di ba? And her husband, Zechariah, was old, too. O di kami ’yon!”

And he lets out a laugh. “But we thought of giving him a more modern name, so we call him John-John. We told Cardinal Tagle (who officiated at their wedding last June 14) about this, so to this day, whenever he sees us, he always asks,  ‘O, kumusta na si John-John?’”

They recall their wedding day, which Boots describes as “Tawanan lang kami nang tawanan.” King says, “That is a unique feature of this union, laughter. We have learned to laugh at ourselves.” They point out that they can take a lot of things seriously, but never themselves.

A year after, their love for each other remains so palpable that it fills the room. It is, as King loves to describe it, “meant to be.”

Early on it was hit and miss, though, and as King explains, began with two disasters: “About five years ago, we were being matched without our knowledge; this plan was hatched at my mama’s 96th birthday. I was with friends and family, when Boots walked in with my sister, and then my brother spilled the beans: ‘Mina-match ka dyan,’ he told me. So when she approached us, I just said, ‘Hi, Boots, how are you,’ and then I left.”

His brother ran after him and asked why he was walking out. King’s reply: “You should have forewarned Boots and myself, ’wag niyo kami bibiglain nang ganyan. And I was also not ready because my wife had just died. So that was the end of it.”

Three years later, the matchmakers were at it again. In January 2013, they went on a double date and, over dinner, King’s best friend Raffy put him on the spot and said, “King, ligawan mo na si Boots.” The very gallant and transparent King said, “Boots, I cannot focus on you because I have a dying daughter I have to go to, but when I come back, I will court you. And then I called the waiter and told him, ‘Silbihan mo nang mabuti itong babaeng ito, dahil ito pakakasalan ko pagbalik ko.’”

He came back from abroad the following month and tried to ask her out, but this time Boots got cold feet. In June 2013, King left once more because his daughter’s condition had taken a turn for the worse; he brought her body home in July. Boots came to the wake.

Later he started to seriously court her. November they were engaged, and by January 2014, they were married.

King was dumbfounded—did she say yes? Six days later, he bought her a ring with the help of his mother and sister. “I proposed in her living room and said, ‘Boots, hindi na ako luluhod kasi baka hindi na ako makatayo, will you marry me?’ And she stood up and went to Joey’s (her eldest son) room and said, ‘Look, Joey, see what Tito King gave me.’ And Joey said, ‘Wow.’ And then she went back to where I was, wearing the ring, and I teared up…”

Although they moved in the same circles, prior to being introduced five years ago, they had never really formally met. “I was six years older, she was really more the age of my younger sister and brother. Pete was my high school batchmate at Ateneo,” says King.

“Kilabot yan ng mga biyuda, ng mga hiwalay,” Boots ribs King. “I never really planned on marrying again,” King says. “After my wife died, I invited my two sons to live with me and that was it. I had two families so it was always a full life. I was satisfied.”

So we ask, what changed his mind?

“I never looked for it, but when it stared me in the eye, I did not run away from it. I think dapat ganun talaga—if you look for it, dahil hinahanap mo, maski hindi tama, sasabihin mo ito na, because you want it to be so. Kapag hindi mo hinahanap, darating kung talagang darating,” he says.

Boots says that perhaps one common ground is that “since both of us also had relatively happy marriages, it was not ‘never again.’ We weren’t afraid to try.”

King stresses that a relationship without marriage never entered his mind: “Napakasarap yung when you love each other, you don’t only get pleasure out of it, but it is blessed by God.”

Boots adds that they always talk, at different hours of the day: “I use the term ‘cow-eye.’ When we cow-eye each other, our thought bubble is the same: ‘This is too good to be true.’ We must have done something good in our younger days and this is our reward.”

For his part, King says that sometimes it feels scary because it’s too perfect: “If you lose it, the hurt will be more.”

To which Boots, in a steady and loving tone, retorts: “Given naman iyan, ang kalaban mo talaga in a relationship like ours is time and health, and I think it’s an unwritten agreement that no matter how many or how few years are given to us, we must put life into those years.”

King responds with a stanza from a poem that he had written for their first anniversary: “Anumang panahon sa ami’y ibibigay, magkayakap naming bibigyan ng buhay.”

On their wedding day, the couple’s giveaway was a book of poems he had written during their courtship.

And the poetry continued, proof of which is the book of poems they gave away to their special friends on their wedding anniversary.

He had written her poetry on her birthday, on Valentine’s Day, their monthsaries (imagine that!), and their wedding anniversary.

For their wedding anniversary today, June 14, here is a beautiful excerpt that can perhaps guide young couples and those who have found each other in the autumn of their lives: “Lumipas ang taon na di namalayan/Sapagka’t nalibang sa pagmamahalan/Pulot-gata’y tila walang katapusan/Kapag magkapiling ang magkasintahan…”

To King and Boots, we pray for many more years together. With a union marked by so much love and laughter, and faith as deep as the ocean, a silver anniversary in the sunset of their years is something we can all look forward to.

In the winter of both their lives, God has blessed them with a beautiful second spring.