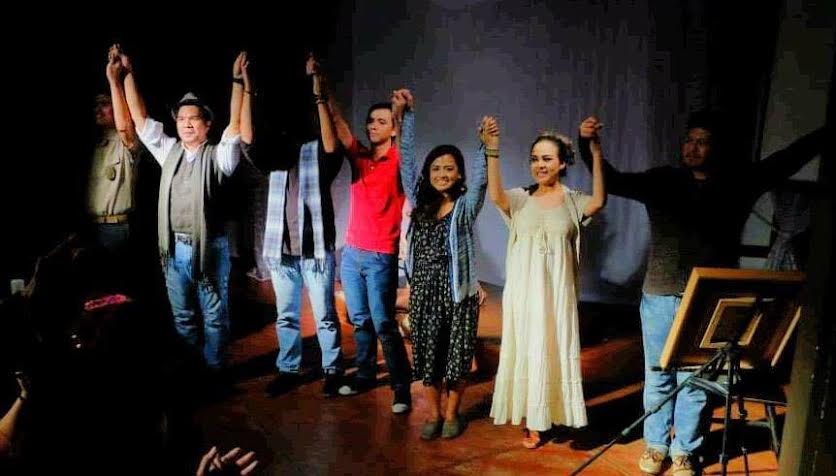 PUCCINI’S “La Boheme” made its debut in Baguio City at the Hill Station of Casa Vallejo last May 31 to deafening applause, with some teary-eyed music-lovers obviously carried away by the opera’s heart-wrenching finale.

Directed by soprano Camille Lopez-Molina, “La Boheme” in chamber music form was set in Baguio with the still-existing Rumours Bar along Session Road as one of the settings.

The young Rodolfo of Carlo Manalac became a Baguio student from Pangasinan. The Mimi of Iona Ventocilla became a graduate of a Baguio weaving school.

Musetta of Myramae Meneses became a native of Cagayan de Oro transported to Baguio City as a night-club singer who got involved with the local police chief—the Alcindoro of Raymond Yadao.

Opening with Mines View Park in the background, Viva Voce’s “La Boheme” was at once intimate and closer to home. Manalac sang with a solid warm tenor sound that was pleasing to the ears. It was a well-liberated ringing sound that you didn’t expect from someone looking so young and unassuming.

Indeed, Manalac has great promise, and he may embody the admonition to the young generation that opera is not about old folks at home on rocking chairs listening to their favorite arias.

His “Che Gelida Manina” started fairly well, strong emotions and all, but he decided he’d rather not risk vocally by going higher in the aria’s most anticipated finale. After all, the opera is not about this well-loved war horse of an aria.

Ventocilla carved a very delicate and highly vulnerable Mimi, aided to a great extent by a ravishing soprano sound that had its great moments in “Mi Chiamano Mimi.” The solid sound was breathtakingly consistent until the death scene, where she proved she could sing and act as well.

As the lead characters had to sound forlorn and gloomy because of unrequited love, the Musetta of Meneses provided the much needed contrast as she sashayed into Rumours Bar launching her signature aria, “Cuando Men Vo,” to great applause. The voice was fresh, the high notes hit their marks well, and her acting sizzled.

There was the feel of youth and rare intensity in the Marcello of Carlo Falcis; the Schunard of Greg de Leon; the Colline of Roby Malubay; and the thoroughly involved Alcindoro of Yadao.

With no orchestra in sight, the piano accompaniment of Farley Asuncion was thoroughly engaging and precise down to the last notes.

The direction of Lopez-Molina left nothing to be desired. She mounted the opera for what it had to offer: a story of doomed love and starving artists amid the cold nights of Baguio.

The brave but highly innovative production might as well be a contemporary case of art imitating life. The organizers had very little resources, with music-loving volunteers providing sets and costumes, including transport and meals for the artists.

It was no doubt a labor of love, and the audience rewarded the cast and production with tumultuous applause and several curtain calls.

The group earlier received a standing ovation for a special performance called “The Evolution of Original Pilipino Music” at University of Baguio, which has put up its Conservatory of Music.)

Although this Baguio version of “La Boheme” was sung in the original Italian libretto, the audience knew what the characters were. (A translation in Filipino flashed by.)

Indeed, the production was portable opera that could be toured anywhere in the country with young singers who could easily connect with the young generation.

“La Boheme” was presented by Cultural Events Organizers with the Hill Station in Baguio City.