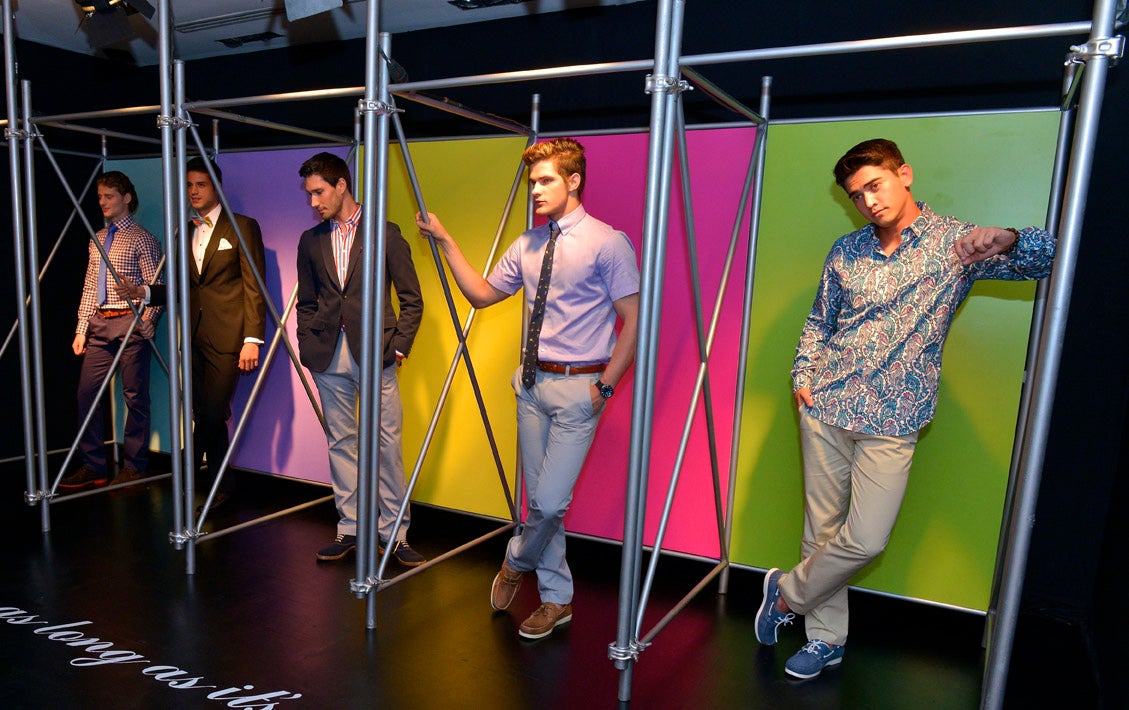 Models pose at the Thomas Pink Boutique at Rustan’s Makati

Did you hear about the launch of Thomas Pink, dahlings, which had Rustan’s Makati packed with buyers and guests?

The British brand brought bold colors to life with a showcase of its new collections through an unconventional way—an art gallery that reflected what the playful Pink label is all about.

Dashing, debonair men dressed in Thomas Pink from head to toe showed off the tailored suits in a tableaux, in colors to fit every mood, personality, and occasion.

With its theme, “Traveling the World,” the Spring/Summer 2015 collection featured a melodramatic fusion of fabrics inspired by globetrotting and sight-seeing: mosaics from India, saturated colors of South America, and lightweight fabrics from the tropics.

With a myriad of textiles, the only common theme running throughout the presentation was the versatility of the reinvented 18th-century men’s brand.

Thomas Pink introduces a new vibrant fashion destination for the men of today. From formal to informal wear, the luxury brand offers shirts for every occasion, among others.

Thomas Pink is at Rustan’s Makati and Rustan’s Shangri-La Plaza.

It was a casting coup, palangga, as seven of the country’s most celebrated photographers got together for a photo exhibit, “24/7/7 Project,” recently held in Bonifacio Global City.

The project was a 24-hour shoot in seven different locations in CamSur. It was proposed by De Leon, and Villafuerte adopted the concept with the help of his father, former governor LRay Villafuerte Jr.

Isaac (for a change, not doing nude photos of men) and Liongoren zoomed their lenses on the pristine beauty of Caramoan, while Black and Verzosa found stunning scenes as they journeyed to the lush Mt. Isarog.

The young, good-looking and passionate Villafuerte was all praises of the results. “We’re glad the photos were able to capture the essence of CamSur’s tour spots—how real, pure and beautiful they are whatever time of day. And we invite tourists, both local and foreign, to see for themselves how even more spectacular these places are in real life,” said the governor.

Run for the Big Apple

Frank Sinatra singing “New York, New York” blared from the speakers, as Philippine Airlines (PAL) recently launched the resumption of its flights to the Big Apple.

More exciting perks await MasterCard cardholders when they use their card to book their PAL flights, Mastercard execs said.

Après the run, two round-trip PAL tickets to New York were raffled off.

PAL tickets to Dubai, Abu Dhabi, Hong Kong and Singapore—onboard the sleek B777 model jets—were also given away, as well as Timex watches, wines by Manny O, and other prizes.