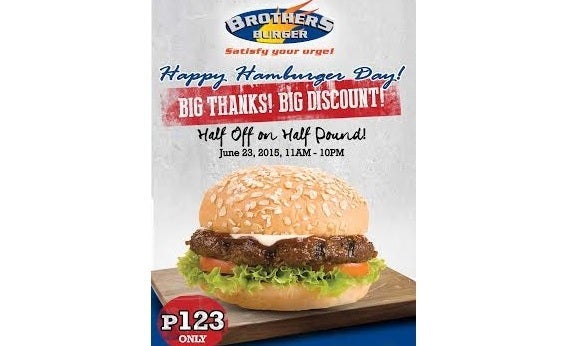 All Brothers Burger stores (except Davao) will participate.

Brothers Burger has also launched Bundle Meals for groups of three and five.

Diners may enjoy three Brothers Burgers, one order of Bucketlist (a choice of Fish & Chips, Hotbites in Buffalo, BBQ or Garlic Parmesan), three  16-oz iced tea or lemonade, and three pieces of Cadbury Chocolate with the Bundle Meal for three persons at P810.

The burger joint is also holding an online anniversary promo through MetroDeal, featuring its signature Brothers Pounder at P199.90 (36 percent off its original prize of P310) until June 22.

Brothers Burger is also holding a contest on social media. Diners may like and follow Brothers Burger on Facebook, Twitter and Instagram to answer unique questions that can win them gift certificates. Promo runs until June 22, with 16 winners to be announced on June 23.