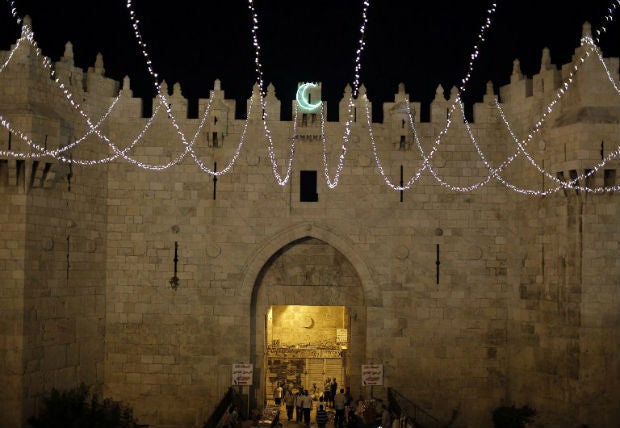 People walk under lights decorating Damascus Gate outside the old city of Jerusalem on June 16, 2015, as Muslims around the world prepare for the announcement of the fasting month of Ramadan. AFP

RIYADH, Saudi Arabia – The Muslim holy fasting month of Ramadan will begin Thursday in Saudi Arabia, the birthplace of Islam and home to its holiest sites, the Royal Court said.

The court announced that, because the crescent moon was not sighted Tuesday, Ramadan will start Thursday.

Authorities had asked the faithful to look for the moon with their naked eyes or telescopes and to notify officials if they saw it.

Elsewhere in the Gulf, Bahrain, the United Arab Emirates and Qatar also announced a Thursday start for Ramadan.

The government of Yemen, exiled in Saudi Arabia because of war in their homeland, similarly said the holy month would begin Thursday in their country.

And in Amman, Jordanian religious authorities said Ramadan would begin there on Thursday.

More than 1.5 billion Muslims around the world will mark the month, during which believers abstain from eating, drinking, smoking and having sex from dawn until sunset.

They also try to avoid evil thoughts and deeds.

Ramadan is sacred to Muslims because tradition says the Quran was revealed to their prophet Mohammed during that month.

It is followed by the Eid al-Fitr festival.