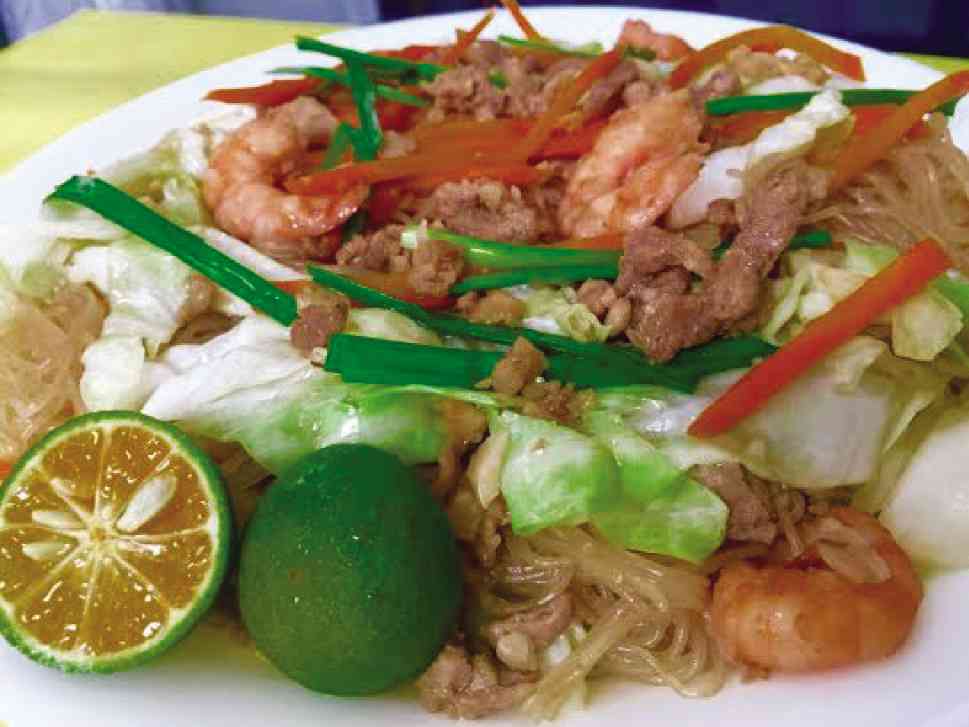 All kinds of ‘pancit’ recipes

I have always loved pancit, cooked any which way, so long as it is delicious.

It was actually the pancit bihon of Ana Yu that triggered my craving to write this piece.

I had it as part of a packed meal she prepared for an affair that I attended. Simple as it was, it was so tasty and I have not stopped thinking of it since.

I am amused by the many ways people enjoy their pancit. To each his own, it seems—those who like just noodles and those who like their noodles loaded with tasty trimmings; some prefer a mix of noodle-types while others, just one particular noodle. Many enjoy eating it even with bread or rice, with a garnishing of calamansi or kamias. In whatever manner, it is a dish that completely satisfies.

I have compiled pancit recipes to add to your recipe collection, including Ana’s Pancit Bihon and the Chinese Culinary Arts Center’s Lu Liong Yu’s Pancit Canton and Chopsuey Noodles.

In a wok, put oil. Saute pork for 1 minute and add shrimp. Remove pork and shrimp, then set aside.

When the broth starts to boil drop the bihon.

Cook until half of the liquid is absorbed by the noodles.

Add the pork, shrimp and all vegetables.

½-1 c chicken stock, depending on how high the heat on wok is. The higher, the lesser is required.

Cook the noodles in boiling water with 1 tbsp oil and 1 tsp salt until tender. Drain and transfer into a tray, let dry.

Heat wok and swirl with 1 tbsp oil. Add in the chicken lard, then the oyster sauce. Stir.

Add in ginger and leeks.

Mix in Chinese cabbage then the noodles.

Add in the stock, light soy sauce and MSG.

Cook until the mixture dries up.

Top with some shredded leeks and Chinese parsley.

For birthdays, some red cherries or dyed red quail eggs may be added.

Since pancit canton has been fried, boiling in water with some oil is a must to remove the stale oil smell in the noodles.

Use only the stem or white portion of the Chinese cabbage (pechay Baguio).

Chicken lard gives that special aroma that you can’t find in other oil.

A slice of ginger

A little carrots, sliced into discs

One-fourth cup of any of the following. The mix of ingredients will depend on you. Though usually a combination of 3-4 kinds meat and seafood are used to make chopsuey—cooked pig’s stomach, shelled shrimps, pork, fresh squid, pig’s liver, kidney, roasted pork or chicken giblets

Boil the noodles in boiling water for 3 to 4 minutes.   Drain and transfer into a tray, let dry.

Parboil all the chopsuey ingredients—meats and seafood. Set aside.

Heat wok, add in 2 tbsp oil, put in the noodles. Cook the noodles until crisp on one side and invert. Do the same on the other side of the noodle.

Drain off the oil and put noodles on a serving plate.

Thicken with cornstarch water and add 1 tbsp of the oil used to cook the noodles to a crisp.

Pour the mixture all over the fried noodles.