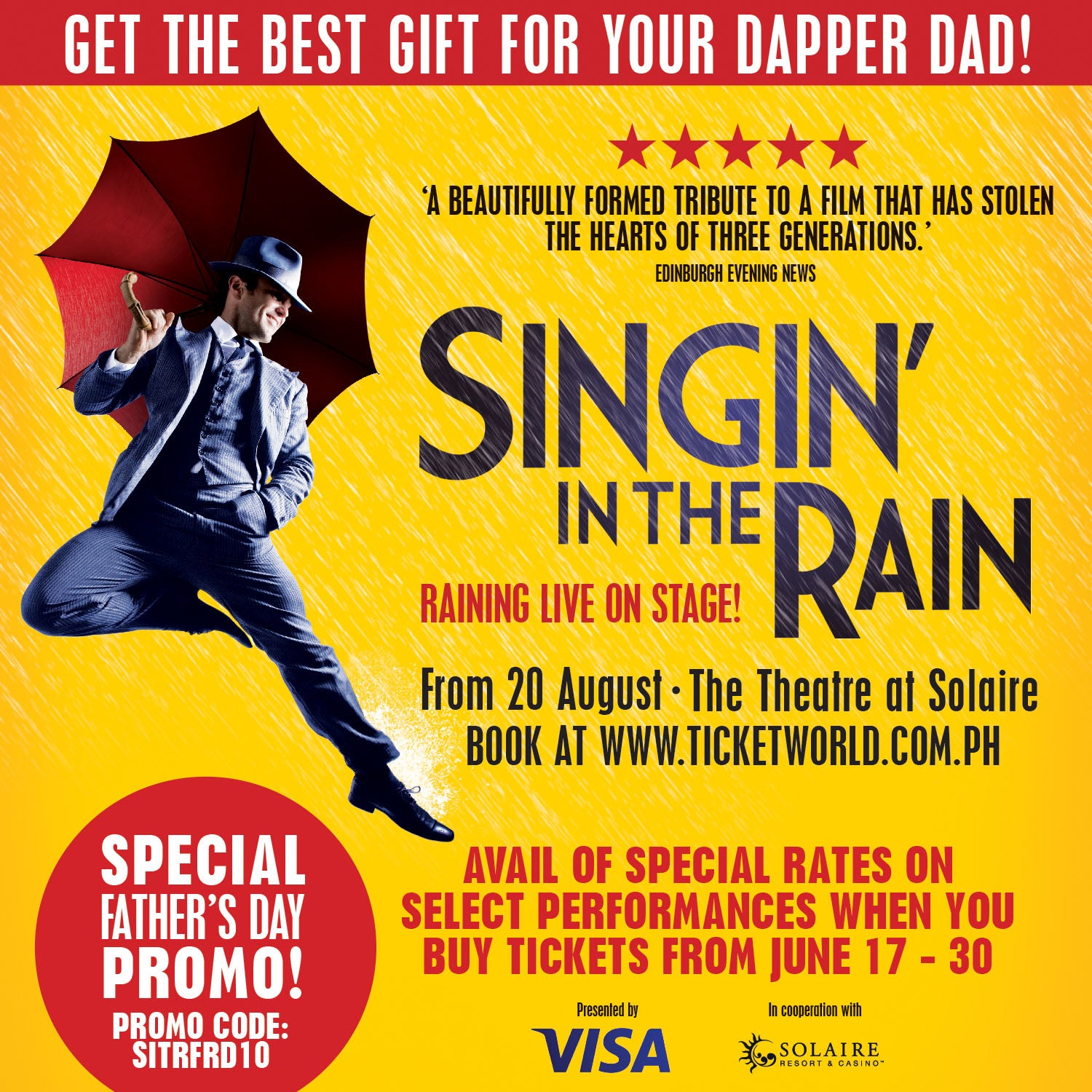 ‘Singin’ In The Rain’s’ splashin’ offers for your dapper dad 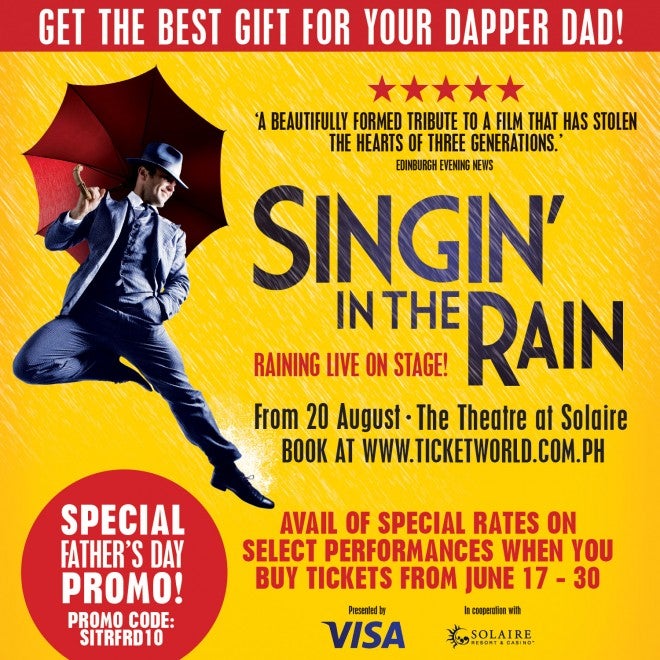 Great news! If you’re looking for the perfect gift for your dapper dad this Father’s Day, why not get him tickets to the funny, feel-good musical “Singin’ In The Rain”?

njoy a 10 percent discount on tickets for select performances when you purchase tickets from June 17 – 30, 2015. Spend time with your leading man. Look back at the good old days and take your dad to see Gene Kelly’s classical movie coming to life onstage. With high-energy choreography, sumptuous set design and costumes, a superb score and a joyous story, “Singin’ In The Rain” showers you with everything you could wish for in a hit musical.

Come and sit on the first 3 rows of the theatre and you will be in for a one-of-a-kind experience. Called “The Splash Zone”, and appropriately so: you will get treated to a generous amount of rain water from the show during some of the dance numbers. “You watch from the back of the stalls and at the interval, they’re all talking to each other like they’re comparing war wounds just to see who got the wettest. I’d say people really, really love it,” says resident rainmaker and technical director Richard Blacksell.

The movie’s iconic choreography is flawlessly recreated, and with the help of 12,000 litres of water, the audience can enjoy one of the most famous dance routines live on stage, with some leaving the theatre a little wetter than when they arrived!

Set in 1927, it tells the story, made famous by Gene Kelly and Debbie Reynolds in the iconic 1952 MGM movie, of the first Hollywood musical, when the silver screen found its voice and left silent movies – and some of its stars – behind. This spectacular production is packed full of the charm, romance, comedy and Tinseltown glamour of one of the world’s best-loved movies and features all the songs from the glorious MGM score including Good Morning, Make ‘em Laugh, Moses Supposes and the classic Singin’ in the Rain.

Leading the cast of 27 as the charming Don Lockwood is Grant Almirall, a seasoned star of musicals who recently triumphed in the role of Frankie Valli in Jersey Boys. Musical star Bethany Dickson, who has recently wowed audiences across China, New Zealand and Singapore with her performance as Maria in The Sound of Music, returns to the stage as the aspiring actress Kathy Selden.

Don Lockwood is a silent movie star with everything he could want – fame, adulation and a well-publicised ‘romance’ with his co-star Lina Lamont. But Hollywood is about to change forever. There is rumour in the studio of a new kind of film, where the actors actually talk…and sing…and dance. Can Don and the uniquely voiced Lina make the transition and will chorus girl Kathy Selden fulfil her dream of stardom and capture Don’s heart along the way?

“Singin’ In The Rain” is produced by Lunchbox Theatrical Productions and Concertus Manila. Co-Presented in Manila by VISA Entertainment in cooperation with Solaire Resort and Casino, “Singin’ In The Rain” will open on August 20 and play for a strictly limited season at The Theatre, Solaire. Book your seats through TicketWorld: call 891-9999 or visit www.ticketworld.com.ph