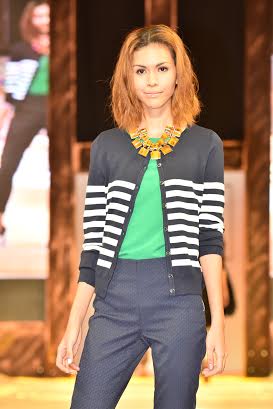 There are two things a Filipino shopper can’t say no to: an “imported” brand and a good bargain.

It’s a winning formula that is, no doubt, the reason the Stores Specialists Inc. (SSI) has quickly grown the British high-street label F&F here. It opened nine stores in just a year, after launching its first in Cebu in 2014.

It unveiled its Manila flagship recently at Glorietta 3, right above Zara, another of SSI’s successful European imports.

The merchandise is a mix of casual and office wear for women and men, athletic wear, kids’ fashion, and some accessories and footwear.

F&F is a fashion brand from the United Kingdom founded in 2001. It has stand-alone shops, outlets in department stores and supermarkets, according to James Marshall, who heads F&F’s global marketing.

The brand is quickly expanding across Central and Southeast Asia and the Middle East.

“We’re an of-the-moment, on-trend international fashion brand with amazing prices. It’s affordable fashion for everybody—men, women and kids,” Marshall said. “Our range is big so we can pretty much adapt to the nuances of each market.”

Marshall said in F&F that ethical fashion is no mere lip service.

“We have an international sourcing team based in Hong Kong who travels globally. We have a rigorous checklist of factories, so if there’s a breach, we either try to fix it or end the contract, depending on the severity. We make sure that employees of the factories are safe, get the right pay, and that the fabrics are ethically sourced.”

In 2013, an eight-story garment factory building collapsed in Bangladesh, killing over 1,000 workers and injuring 2,500 others.

The tragedy has become a wake up call for the garment industry and consumers alike— the former to ensure that their suppliers adhere to laws protecting their workers, and the latter to patronize only ethical brands.

Consumers care, even those who like a good bargain, Marshall said.