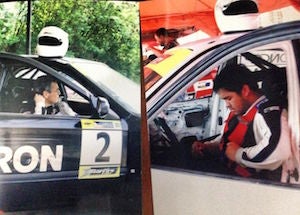 Dad was my hero, the coolest person there ever was. Before there was Superman, there was Dad and no other person could come close to that.

He was not a public figure or someone with thousands of Instagram followers, but rather someone whose influence and kindness made people appreciate and love him.

You might think that this story will just revolve around cars, but what I would really like to talk about are the things I learned from my dad—and how Father’s Day should remind everyone to celebrate the occasion and remember the wisdom of fathers.

Kookie got into the Philippine car racing scene, along with his brothers George, Louis and Miguel, all following in the footsteps of my grandfather Pocholo.

One thing I learned from watching my dad race cars and teach other people how to do it was to treat people fairly. He had time for everyone who needed him. He had good public relations—even if he was having a bad day, he’d always make it a point to greet people or smile at them at the racing track.

He had no bias against anyone, competitor or not. He always reminded me and my brothers the importance of good manners and doing the right thing. This was what made people love and respect him a lot.

Growing up in a motoring environment made me appreciate cars as well. As a child, we would often go to Subic where the family was fortunate enough to operate a racetrack where we could watch drivers do their thing.

Eventually, I also got into racing and absolutely loved it! With Dad as mentor, I learned a lot—more than just how to drive but also about etiquette, what it meant to be a gentleman racer.

‘Do not break the egg’

During lessons on braking and daily driving, he often said: “Do not break the egg”—a simple reminder I also use today when teaching my girlfriend how to drive her own car. What it means is that, when stepping on the brakes, you imagine there is an egg in between the pedal and the floor; squeezing the pedal gently will stop the car in a slow, smooth manner that maximizes the potential of the brakes.

But step abruptly and “the egg” will break, causing the car’s passengers to slightly fling to the edge of their seats. Such a simple reminder taught me how to drive properly, whether on or off the racetrack.

People think that since I’m a third-generation Ramirez, I was pressured by my dad to race fast. But the truth is, one of the things he emphasized was about being smooth: “Because when you drive smoother, you’re quicker.”

He would also constantly tell me during practice rounds that if I wanted to be a good racer I’d have to work my butt off, and never do something half-heartedly. People spend good money to watch and support you, so you should always make it worth their while.

Don’t get me wrong, he wasn’t too strict with me. I remember my first race when my dad trained me; I was 17 and so nervous! Right during my debrief he told me, “Don’t worry, don’t think about your time, just go out and have fun, and you will be fast.”

I finished second but that was okay with me, because to hear the words from my dad that I drove well that day was enough.

It’s been almost four years since my dad passed away, and looking back, his legacy is deeply rooted in his personality and approach. He encouraged car enthusiasts to get into circuit racing through an event called “Run What You Brung” (RWYB)—without having to spend like a professional driver.

RWYB has been around for 17 years. It was where I first raced, and also where my mom discovered and loved the sport.

Since Dad’s passing, we also stopped running RWYB until early this year when my mom, brothers and I brought it back for the love of the sport.

We had some 100 participants; this was the first time I led a project this big without Dad. It got emotional at one point, but it also inspired me further to be a teacher, just like Dad.

These days I have been busy as an instructor, along with my uncles George and Louis, for various car brands. I hope one day I can do, well, just maybe even half of what Dad achieved in his lifetime.

This Father’s Day, let’s celebrate our dads not just for being dads, but also for the lessons they have taught us, for their legacies.

Let’s give it back to these originals who helped mold us into what we are now.