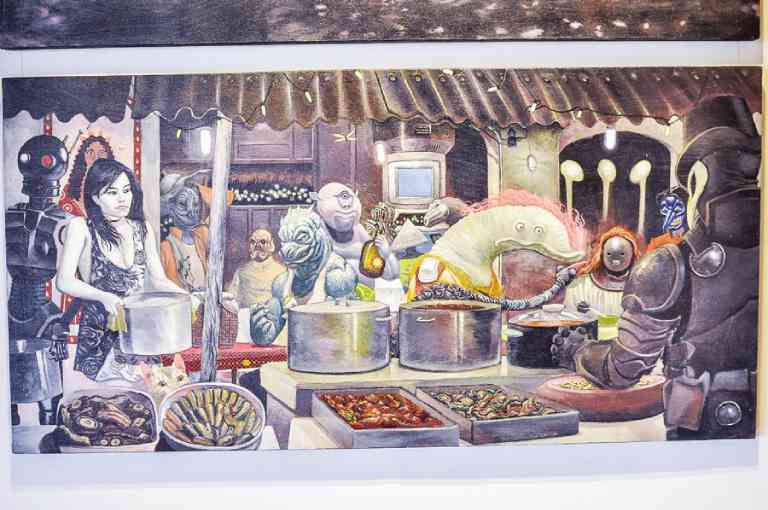 Aside from buying pieces you love, they say the trick to acquiring art is getting it before the artists become big. Thankfully, Qube Gallery has provided us with a guide to the next big names in the Cebu contemporary art world with its rising artists series.

Dubbed “Heirs to the Throne,” the group show featuring Thomas Jopson, Lhee Taneo, Kenichi Wani, Marvin Natural, Wyndelle Remonde and Kidlat is a departure from Qube’s recent shows, which featured some of the most established names in  art, including Sansó, Alvarado and Rubio, and is part of the gallery’s advocacy to help out promising young artists.

“We will show each of them in solo exhibits over the next six months,” Qube Gallery owner Maris Holopainen proudly declared. “We chose the six  because we feel that they represent the next big names in Cebuano art, and they have the potential to change the landscape of the local contemporary art scene.

“Although ‘Heirs to the Throne’ showcases very diverse subjects and styles, the exhibit is consistent in the quality of work and the purity of expression. It’s so nice to hear our regular art patrons say that we raised the bar to a new level with this show.”

Here is a quick look at each of the bright-eyed young artists.

Kenichi Wani—You can spot his paintings a mile away with their trademark big, round heads and eyes. Some say the characters remind them of the artist himself—and a playful, childlike humor that he describes as cute and eerie at the same time.

Using primarily oil on canvas, the 30-year-old Japanese-Filipino artist uses cotton candy colors to portray natural landscapes as a setting for big and small characters to play in, and his works always show a sense of wonder and adventure.

Drawing inspiration from comics and animated film, his surrealistic works border on magical realism and fantasy art using elements from the medieval era, and have landed him storyboard and conceptual art projects in many Cebuano films.

As a kid, he would play with makeshift action figures, which he would sculpt out of old rubber slippers.

A University of the Philippines  Cebu Fine Arts graduate, the multifaceted artist uses ink, acrylic and watercolor to create portraits and landscapes, and is known for his spontaneous portraits, where he sketches people into situations in his imagination.

Marvin Natural—The most senior of the group, the self-taught painter has gained recognition in  national level competitions, such as the Metrobank Art & Design Excellence and the

In 2010 and 2014, he won the Juror’s Award for Excellence in the Philippine Art Awards, and remains one of the most active players in Cebu’s visual arts scene. He recently joined a group show in Paris, and for “Heirs to the Throne,” his social realist paintings capture the innocence and vulnerability of today’s youth.

Kidlat—Considered the Banksy of Cebu, the 34-year-old art school dropout pursued his passion for art in the streets of Cebu, and,  with a few other street artists, founded the street art groups Ubec Crew and the Junks Collective.

He is now known as one of the go-to conceptual artists, and  brings a sophistication to street art that aims to communicate with all levels of society.

His works are inspired by his own experiences and observations of  surroundings, which he interprets in minimalist compositions using black and white with pops of color.

Lhee Isabel Taneo—The only female in the group and, at 22, the youngest, this multi-media artist and UP Cebu Fine Arts graduate plays with light and shadow using the natural colors and textures found in shells.

She painstakingly dyes the shells to create mosaics, and patterns every piece in her mosaic meticulously, using the smaller variations of shells to achieve detailed images.

Her rest house in Olanggo Island, a 20-minute boat ride  from her home in Mactan, serves as the venue for her to reconnect with the sea and the shore, the two constant inspirations for her art. “I try to elevate the use of shells from mere shell crafts into an art form,” she explains.

For Lhee, her art highlights the simplicity and versatility of our country’s indigenous materials, creating art that is truly born from

Wyndelle Remonde—With his striking, youth-inspired visuals, the 28-year-old is one of the local art scene’s social media darlings. Drawing inspiration from pop art and graphic art using experimental techniques, including spray paint and silkscreen, he incorporates his every-day life experiences into his work and compares himself with the trademark character in his paintings, the “Kayod Kalabaw,” a symbol of hard work and patience.

His love for art has him constantly playing with different mediums and platforms, and his striking visuals in bright colors and clean lines have earned him a cult following among today’s youth.