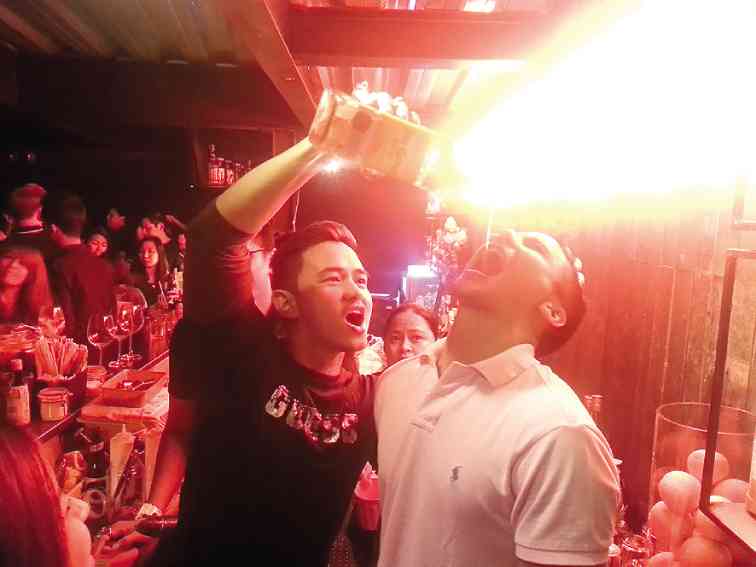 Going to the Makati bar called Finders Keepers (FK) at midnight is like stumbling into a mysterious dive where only a few brave souls dare to tread.

You won’t even think it’s there, sitting surreptitiously among warehouses in a business compound, no sign outside, just black curtains leading to a plain-looking door guarded by burly bouncers. If this were a movie, the next scene could reveal a drug den. But it is not.

A few seconds later we feel unusually relaxed among total strangers in a cramped space good only for 50.

Heading to the bar, behind which the neon sign “Finders Keepers” confirms this is the right place, we find that the drink list carries mostly imported beers, the only local brand being Cerveza Negra (P160)—whose malty taste goes well with the newfound surroundings.

“The crowd here has good breeding,” our companion tells us. How can you tell, we ask. “Because they say ‘excuse me’ when squeezing their way behind us.”

Two young women at the bar smile as they dance to Justin Timberlake, Robin Thicke, Outkast, among other R&B tracks blasting at tolerable volume. The girls turn out to be sisters—Debbie and Jane Macasiano, the latter telling us that she’s a pilot for chartered planes, and that she likes this bar because she can come here alone without feeling lost.

Looking around, we notice that everyone here is young, including the bar staff, one of whom asks us: “What are you drinking?”

Before we can answer, the bartender gives us more Cerveza Negras—on the house! Now we feel really welcome as a first-time guest.

Is it always this fun every night, we ask generous bartender. Most of the time, he says, adding that FK’s owner, Borgy Manotoc, might drop in.

As the music gets hotter, a guy celebrating his birthday is called inside the bar; generous bartender pours tequila straight into birthday boy’s open mouth. He winces, smiles and flashes a thumbs up before introducing himself.

Everybody’s dancing now, but suddenly the music stops—a lady is tinkering with the music player but can’t seem to decide what to do next.

Birthday boy laughs and helps clueless lady, who returns to her seat.

A few minutes before 3 a.m. the bartender hands us two shot glasses of tequila—courtesy of birthday boy, he says.

Before getting too happy and drunk, we wave goodbye to new friends, never mind if there’s no sign of Borgy.

Janice in the zone

Farther south, at the boundary of Sucat and Alabang, is 19 East—also a bar but much bigger than Finders Keepers. We always find time to visit it, especially when the band South Border is playing. On a Thursday night the place is almost full, one table occupied by Janice de Belen and friends.

Recognizing us, Janice, casually dressed in black shirt and ripped jeans, is all smiles as she drinks red wine and sings along to the band’s lilting cover of Stevie Wonder’s “Knocks Me Off My Feet.”

After a few minutes we join Janice’s table as the wine keeps coming, but we stick to Pale Pilsen.

South Border main composer and keyboardist Jay Durias leads the band in a three-song stretch of Bruno Mars and Daft Punk covers—his favored way to induce dancing among the crowd.

Janice and friends rise to the occasion and groove to the beat, their arms flailing and heads shaking. Janice is losing herself in the zone, and it looks like she won’t allow Jay and the band to stop this party.

When the music finally stops around 2 a.m. we think of ribbing Janice to shed light on her latest rumored romance—but what she talks about instead are why her kids are watching the coming Chris Brown concert, and her love of K-Pop.

Mon Espia at My Bro’s Mustache

For the laid-back baby boomer crowd, there’s the reopened and spruced-up My Bro’s Mustache in Quezon City, where Mon Espia of Labuyo and Powerplay fame performs solo on acoustic guitar every Tuesday night.

Espia’s voice has not lost its earnest emotion and he plays acoustic guitar quite well, even managing to do lead solos on a few numbers. His version of “Ang Aking Awitin” sounds a bit better than Side A’s—whose drummer Ernie Severino, guitarist Leevon Cailao, and bassist Ned Esguerra drop in to say hi to Mon after attending the media launch of the interpreters for Philpop 2015’s 12 finalists including Ned’s song, “For the Rest of My Life.”