Solidaridad at 50:‘There’s nothing like holding a book’ | Lifestyle.INQ ❮ ❯ 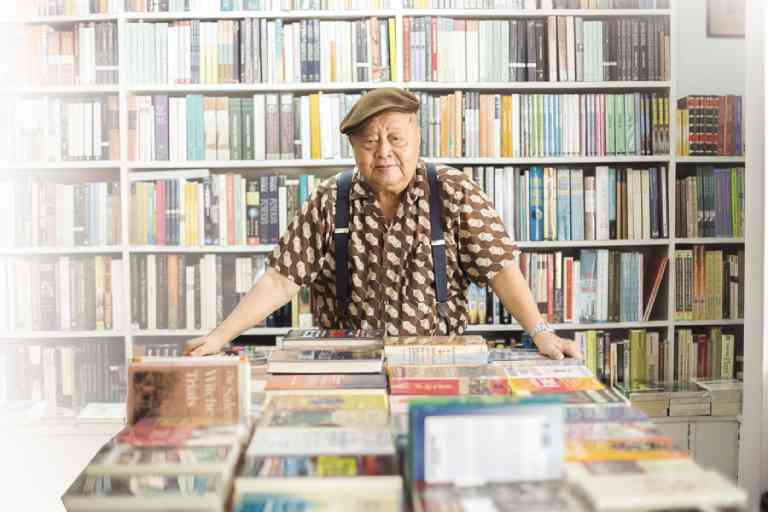 Amid dire predictions that the printed word will not survive in the new century, Solidaridad is marking its half-a-century anniversary, without a doubt the most famous bookstore-cum-cultural hub in Southeast Asia.

Its longevity and resilience are reflected not only in the respectable address it has kept since the start—its famous address on Padre Faura Street near the corner of Adriatico Street in the historically colorful Manila district of Ermita—but also in the person of its founder, National Artist for Literature F. Sionil José, who’s turning 91 in December.

José was working as an information officer for the Colombo Plan in Sri Lanka (then Ceylon) in the early 1960s when he thought of setting up a bookstore.

In an interview with Lifestyle Inquirer, he said his job paid very well, but he found it very boring. At that time, he was receiving an annual grant of $10,000 from the Congress for Cultural Freedom of the United States to set up a journal, which was to become Solidarity, the famous journal of the arts and humanities of Southeast Asia.

The organization sponsored several publications, including Encounter in Germany and Preuves in Frances. With the grant, and the money he save from his work at Colombo Plan, he came back to the Philippines to start a publishing house.

He was looking for a place to have an office for his publishing house and journal. His father-in-law told him to check out the old family house in Ermita, which was owned by the Jovellanos. He found the place too big, so his wife Tessie Jovellanos suggested turning it into a bookshop.

And in June 1965, they opened the Solidaridad Book Shop.

Solidaridad Publishing House was put up the same year the bookstore opened. It was inaugurated by Carlos P. Romulo’s “Identity and Change: Toward a National Definition.”

José started a series of seminars and conferences on pressing concerns of the Philippines and Southeast Asia, the documentations of which were published by his publishing house.

The bookstore also became the headquarters of the Philippine Center of International PEN (Poets and Playwrights, Essayists, Novelists), which José founded in 1957, when he was just 35 years old.

Many national and international personalities have visited the Solidaridad Book Shop through the decades. Among them are three Nobel Prize laureates—Wole Soyinka of Nigeria, Günter Grass of Germany, and Mario Vargas Llosa of Peru. Many members of the nearby Supreme Court and Court of Appeals have also been frequent visitors.

“When [Ninoy] was in jail, I used to gather books for him,” José said. “Then Cory [Aquino] would bring them to him. He would return what he did not like. Half of his library came from this bookshop.”

One Sunday morning, José, still in his shorts, was helping his family clean the bookstore, when suddenly a Mercedes-Benz limousine stopped in front of the establishment. Out came Adam Malik, the then foreign minister of Indonesia. He said he had heard about the bookstore and decided to drop by.

The princess of Thailand, Maha Chakri Sirindhorn, came to the Philippines to receive her Ramon Magsaysay Award in 1991. Upon her arrival, the first place she visited was Solidaridad.

Tessie, José’s wife, said that when they were starting out, they received help from Joaquin Po of Popular Bookstore and Socorro Cáncio-Ramos of National Book Store, where they got some of their books when their shipment from abroad had not yet arrived.

Tessie said that all of the books went through his husband’s judgment before they would be offered for purchase. She said he was very fastidious and would reject books he did not like.

José lamented that Filipinos didn’t read their own authors. He said this abets the colonization of Filipino minds.

José said that many foreign scholars would come to the bookstore, and they would be surprised to find the books they had long been looking for.

The problem with most bookstores, José pointed out, is that they clear out the books when they remain in the shelf for a long time.

In 1967, José was tagged an agent of the US Central Intelligence Agency (CIA) and his bookstore a “CIA front” when a US press agency reported that the Congress for Cultural Freedom was partly funded by the CIA.

José said he worried that the family’s only source of livelihood would be jeopardized. However, in a funny turn of events, José found the next day many people flocking to the bookstore, perhaps wanting to see what a CIA front looked like.

Around the same time, an American Embassy official labeled him a communist after noticing José’s demands regarding the withdrawal of the American bases from the Philippines. He sued for libel and received pro bono assistance from a young lawyer, Romeo Veloria. Veloria asked the defendant in court to read the anti-American articles published in Solidarity. The defendant found none, and José won the case.

José noted that even to this day, some people think that he has a connection with the CIA.

If he’s not being linked to the CIA or the communists, José said he’s being blamed for tall tales about ghosts. He swears there’s a resident ghost at Solidaridad.

“Journalists are the most skeptical people in the world, until it happened,” he said. “I believe in paranormal phenomena which you could not explain rationally. When we first came here, evidences [of a ghost] were clear to us, like doors banging even though there was no wind. One of the waiters during an event said there was an old woman in the store room.”

He said that National Artist for Literature Nick Joaquin was himself a witness to the ghost. Joaquin frequented the Solidaridad when he was still alive and used it as his mail drop.

“If [Nick] wanted to meet people or have an interview, they would course it through my wife,” José said. “We were best of friends, Nick and I. But when you hear us argue, you’d think we are the worst of enemies.”

José recalled the time when Joaquin came rushing down the stairs, his face all flustered. When they asked him what was wrong, he said that he saw “someone” upstairs.

There were also a few instances when José and Joaquin were arguing loudly and a thick pile of records fell in front of them, hushing them instantly.

“One time, the wife of former Associate Justice of the Supreme Court Pacifico de Castro came to see me,” José recalled. “When she opened the door, she immediately said there was a presence here. She was a clairvoyant. But she said I shouldn’t worry. The ghost is not malignant; she’s just naughty. She’s about 16 years old.”

Last year, José was woken in his sleep when he heard someone say “kuya” to him. He got up to see a young woman, about 16 years old, chinky-eyed, wearing a red blouse and a black skirt.

It was his first time to see the “naughty” ghost.

When Solidaridad was set up, the only bookstores around in the metro were Alemar’s, National Book Store and Po’s Bookstore in Doroteo José Street, Santa Cruz, Manila.

In 1968, architect Luis Ma. Zaragoza Araneta asked José to open Solidaridad branches in Cubao and Makati. He offered the writer capital that would last him and the bookstore five years.

But José refused the generous offer because the business would take much of his time —he wanted to devote most of his time to writing novels. He also did not want to pass the burden to his wife who was raising their children.

José noted that bookstores around the world were dying out. He said that some, like his bookstore, persist because they own the building. He explained that Solidaridad would have died long ago if it had been merely renting space—rent prices having escalated over the decades. José added specialty bookstores are hardly appreciated in the country. He pointed out that there was not one real antiquarian bookstore in the country.

José likewise lamented that there were fewer young writers joining the Philippine Center of International PEN, which holds its regular general assembly at Solidaridad every last Saturday of the month.

“I started PEN when I was 35 years old,” he said. “There should be more young people in the organization. As it is, we are all octogenarians here. So young people should come.”

“There are so many good young writers,” José said. But he deplored that they were self-absorbed and very individualistic.

“Young people like to talk among themselves,” said José. “They never try to get in touch with their elders like I did. When I got back to college in 1946 after the war, I made it a point to know the generation ahead of me. The war matured us. We knew hunger, fear, anxiety, hatred, everything. I knew it was more important for me to know the older generation.”

A nonagenarian who loves to argue and holds very controversial views, including the need for a genuine revolution in Philippine society, José is obviously kept young by his intellectual passions.

“[Solidaridad] gives me great pleasure because it keeps me up to date on literature and writers,” he said. “I know what’s happening.”

“The bookstore will go on,” declared F. Sionil José, “in spite of the fact that more and more people read digital copies of books. But the truth is, there’s nothing like holding a book.”