By now, you would have thought that writers would have run out of ways to depict dystopian society. But writer Pierce Brown had one more good idea up his sci-fi sleeve, a most colorful one.

In 2014, Brown’s debut novel “Red Rising” invaded bookshelves and its central conceit didn’t seem like it would enable it to stand out. In this version of our universe, mankind has colonized the stars but has genetically modified humanity so that everyone belonged to a caste—a color—that determined your entire destiny.

Golds are the powerful, perfect ruling class, and the Reds the lowest working class. In between you had everything from the warlike Obsidians and the military Grays to the creative Violets and the scientific Yellows.

In case you’re curious, the author’s surname—Brown—represents servants of the home, so no fictional favoritism there. But beyond just the color-coded idea of human society, Brown brought two things to “Red Rising” which proved special: powerful prose and a winning protagonist.

Darrow is born a Red on Mars, doomed to a life toiling in the mines. But a personal tragedy sets him to do something he never dreamed of: Taking down the society that oppressed him and so many. So he infiltrates the Learning Institute to take on the identity of a Gold. Once he rises high enough, he will destroy the society.

That’s the heart of “Red Rising,” what turned out to be the first of a trilogy. By now, it’s easy to roll your eyes and picture yet another dystopian trilogy. But Brown has constructed a brutal yet believable universe and his pages are packed full of detail and drama. This is not a Young Adult book, and so the chapters are full of death and destruction. The first book establishes who Darrow is and why he is doing what it is he’s doing. “I want to declare what I am,” he says later. “I want to declare war.”

The second and newest book, “Golden Son: Book II of the Red Rising Trilogy” (Del Rey, New York, 2015, 446 pages) is bigger and better. Now that Darrow, now 20, is part of the illustrious House Augustus, he has gained the callsign “Reaper” because of his skill in combat. 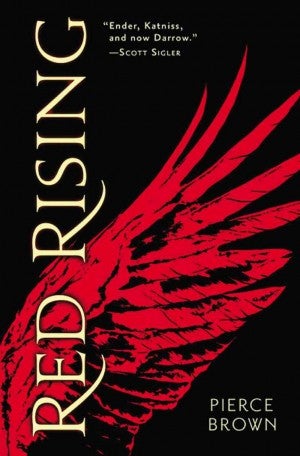 “Golden Son” is full to the brim with its many massive action scenes as entire squadrons of ships mass against each other for the honor of their houses. At one point, the space battles remind one of those from the Warhammer role-playing games. The ambitious House Bellona is clearly targeting House Augustus and Darrow fights for his life constantly, armed with his instincts and wits, something almost as dangerous as the franchise’s space armor and shape-shifting razors.

But there may be a bigger conspiracy at work and Darrow must figure out how to expose and fight it if his house is to survive. Yet at the same time, Darrow is secretly working for an insurgent group called the Sons of Ares with the shared goal of bringing down the houses. Who is Darrow really working for? What does he really want? “What do you live for,” he asks.

It is clear that Brown has created an agent for violent change to be remembered; not for nothing has Darrow been compared to “Ender’s Game” hero Ender Wiggins and “The Hunger Games” heroine Katniss Everdeen. True enough, elements of some of the best sci-fi show up in the DNA of the Red Rising books. But then Brown takes those and runs the reader through with his pen. The secrecy, the desperation, the violence and the space operatic elements of “Golden Son” drag the readers into a new vision of ambition and evolution.

It’s smart enough to impress the sci-fi loyalists but twisty and bloody enough to win over everyone else. In what seems to be an industry standard practice for middle volumes in trilogies, “Golden Sun” ends on a furious cliffhanger.

Brown isn’t done yet as the concluding volume of his saga, “Morning Star,” is due out in 2016. Last year, Universal Pictures won the frenzied, expensive auction for the rights to “Red Rising,” with “World War Z” director Marc Forster to direct the film.

Find out why Universal spent so much on the first novel from a neophyte author. Fall in with “Red Rising” and “Golden Son”—conquer the universe with Pierce Brown.