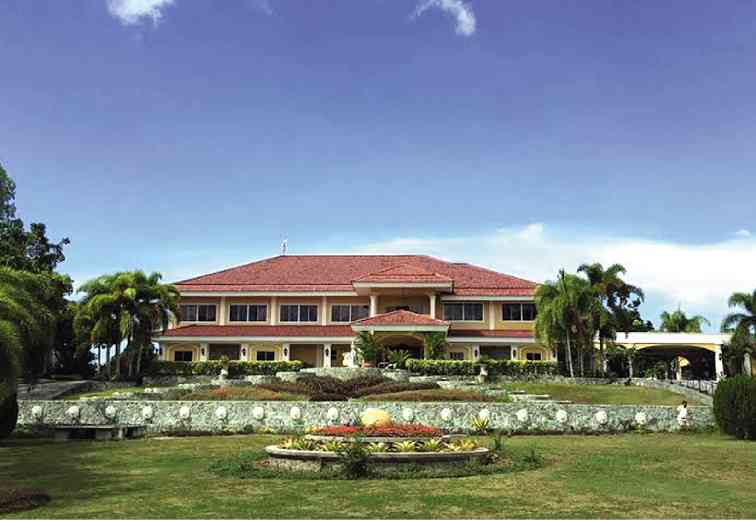 A Mediterranean-inspired resort in Baclayon town, Bohol, may look at first blush like your typical tropical summer getaway. But the luxury resort packs surprises that only keen observers would recognize.

Nestled on top of a hill and overlooking the islands of Panglao, Pamilacan and Camiguin is the Peacock Garden Resort, owned by German Hans Schoof, former commander of the Order of the Knights of Rizal.

Aside from its guest rooms, infinity pool, spa, games area and other facilities on a sprawling four-hectare property, the resort’s main showcase is its main building, where antique furniture, archival materials and paintings are part of its interior design.

Guests are welcomed by the busts of national hero Dr. Jose Rizal and his best friend Ferdinand Blumentritt and a set of chairs once owned by Pastor Karl Ullmer in the Vicarage of Wilhelmsfeld-Heidelberg and used by Rizal during his stay in Germany in 1886.

They have been donated to the resort owner and his wife for their “outstanding contributions to the Knights of Rizal” in the vicarage.

At the resort’s Old Heidelberg restaurant, guests and visitors use 19th-century, all-original wooden chairs and cabinets from Europe. Late-19th-century and turn-of-the-20th-century postcards of places visited by Rizal in Europe adorn the walls. Old Philippine legal tenders featuring Rizal are being displayed.

Century-old paintings hang on the walls of the two-story main building. Memorabilia include late-19th to early 20th-century invitations and menu, including those from Otto von Bismarck, first German chancellor.

The collection of wines at the resort’s wine cellar is also notable since each came from the year Rizal was executed (1896), the year Philippine independence was declared (1898), as well as the birth year of the owner. The oldest from the collection is an 1825 bottle of wine from Madeira, Spain.

Opened in 2008, the place was originally not intended to be a resort but a restaurant to exhaust the owner’s “creative industries in cooking.”

“Most of the items here are a hodgepodge, a collection of sort. We have the Rizal chair. The chairs we are sitting on are from 19th-century castles and mansions in Germany,” said Amanda Schoof, deputy general manager.

Her husband is Chris Schoof, general manager and son of Hans.

Chris said his father curated the items on display.

“A couple of them are heirlooms, some of them acquired through auctions,” he said. “These items are from the time Rizal was actually in Europe. This is what Rizal would have walked into.”

Most of the Rizal memorabilia are still in the private collection of his father, who is gradually Wbringing them out for display.

“It’s our own take on the whole East meets West concept,” said Amanda. “You see the architecture is very Western. At first glance, the chairs, the cabinets seem to have no connection with the Philippines.”

“But as you go deeper along, you find out that there’s actually a real story involved,” she explained, giving Rizal as an example.

“Rizal was a Filipino scholar who opened his world view and traveled to the West and brought back all the enlightened sentiment and shared it with his countrymen, so that’s an East meets West journey.”

The owner, on the other hand, is a West meets East story, she said.

“So it’s all sort of woven into little touches that make the hotel story unique.”