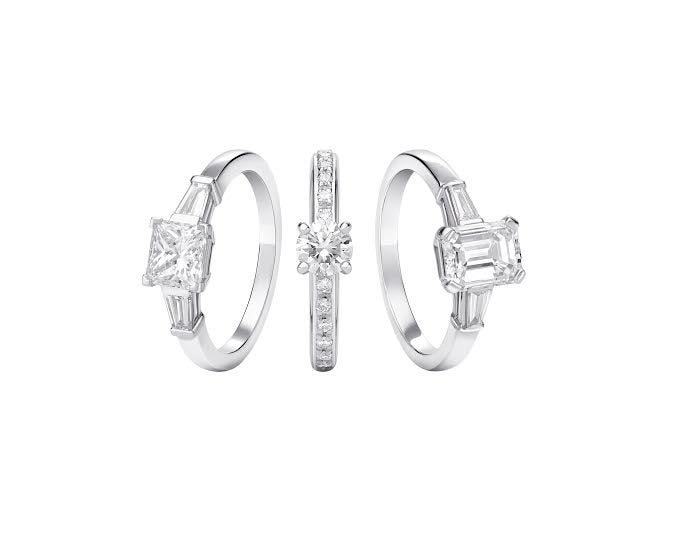 Planning to put a ring on it? Gentlemen, take a hint: Bulgari in the Philippines now carries the full collection of its Bulgari Bridal line, engagement rings and wedding bands that were available only, in Asia, in the Italian jeweler’s Japan stores.

Bulgari unveiled the collection last Tuesday in a bridal exhibit at The Gallery of Greenbelt 5, Makati. (It runs until June 30 before it’s moved to Rustan’s Tower in Shangri-La Plaza Mall.)

The exhibit has exquisite samples of the Bulgari Bridal Collection’s range of styles, as well as elements that evoke the elegance of a union involving Bulgari jewels: a fully beaded dress by Veluz Reyes worn by a society bride; a three-tier cake adorned only by an edible replica of a gold Bulgari Serpenti necklace by Penk Ching of Pastry Bin; and floral art by Zenas Pineda.

‘Wear It with Love’

The Philippine launch coincides with the brand’s global bridal campaign, “Wear It With Love,” a line borrowed from famous Bulgari collector Elizabeth Taylor.

The Hollywood icon wrote the dedication to the new owners of a Bulgari piece—a magnificent 7.40-carat Colombian emerald ring surrounded by 12 pear-shaped diamonds, a present from her great love Richard Burton—which she auctioned off to benefit her AIDS foundation. (Bulgari repurchased it in 2011.)

The campaign also highlights the romantic city of Rome—the source of inspiration for many of Bulgari famous jewelry—as the setting of many a passionate love affairs, not least among them that of Taylor and Burton, who fell in love with each other while filming in the ancient Italian capital in 1961.

Bulgari Bridal comes in a range of styles, including pieces from its classic lines such as Serpenti and B.zero1, collections of which may entice even those not planning to wed, or already are.

There’s also the 1503 style, named after the year the first engagement ring was exchanged in Venice. It’s a solitaire diamond set in a pavé background, available from .30 carats.

The Marryme line is more modern and architectural, the platinum wedding bands discreet and slick, while the engagement ring has a round brilliant-cut diamond.

A more ornate style called Corona, named after the crown of flowers worn by Italian brides in traditional weddings.

A sample in the exhibit has an emerald-cut diamond at the center, with a diamond on each shoulder.

The Greenbelt 4 boutique has the entire collection, including engagement rings with up to “2 carats, D color” diamonds, according to Mario Katigbak, country manager.

Bulgari uses only the stones up from D to H color, the top range as classified by the Gemological Institute of America. Color is rated from D to Z, in descending order, with lesser color having a higher value.

To the untrained eye, diamonds may all seem colorless, but lower-quality ones tend to be slightly yellow to brown.

Bulgari also uses diamonds only from the top five grades—there are 11—IF (internally flawless) to VS (very slightly included, which means it has minor inclusions or flaws visible only to the trained eye via 10x magnification).

We’re no seers, but we’re betting it’s harder to say no to a marriage proposal when you’re sealing the deal with a Bulgari diamond.

The brand doesn’t publish its prices, but we learned that a B.zero1 band in 18-karat yellow gold sans diamonds starts at about P55,000. Sky’s the limit from thereon.

Ladies, your turn to drop a hint.