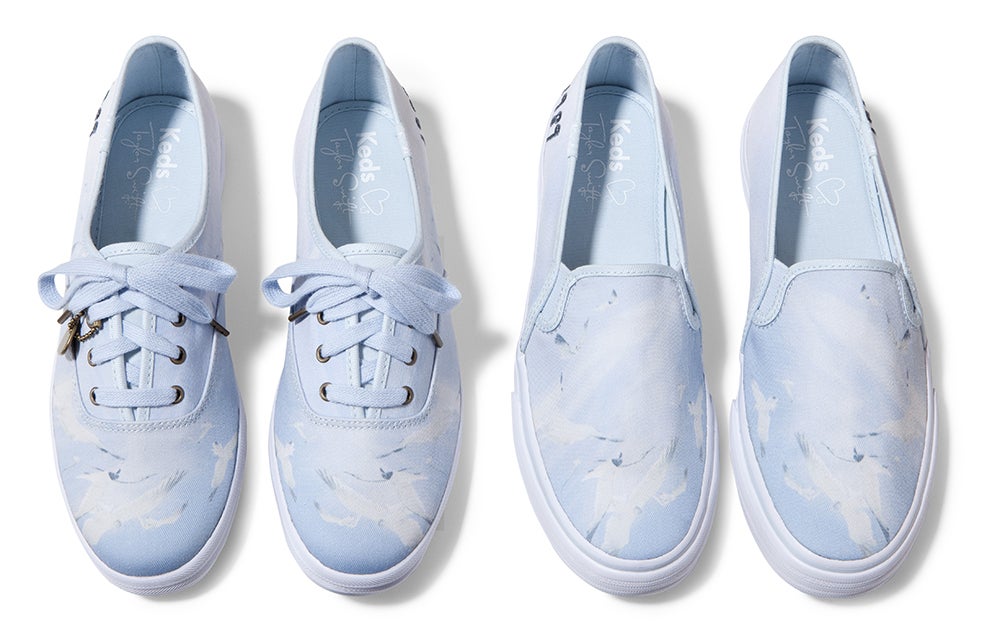 Sneaky Cat is back!

There were many reasons to love Taylor Swift these past couple of weeks (or any other week, actually): She helped a couple announce their first pregnancy, she schooled “OK Magazine” on feminism, and, with the power of a single Tumblr post, she changed Apple’s mind about its plan not to pay artists during Apple Music’s free trial.

Taylor crashed into our consciousness in one other adorable way: Sneaky Cat.

Since 2013, Taylor’s partnership with Keds has resulted in collection after collection of cute sneakers. Last year, to coincide with the launch of “1989,” Keds released Sneaky Cat, a celebration of her new album and a tribute to Tay-Tay’s love for cats. (Tell us, who wouldn’t be in love with little Olivia Benson?)

Sneaky Cat, black sneakers in Keds’ classic Champion silhouette, features charming details: a curious cat peeking from the side of each shoe and Taylor’s birthday printed in gold in her handwriting. Each pair comes with a gold Taylor Swift charm and two pairs of laces.

Like the album, the shoe was a big hit with Swifties all over the world, including the Philippines. “There was a global announcement end of August and, from that day until October, a lot of fans were clamoring and inquiring about the pair,” said Alessa Arevalo, Keds’ marketing associate.

At a “1989” album launch party in Manila in November, Keds sold 48 pairs in just two hours. Sneaky Cat was released in stores the following week, and all stocks were gone before Christmas, resulting in some Instagram meltdowns from brokenhearted fans who missed out on the chance to grab a pair.

But last week, when we dropped by Keds inUP Town Center, we were greeted by a beautiful sight.

Sneaky Cat is back and, aside from the beloved black, it also comes in a new color—cream.

Sneaky Cat Cream features the same purrfect elements: the peeping kitty, Taylor’s birthday in gold and the gold charm. We’re sure this limited-edition model will sell out, too.

The 1989 shoe, which celebrates Taylor Swift’s “The 1989 World Tour,” is a pretty sky blue printed with seagulls—yep, just like the ones on the shirt she wears on her album cover.

Alessa said, “Fun trivia: The seagull on Taylor Swift’s ‘1989’ album is inspired by a real seagull that she named GeorgeWashington!”

The 1989 shoe comes in two styles: the classic Champion, which comes with two sets of laces and a Taylor Swift charm, and the lace-free 1989 Slip-On Double Decker. Both models have 1989 embroidered on the heel.

“The sneakers are a unique and fun memento of the concert experience, and are the perfect way to top off concert looks while dancing the night away,” said Keds president Chris Lindner.

Fans wore their 1989 pairs to Taylor’s concert in Amsterdam, while others have grabbed pairs while waiting for the tour to hit their cities. No final word yet if and when the World Tour will make a Philippine stop, but we’re buying the shoes and keeping our paws crossed.