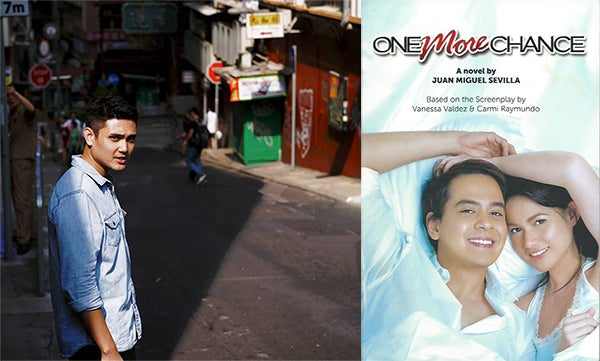 THE AUTHOR (PHOTO BY PONG IGNACIO) and his first novel

It was 4 a.m. when I finally clicked “send” on the e-mail with the fourth draft of the “One More Chance” manuscript attached. It was a weekday, and I needed to get up in three hours to go to work. I scrolled through messages and e-mails from the creative team, asking if I am able to meet the deadline. The last reminder was sent a week ago.

My e-mail had no message and no subject, prompting Google to ask me if I was sure.

Before I wrote for movies, I dreamt of becoming a novelist. As a kid, I thought being a novelist was the pinnacle of what a writer should be. As a teenager, I would sketch the book cover of the medieval fantasy epic I knew I would someday write. I even started writing it in high school, only to delete it after three chapters of nerdy drivel.

I suspect every writer has an unfinished novel stashed somewhere in their hard drive, right between the downloaded TV series and podcast folders. For me, more than making films, which was what I did for a time, it was really all about being a novelist—nothing else mattered.

So I clicked yes, answering Google’s slightly condescending question, and suddenly became one.

The reality is always unceremonious. There was no fanfare. No popped bottles of champagne or celebratory cigar—just tired eyes that needed to be open in a couple of hours to go to work.

It was around Christmas of 2014 when one of the original screenwriters of “One More Chance” approached me to write the project. I was hesitant, of course. First off, how do you write something that arguably reached its zenith in film form?

Second, why risk messing with people’s love and memory of the film?

Third, how can words replace the performances, cinematography and direction of the film?

And last, do I really want this to become my first novel?

I began to question my integrity (seriously!), and whether or not I just really wanted bragging rights to being called a published author. Is this the easy way out to being published? And wouldn’t I prefer my first novel to be an original? Is this what I had in mind when I dreamt of becoming a novelist? I joked with one of the screenwriters (who also happen to be friends and mentors of mine) that this might be one of those rare times that the movie is better than the book.

Before moving abroad, I worked for Star Cinema, writing and cowriting four movies, three of which starred Popoy himself, John Lloyd Cruz.

Around Star Cinema, “One More Chance” the movie is spoken of with reverence. When it came to romance, it was what a lot of movies aimed to be. It was a watershed movie. Everything that came after was influenced by it.

Suddenly, it became OK to like Filipino movies. Quoting Pinoy movie lines, which was what your yayas used to do, was suddenly part of your banter. It was OK to admit you cried seeing John Lloyd and Bea on screen. It was OK to watch it more than once in the theater. Not to be too hyperbolic, but it changed the landscape of romantic movies in the Philippines.

A lot of people would point to the “power lines” that preceded what we know as “hugot” today. For me, it wasn’t that as much as the honesty with which those words were said. A lot of what “hugot” is nowadays is a punchline, a Tumblr image or a meme.

Back in 2007, it was raw. It was real. They were words never heard before, and which had no place in what looked like a light romantic movie. When Popoy says, “…and you chose to break my heart,” it carried more weight than scrolling through the same quote on Instagram.

Some would also point to the performances. There are only a handful of memorable Filipino movie characters that have entered pop-culture consciousness. In our generation, it’s hands down, Popoy and Basha. Never have two names been so synonymous with heartbreak. They have come to embody everyone who has loved and lost.

Take Popoy, for example. He broke through the mold of the macho leading man and told them it’s OK to wear one’s heart on one’s sleeve. Even men ugly-cry from time to time.

The plot itself is not groundbreaking. It still fit into the mold that people criticize Star Cinema for when it doesn’t work and praise it for when it does. Chastise the Star Cinema machine all you want, but there’s a certain refinement that the story gets once it’s gone through the wringer. The template seldom changes, but it’s the moving parts that get refined. And when it works, it’s magnificent, film snobbery aside.

Some movies stay a bit longer  in the process than necessary and get overcooked, while others are underdone. And yet some are done just right, such as “One More Chance.”

And then the question came again: Do you really want this to be your first novel?

First of all, how do I translate this beloved film when all the moving parts are gone? When left with just words, how could I write “She loved me at my worst” or “Ako na lang uli” again? And most importantly, will it be enough? The original screenplay had the heart, soul and skeleton of the story. My job wasn’t just a matter of picking the skin to put over it.

I finished the novel in just a couple of weeks shy of half a year, a really short time to finish a book. At the end of the day, with all the moving parts gone, I began to focus on the characters and their relationships, and I realized that the story, as simple as it is, is a great one, rich in nuance and full of character.

There were the friends, some of whom can fill a whole novel’s worth of material themselves. And since movies show us only a window of the characters’ lives, the novel allowed me to extend further into the past, enrich the present and look beyond to the future.

Some stories lay it all out, flat and finite, for all to see and conclude the same thing. But some stories, like “One More Chance,” lay their heart out yet challenge you to explore their soul and see how far it goes. Stripped of everything, and down to its core, this simple story is a great one. And having that as my first novel isn’t too bad, after all.

The author is based in Hong Kong, where he works as a copywriter. “One More Chance” is now available in leading bookstores and major newsstands nationwide.