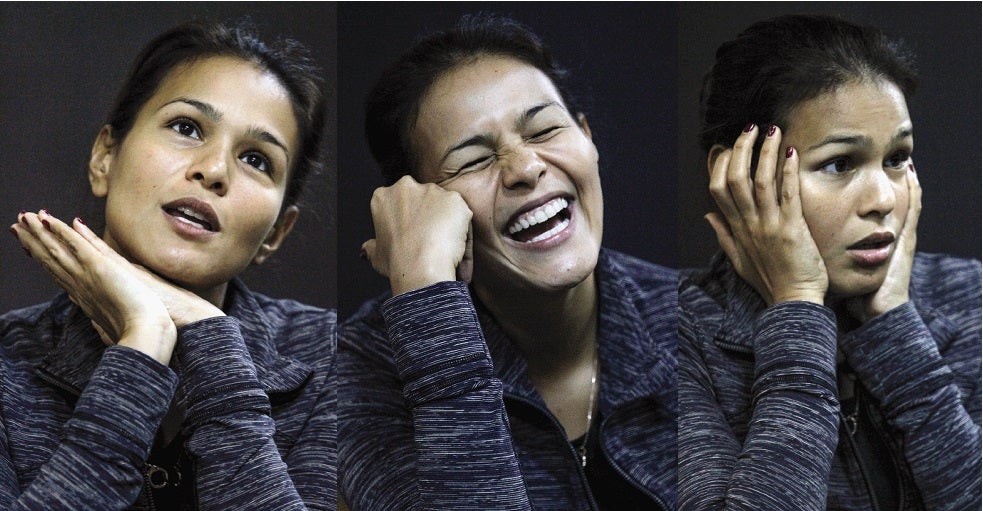 MOODS OF IZA. “Sabel” has been a magical experience. PHOTOS BY ALANAH TORRALBA

Like a blurry TV image coming into sharp focus, Iza Calzado surprises in person. Taller than one would expect, she has an impossibly small face with striking features—aquiline nose, bladed cheekbones and smart, sharp eyes.

Emotions race across her face like waves. She punctuates her sentences with emphatic gestures. Even conversation is like performance to her, and she’s fully invested in it.

It’s all part of the package that makes Calzado a unique talent.

She has been in the news lately because of her performance in the musical “Sabel, Love and Passion” last April 30 at The Theatre at Solaire. Calzado earned rave reviews as the narrator of a musical inspired by Sabel, the iconic woman in the paintings of National Artist for Visual Arts Benedicto “BenCab” Cabrera.

Calzado essentially transforms into the painting. After a second performance last June 26, she will take her final bow as Sabel tonight, June 27, at the Music Museum.

“Sabel” also happens to be Calzado’s theater debut, yet she is considered the best of the many good things in the play. That she is garnering the best reviews of her life in an art form that is basically new to her speaks volumes about the unusual journey Calzado has taken to get here.

The daughter of the late choreographer and director Lito Calzado and late wife Mary Ann, the 32-year-old Calzado spent her childhood literally just beyond the edges of the TV screen, watching her father work from the sidelines when she was 7. She did some guest appearances here and there, but did not pursue it after one year of trying to become a child star.

“It was for my mother mostly, but I’m sure my dad enjoyed seeing me in his world,” she says. But she had trouble when faced with failed auditions. “I didn’t handle rejection well,” she admits.

Though she harbored dreams of becoming an actress herself, she gained a lot of weight and suffered from body issues that would linger until she started slimming down as a teenager —losing almost 100 pounds—through dedicated lifestyle and dietary change.

“But I really wanted it,” she says.

She plunged headfirst into show business after three years in college.

“I learned by doing through the years, but the biggest thing I had to overcome were my issues with myself, my weight issues,” she says. “It would always boil down to that. I lost a lot of roles because I wasn’t physically perfect for the role, but it served as motivation for me to be better than myself.”

She noted that her directors took a chance on her because she had something different in her eyes.

Calzado has demonstrated a similarly remarkable skill for reinvention throughout her showbiz stint. From voice talent to commercial model to main host, from villain to leading lady, from television to movies, from one network to another, she thrived on shows like GMA 7’s “Encantadia” and ABS-CBN’s “Hawak Kamay” and films like 2004’s “Milan.”

Along the way she has shown her dancing skills; earlier this year she released a fitness DVD titled “Level Up! Make That Change Now!”

Her transformation into a health advocate and fitness model, along with hosting the reality show “The Biggest Loser Pinoy Edition: Doubles” in 2014, brought her own battle against body issues full circle.

“I just thought I could be a person of authority for the contestants on the person they can be,” she says, “because it’s not easy being an ex-obese person in this industry. It’s a constant battle.”

A confluence of events led her to “Sabel.” Written and directed by Freddie Santos with music by Louie Ocampo, “Sabel” tells the story behind the homeless woman who inspired BenCab’s paintings through a combination of Calzado’s storytelling, movement by the Philippine Ballet Theater and songs from the likes of Audie Gemora and Aicelle Santos.

It’s part of the BenCab 50th year retrospective, and Sabel goes through a crucible of history, affection, revolution and madness throughout the course of the play.

Freddie Santos has said that Calzado was the only choice for the part, and Calzado said they had been in talks for about three years prior to the play’s actual staging. She loved the idea and said yes immediately.

She knew of BenCab’s paintings, of course. “I’d always wanted to be painted by BenCab,” she says. “It was an exciting idea, but is it going to happen?”

Santos has been quoted as saying that Calzado was perfect for the part because there was just something “loony” about her.

“We all have to have that spark of insanity within us to be brilliant,” Calzado quips. “That’s what makes us stand apart from others.”

It didn’t mean she wasn’t intimidated by the voluminous lines she would be required to memorize; she thought it was going to be a straight play and admittedly struggled at the start.

“But I felt if I learned my lines and knew where Sabel was coming from, it would magically happen. Maybe it’s time for me to do it,” she recounts.

Once she’d signed on, Calzado took full advantage of the time to prepare.

“I don’t like doing things when I’m rushed,” she points out, noting that so many things in show biz are done on the fly. She made it a priority and has taken every chance to prepare, regularly repeating lines on the treadmill, taking the time to practice with the dancers.

To become the very heart of “Sabel,” she says she approached it this way: “The only way I know how is to put my heart into it. There is no other way. I am not technically trained. There are words. There is a story. I am talking as Sabel and this is my story. I just imagined what it would have been like. With every part of it, I would just picture myself going through it.”

She constantly reminds herself whose work she is channeling: “This is BenCab’s Sabel! A national artist’s muse! His masterpiece!”

It should come as no surprise that Calzado is ecstatic about posing as Sabel for BenCab in the run-up to the play’s opening, as the art would be used for the poster. She received one sketch, and Leon Gallery auctioned off the other sketch for over a million pesos.

When she got tapped to do “Sabel,” she jokingly said she wanted to get a BenCab painting without ever thinking it would actually happen. You have to pose for it, she was told.

“Oh, hell yeah,” she answered. “I was so prepared that day. Turn me into Sabel.”

It’s no surprise that Calzado is getting swooning reviews. Even in rehearsal, she seems to flip a switch, and projects her presence as soon as the scene starts. She is quick with questions for Santos and effortlessly recites her poetic lines, and she moves with emphasis and gusto.

Even here, in the bowels of the Meralco Theater, sans makeup and costume, Calzado stuns.

“I’m so humbled because I just try to do my best,” she says. “What happened on stage was just magical. To have good reviews is just icing on the cake.”