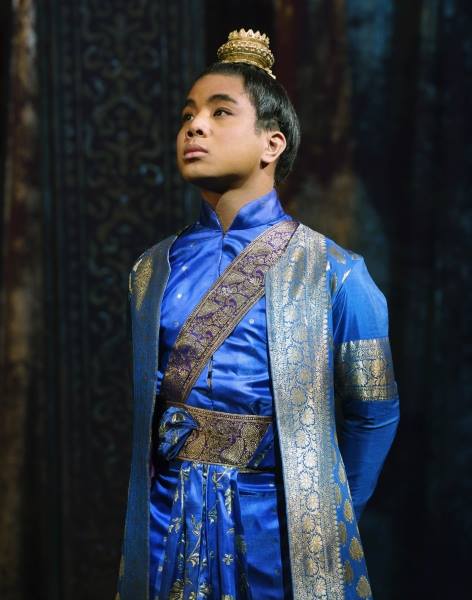 The New York Times praised Jon Viktor Corpuz as “excellent” in his role in “The King and I” on Broadway, the 2015 Tony Award winner for Best Revival-Musical.

Corpuz “makes a strong impression” (Huffington Post), playing the role “with the aloofness that befits his father’s son but also with a questioning intelligence that makes him his own man” (The Hollywood Reporter).

Heavy is the crown: On top of eight shows a week, having just performed in a medley from the musical for the Tony Awards (broadcast to millions of viewers), preparing for his first semester at New York University where he’s received a full scholarship to the Clive Davis Institute for Recorded Music, Corpuz has just wrapped a one-night-only solo cabaret show “Confessions of a Teenage Drama King” at 54 Below (the restaurant literally below Studio 54).

The real Prince Chulalongkorn was 15 when his father passed away; most productions cast actors 12-13 years old.

“During the auditions, they went back and forth between younger pre-teen and older teenager [auditionees and characterizations], so I wasn’t quite sure where I stood,” says Corpuz.

Well, he knows now. At 18 years old, he enjoys the chance to have a more nuanced take at the character.

In a previous interview with a blog, he said, “I don’t think this role has ever been interpreted in this way. Chulalongkorn was very influential and really a revolutionary in real-life Siam.

“In this production, we’re seeing him at the cusp of adulthood and on the verge of kingship, on top of having his world turned upside down by Western cultures and philosophies and coming into his own as a person and developing his own morals.

“Our director, Bartlett Sher, has been so helpful … and has really helped me unearth and humanize this person.”

Corpuz was born in Florida to Jay, a businessman, and Virginia, an accountant and auditor, from Laguna and Manila, respectively, who both moved to the US in 1985. Corpuz and his two older sisters grew up in a “typical Filipino” household filled with “music and a karaoke.”

“Filipino singers whom I admire include Lea Salonga and Charice Pempengco and part-Filipinos Jessica Sanchez and Bruno Mars.

“There is an insane amount of good singers in the Philippines. The last time I went, it seems like everywhere, whether it be a drag queen club, hotel or random karaoke place, there are good singers.”

(Conrad Ricamora, whose father is Filipino, plays Lun Tha alongside Corpuz. Ricamora played the role of Ninoy Aquino in the musical “Here Lies Love” and plays Oliver in “How to Get Away With Murder.”)

He also loves going to Filipino restaurants in Queens like Ihawan and Krystal’s.

Corpuz has come far from his first summer workshop at Patel Conservatory performing arts school, crying at eight years old because he was afraid he wouldn’t get the role of a snake.

He ended up being cast as the lead in a community musical production. “That’s when I was bitten by the acting bug,” he says.

He’d played Chulalongkorn in a local production in Florida when he was 10 and landed the same role in another staging in New York when he was 15, where his family eventually moved.

He transferred to the Professional Performing Arts School (Britney Spears and Alicia Keys are alumnae), where he’ll graduate from later this month.

Credits include being cast in a one-night-only presentation of “Godspell on Broadway Cast of 2032,” where young actors performed roles from the musical; and cast in Julie Taymor’s (director of Disney’s “Lion King” musical) off-Broadway production of “A Midsummer Night’s Dream.”

“We acted as water or trees, anything that added to the ambiance,” he recalls.

Corpuz auditioned for “The King and I” last summer, returning for five callbacks. “There was a very relaxed energy in the auditions. It felt like a rehearsal where we were just digging into the material.”

His secret to feeling calm? “I make it a point not to know the creative team and their credentials so I don’t get intimidated. When I later found out who the guy giving me directions was, I thought, ‘Oh. Director. Tony-Award winner. Cool. Got it,’” he says, laughing.

What was nerve-wracking for him was “the final callbacks in front of the Rodgers and Hammerstein estate, all the casting people, the creative team and the producers.”

“But it was the time between auditions and waiting for the results that was the most tiring.” He’d actually missed the voice mail from his manager about being cast, only retrieving it three days after the call.

“I was really happy! I feel lucky that this production came at this time in my life. It feels right.”