How theater is helping ‘Yolanda’ survivors cope and move on | Lifestyle.INQ ❮ ❯ 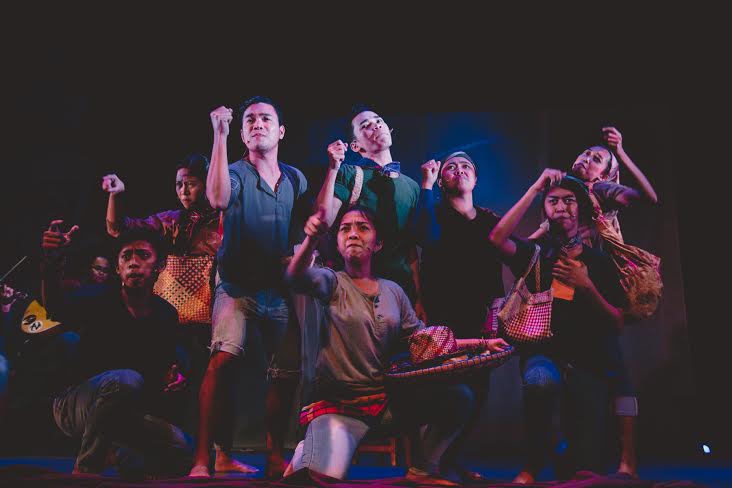 How theater is helping ‘Yolanda’ survivors cope and move on

Moving on from a devastating experience such as the onslaught of Supertyphoon “Yolanda” isn’t easy for the survivors of Palo, Leyte province. But through theater, the survivors have come to realize that even in the darkest moment of their lives, humor can still thrive.

And such humor was showcased in the original play of the Palo Culture and the Arts Organization (PCAO), which was one of the featured works in the three-day Children’s Festival of the Philippine Educational Theater Association (Peta) held recently.

Titled “Tuloy Pa Rin,” the play depicted the experiences of various survivors when Yolanda made landfall in the Eastern Visayan province on Nov. 8, 2013. But instead of just reliving the memories, the play looked at the ridiculous side of these real-life stories.

Among these stories was that of a group of men who stayed at home drinking tuba, the province’s traditional wine, despite evacuation orders from the local government. When floodwaters came rushing in, one of the men made every effort not just to save himself but also a gallon of tuba submerged in water.

Another was a story of a survivor who, at a time when resources were scarce, was cut in line during a relief effort because she was too mesmerized by the boy-next-door looks of a volunteer from an international nongovernment organization.

According to PCAO head Carlos Romano, the decision to highlight the comedic parts of an otherwise devastating experience was based on the observation that it would be a lot harder for the people of Palo to recover if they were to relive their hardships during the calamity.

“How will we move on from the disaster if what we’ll present is a reenactment of what happened? That will be difficult for us. The pain and trauma will keep coming back,” Romano said.

Established in 2012 by the local government with the help of Peta, PCAO stages community presentations that tackle a host of issues—from the state of the environment to local culture, tourism and children’s rights. Romano said theater and the arts are “effective tools to educate the people on various issues.”

“The difference is that in a lecture-type of discussion, within 10 minutes your audience is already dozing off. There is a more holistic approach when it comes to theater and the arts, because the audience is entertained while at the same time they are educated on various issues. More importantly, the message you want to impart to them hits them right at the heart,” he said.

In putting together the stories they gathered from the survivors and producing “Tuloy Pa Rin,” Romano said they were very cautious because they didn’t want the 10-member cast and the audience to relive the traumatic experience. In fact, he said, their first rehearsal in September last year was interrupted several times because cast members would suddenly break down in tears.

Asked how they were able to get through with it, Romano described the process as “magic.” He added that it also helped that the support system was strong within the cast, who, despite losing much of their possessions, still had their families intact.

When they first showcased the play in San Jose, Tacloban, a month later, Romano said they were glad that hundreds of survivors were able to see through their bad experience, with the play serving as an “eye-opener” that the survivors need not sulk about their predicament.

San Jose is considered the worst-hit area in Tacloban, with more than a thousand dead from Yolanda’s storm surge.

At present, PCAO is going around several communities in Leyte showcasing the play. Romano said they saw the need to let more survivors see the play because through it they can “laugh off the horrible experience.”

“Tuloy Pa Rin” also provides its audience the “motivation to move on.” If not for theater and “Tuloy Pa Rin,” coping, especially among the younger members of PCAO, will be a lot harder, said Romano.

“The trauma would still be there. What we’re doing is one way of lessening the trauma, as well as providing a coping mechanism. ‘Tuloy Pa Rin,’ especially for the cast, made us see that there is still a chance for a better life in Palo, in Leyte.”

They hope to bring the message that “whatever the tragedy may be, there’s always a bright side to it. All you need to do is to hold on, fight and move on, which is the core message of ‘Tuloy Pa Rin.’”

“Walang forever,” he said of problems, borrowing a line often used in the 20-minute play.