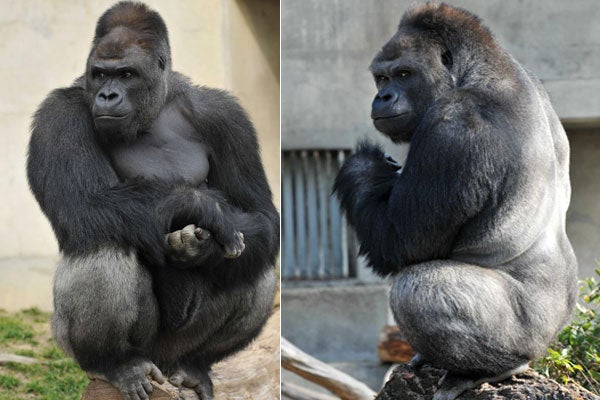 This handout picture released from the Higashiyama Zoo and Botanical Gardens on June 26, 2015 shows giant male gorilla Shabani, weighing around 180kg at the Higashiyama Zoo in Nagoya in Aichi prefecture, central Japan. The 18-year-old silverback with brooding good looks and rippling muscles is causing a stir at the Japanese zoo, with women flocking to check out the hunky pin-up. AFP

TOKYO—A giant gorilla with brooding good looks and rippling muscles is causing a stir at a Japanese zoo, with women flocking to check out the hunky pinup.

Shabani, an 18-year-old silverback who tips the scales at 180 kilograms (400 lbs), has become the star attraction at Higashiyama Zoo and Botanical Gardens in Nagoya, striking smoldering poses the movie model in “Zoolander” would be proud of.

“He often rests his chin on his hands and looks intently at you,” zoo spokesperson Takayuki Ishikawa told Agence France-Presse on Friday.

“He is more buff than most gorillas and he’s at his peak physically. We’ve seen a rise in the number of female visitors—women say he’s very good-looking.”

Shabani, who has been at the zoo since 2007, shot to fame after being made the campaign model for the zoo’s spring festival earlier this year, Ishikawa said.

The ape’s paternal skills are also a big hit with women, he added.

“He’s a father and he always protects and looks over his children,” Ishikawa said. “Zoo-goers think his kindness is attractive too.”

Women have taken to social media to swoon about Shabani’s rugged looks, describing him as “ikemen”—or a hunk—and likening him to a male model.

A recent flurry of tweets has made Shabani a national celebrity, with Japan’s broadcasters NHK and NTV featuring the gorilla on popular shows.

“He will look you in the eye and sometimes if you’re taking photos it will look like he’s posing for you like a model,” said Ishikawa.

“But he’s the head of a group of five gorillas so it’s likely he’s just watching out for them and keeping an eye on you.”