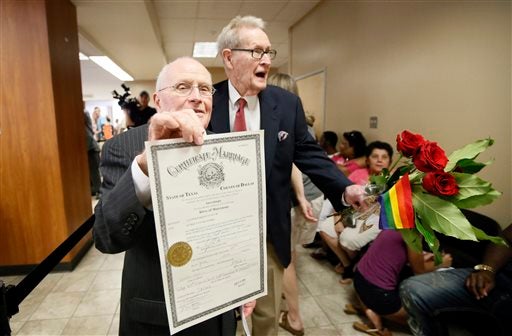 George Harris, left, 82, walks out of the Dallas County Clerks office showing his marriage license as his husband Jack Evans, holding roses, 85, follows behind Friday, June 26, 2015, in Dallas. Harris and Evans were the first same sex couple to be married in Dallas after receiving their license. Gay and lesbian Americans have the same right to marry as any other couples, the Supreme Court declared Friday in a historic ruling deciding one of the nation's most contentious and emotional legal questions. Celebrations and joyful weddings quickly followed in states where they had been forbidden. AP

In photos: Gay couples rejoice after US Supreme Court ruling

Same-sex couples won the right to marry nationwide Friday as a divided U.S. Supreme Court handed a victory to the gay rights movement, setting off a jubilant cascade of weddings in states where they had been forbidden. The ruling, which will put an end to same-sex marriage bans in 14 states, was criticized by some religious organizations.

Here is a selection of AP photos that capture the historic day: