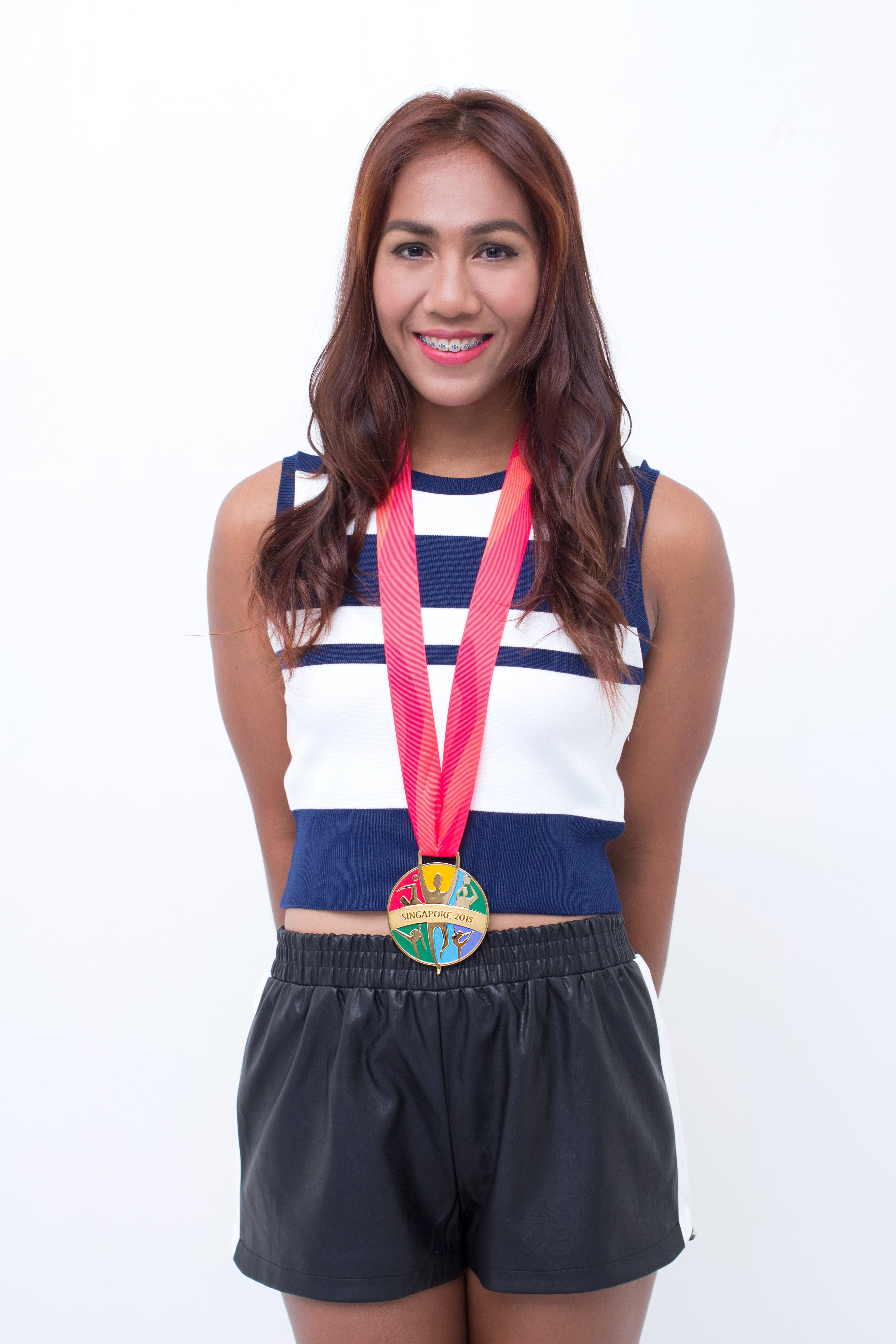 As the clock struck on the eighth second, the Philippines rejoiced as triathlete Claire Adorna won the country’s first gold medal in the Southeast Asian (SEA) Games.

She started swimming at age four, trained by her father who used only swimming books and YouTube videos.

At seven, Claire showed prowess in the sport and was soon asked to join the University of the Philippines Integrated School. However, she failed to show up on the day of the interview because she was competing in Palarong Pambansa.

Claire entered the University of the Philippines (UP) Diliman to join the swimming team, and finished strong in her last two playing years with back-to-back MVP awards.

Because she competes abroad at least four times a year, she lags a little in her course program, Bachelor of Sports Science.

“Sometimes I can’t finish 24 units in a semester, only the minimum, which is 15 units. But I’m planning to finish my studies this August,” she says.

During her stint in the University Athletic Association of the Philippines (UAAP), Claire was a consistent medalist and even holds the fastest times in five individual swimming events.

Claire candidly explains the sports politics she has to deal with. There are two main governing organizations in swimming—the Philippine Aquatic Sports Association (PASA) and the Philippine Swimming League (PSL), the latter of which she is part of.

She says that to compete in big events like the SEA Games or the Asian Games, one has to join PASA.
“Even if you’re the fastest swimmer but not a member of the PASA, you won’t be able to compete in the big games,” Claire says.

“I compete in small games but there’s no problem there because I still learn a lot and I’m thankful to PSL for giving me a lot of exposure,” she adds.

When Claire returned from the World University Games in Russia, news broke that she would not be able to compete in the UAAP.

“I was shocked and cried a lot because, at that time, it was already my last playing year,” Claire recalls.

Thanks to Sen. Pia Cayetano, who helped Claire with her case, she was able to compete. On her last playing year, she reigned as MVP, proving to critics that she’s among the toughest in her field.

Still, her hopes to compete as a swimmer in SEA Games remained a dream. “When I was a swimmer, frustration ko makalaro sa SEA Games,” she says.

A triathlete is born

In 2012, Claire would bike from her home in Marikina to UP. A year later, she was told to join a triathlon.

When she won the race, it bolstered her confidence in the sport. She became part of the Yellow Cab triathlon team in 2013 and later shifted to Unilab Active Health team a year prior to the SEA Games.

In January 2014, Claire made it to the national triathlon team, an achievement that put her one step closer to her ultimate dream.

Her critics, who expressed doubt when she signed up for her first international triathlon, were astounded when she claimed the bronze in an Asian Cup held in Taipei.

“Coach Ani de Leon-Brown told me to prove them wrong and I think I did,” Claire says.

On the same year, she also competed in the Asian Games where she placed seventh and broke the Philippine national record.

Three months before her race in the SEA Games, Claire, with some teammates, flew to Australia to prepare.
She felt unbearable pain in her ankle during her training runs. Her doctor told her it was a past injury but which, as a swimmer, she didn’t feel because the body experiences less impact in the water.

“I wasn’t that fast in biking but my weakest among the three sports is running. My injury ended with a tendon tear,” she says.

The pain in her ankle was so excruciating, she nearly gave up and almost fainted. But in the last 800 meters, her spirits were lifted when she remembered something her father told her.
“In any game, my father always said, ‘If panalo ka, panalo ka. If talo ka, talo ka talaga.’ Nabuhayan ako,” she says.

Two hours, 13 minutes and 8 seconds later, Claire was not only a winner, but a champion and hero to many athletes dreaming of bringing honor to the country.