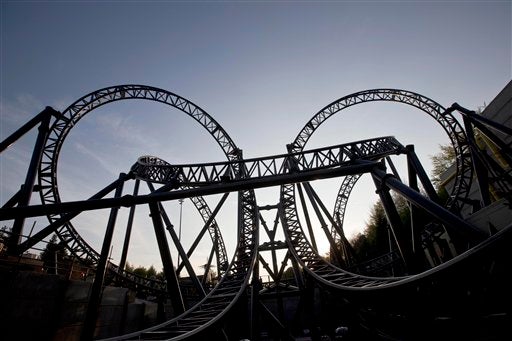 FILE - In this May 9, 2013 file photo, the tracks of the Smiler ride at Alton Towers Resort, Alton, England. The owners of Britains Alton Towers said Wednesday, June 3, 2015 that they dont know when the amusement park will reopen after a crash between two roller coaster cars left four people seriously injured. (Fabio De Paola/PA Wire via AP, File) UNITED KINGDOM OUT, EDITORIAL USE ONLY, NO SALES, NO ARCHIVE

MASON, Ohio— A 73-year-old man has taken his 12,000th ride on his favorite roller coaster at King’s Island amusement park in Ohio.

The park says Gary Coleman of Monfort Heights took the milestone ride in the front row of the Diamondback roller coaster on Monday.

The retired minister has made 493 trips to the theme park outside of Cincinnati since 2009, when the 230-foot (70-meter) steel roller coaster opened. It’s the tallest and fastest roller coaster at Kings Island and reaches speeds of 80 mph (130 kph).

Coleman says he’s loved coasters since childhood. He says he plans to continue increasing his ride count as long as he remains healthy enough to do so.