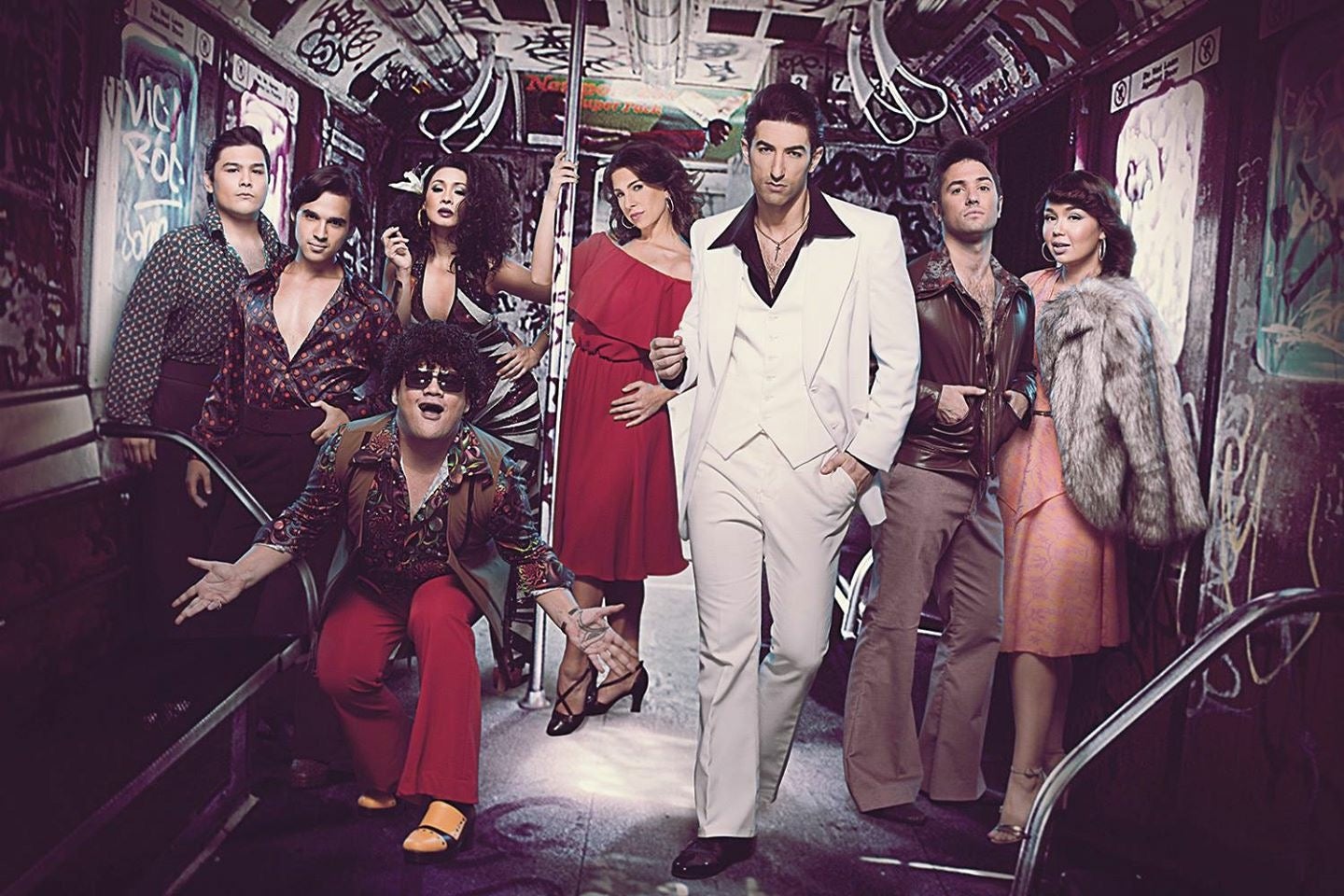 Brandon Rubendall (third from right) as Tony Manero and Jenna Rubaii (fourth from right) as Stephanie Mangano lead the cast members of “Saturday Night Fever” at The Theatre in Solaire Resort and Casino. CONTRIBUTED IMAGE

Lito Cipriano, Chinie Concepcion, and Japs Treopaldo are part of the ensemble.

Also previously announced, this Asian Tour of ‘Saturday Night Fever’—its first in eight years—which features a revamped script that’s close to the gritty spirit of the the ’70s landmark film and some of the greatest hits of The Bee Gees such as “Stayin’ Alive,” “Night Fever,” “Jive Talkin’,” “You Should Be Dancing,” and “How Deep is Your Love,” kicks off at The Theatre at Solaire Resort and Casino (Aseana Avenue, Paranaque, Manila) from July 3 to 26.

Based on the wildly popular film of the same name, which starred Oscar nominated actor John Travolta, ‘Saturday Night Fever’ depicts the uncompromisingly sordid 1970’s New York that not only made a dance revolution at that time, but also spoke straight to a generation of lost, struggling young adults.

It tells the story of Italian-American Tony Manero (Rubendall) and his gang in Bay Ridge, Brooklyn who are stuck in dead-end jobs but rule the dance floor at the local discotheque 2001 Odyssey. Tony is a tough cookie; he dreams of becoming the disco king and escaping the mean streets of Brooklyn.

‘Saturday Night Fever’ opened in the West End at the London Palladium in 1998 and on Broadway at the Minskoff Theatre in 1999. It has been seen by more than 10 million people with over 2,800 shows in more than 20 countries across the globe, thrilling theatergoers and music buffs alike till this very day.

Brandon Rubendall has appeared on Broadway in “Spider-man: Turn Off the Dark” and the 2011 revival of the Tony Award-winning musical “Anything Goes.” Rubendall has also toured in the productions of “Wicked,” playing the romantic lead role of Fiyero; “Hairspray,” playing the roles of Fender and the lead hunk, Link Larkin; and “The Last 5 Years,” playing the role of up-and-coming novelist Jamie Wellerstein. He currently plays in the band Apollo Link, and occasionally dances for music icons Madonna, Beyonce, and Jennifer Lopez.

Jenna Rubaii has appeared in the National (U.S.) and International Tour of Green Day’s hit musical “American Idiot,” playing the role of The Extraordinary Girl. For 12 years—starting at six years old—she joined the all-girls song and dance group Entertainment Revue, which traveled across the U.S. to perform in various corporate and sporting events, retirement communities, fundraisers, and political rallies. She’s an excellent impersonator of famous pop singer Britney Spears.

Mikkie Bradshaw played the title role in the first international staging of “Carrie The Musical.” She also appeared in the Manila productions of “The Sound of Music,” “Rock of Ages,” “Nine,” Disney’s “Aladdin,” and “The Addams Family.”

Bibo Reyes made his professional theater debut playing the role of Sonny in the Asian premiere of Tony Award-winning Best Musical “In the Heights.” He also appeared in the Manila production of “Rock of Ages” and the Singapore production of “Avenue Q.”

Nick Varricchio flew all the way from New York City and is così eccitato to be performing with this awesome cast! His theater credits include “A Chorus Line” (Al) and “The Light in the Piazza” (Giuseppe). He also appeared in Paramount’s 2011 Nickelodeon film ”Fun Size” (Jonathon) or as AXE Body Spray’s “The Attendant.”

Jamie Wilson began his professional theater career at the tender age of seven years old, playing Theo in Repertory Philippines’ production of “Pippin.” Since then he has made the stage his home, appearing in numerous musicals and straight plays and tackling a wide range of characters in his 35 years as an actor. Theater credits include “Camelot” (Tom of Warwick), “A Midsummer Night’s Dream” (Nick Bottom), “Speed-The-Plow” (Bobby Gould), “Angels in America” (Belize/Mr. Lies), “Cabaret” (Emcee), and “Into The Woods” (The Wolf, Cinderella’s Prince).

Rafa Siguion-Reyna, an alumnus of New York University, moved back to the Philippines in the summer of 2013 to pursue an acting career. A finalist in TV5’s “Celebrity Dance Battle,” his acting credits include Kenickie in 9 Works Theatrical’s production of “Grease”; Mercedes the Magnificent in 9 Works Theatrical’s “La Cage aux Folles“; Ric in GMA Network’s Primetime show “Niño”; Baldo in GMA Network’s “Yagit”; Ferdie in the independent film “Toto”; and Ricky in the film “Hari ng Tondo,” an official selection to the 2014 Toronto International Film Festival.

Altair Alonso starred in “The Little Mermaid” as Prince Christian, which toured in a cruise ship across Asia in 2010 and covered as Tommy Basilio in “Rivalry: The 2nd Round.” Currently with Atlantis, Altair has performed in “In the Heights,” Disney’s “The Little Mermaid,” Disney’s “Aladdin,” “The Full Monty,” “Piaf,” “The Addams Family,” “Rock of Ages,” and “Shrek The Musical.”

Mary Rose, born and raised in New York City, received her BFA in dance from Rutgers University. She was a semi-finalist on the Latino singing competition “Tengo Talento, Mucho Talento” and can also be seen in commercials for GAP and Direct TV. Marie was recently part of the workshop for the Netflix series “The Get Down.”

Daniel Cabrera has been part of musical theater productions such as “The Lion, the Witch, and the Wardrobe,” “Pinocchio,” “Jack and the Beanstalk,” “Cinderella,” Disney’s “High School Musical Onstage,” and “Footloose.”

Steven Conde started acting with Chancel Repertory Theatre in 1999. Some of his theater credits include Trumpets’ “The Little Mermaid” and “The Bluebird of Happiness” and Atlantis Productions’ Disney’s “Aladdin,” “The Full Monty,” “Ghost The Musical,” and “Shrek The Musical.”

Alex Godinez took the stage as Sharpay Evans in the Manila production of Disney’s “High School Musical Onstage” in 2007. Shortly thereafter, she moved to Los Angeles to study music and dance at Musician’s Institute in Hollywood and trained different acting methods under world-renowned mentors Howard Fine and Anthony Meindl.

Emeline Celis-Guinid is a proud full-time mother. Her theater credits include “Grease,” “Once On This Island,” “Rama at Sita,” “Wanders,” and “Rock of Ages.”

Yanah Laurel is a two-time Aliw Award nominee for Best Actress in a Musical. Theater credits include “Spring Awakening,” “Legally Blonde,” Disney’s “The Little Mermaid,” “Nine,” “Carrie,” and “Shrek.” She was also part of Resorts World Manila and Star Cruises Gemini’s “Broadway At Sea,” which toured Singapore and Malaysia.

Japs Treopaldo is a proud Thomasian where she got her first training in dance and theater from UST Salinggawi Dance Troupe and Teatro Tomasino. Theater credits include “Legally Blonde,” “In The Heights,” Disney’s “The Little Mermaid,” “Rock of Ages,” “Nine,” Disney’s “Aladdin,” and “Priscilla, Queen of the Desert.”

Chinie Concepcion completed BA in Musical Theatre from Singapore’s Lasalle College of the Arts, with First Class Honours, last year. While in Singapore, she was tapped to act in Media Corp.’s “Crime Watch” and in several corporate videos and events. She has performed with Repertory Philippines (“Sleeping Beauty,” “Oliver!,” “Once Upon A Mattress”), 9Works Theatricals (“Sweet Charity,” “The Wedding Singer”), and Trumpets (“The Little Mermaid,” “Joseph the Dreamer,” “The Lion, The Witch and The Wardrobe”), among others.

Michael Carandang, who dances with The Hotlegs and Dancemasters, was trained as a dancer way back when The Metropolitan Theater in Manila was still open. He was also part of the opening team in Hong Kong Disneyland, where he played chorus dancer for “The Festival of the Lion King.”

Cecile Martinez is definitely thrilled with SATURDAY NIGHT FEVER, where she dons three different hats: Assistant Choreographer, Dance Captain, and Female Swing. The challenge is extensive as she is involved both in the creation and execution of the show featuring a powerhouse cast of local and foreign actors. She has choreographed for Atlantis’ “Hairspray,” “Legally Blonde,” “Xanadu” Disney’s “Tarzan,” “Rock of Ages,” “The Addams Family,” Disney’s “Aladdin,” “Ghost The Musical,” “Carrie The Musical,” “In The Heights,” Disney’s “Aida,” “Shrek,” Disney’s “The Little Mermaid,” “Nine,” and “The Full Monty.”

‘Saturday Night Fever The Musical’ is presented by PLDT and Citibank in cooperation with the Philippine Daily Inquirer, among other sponsors.