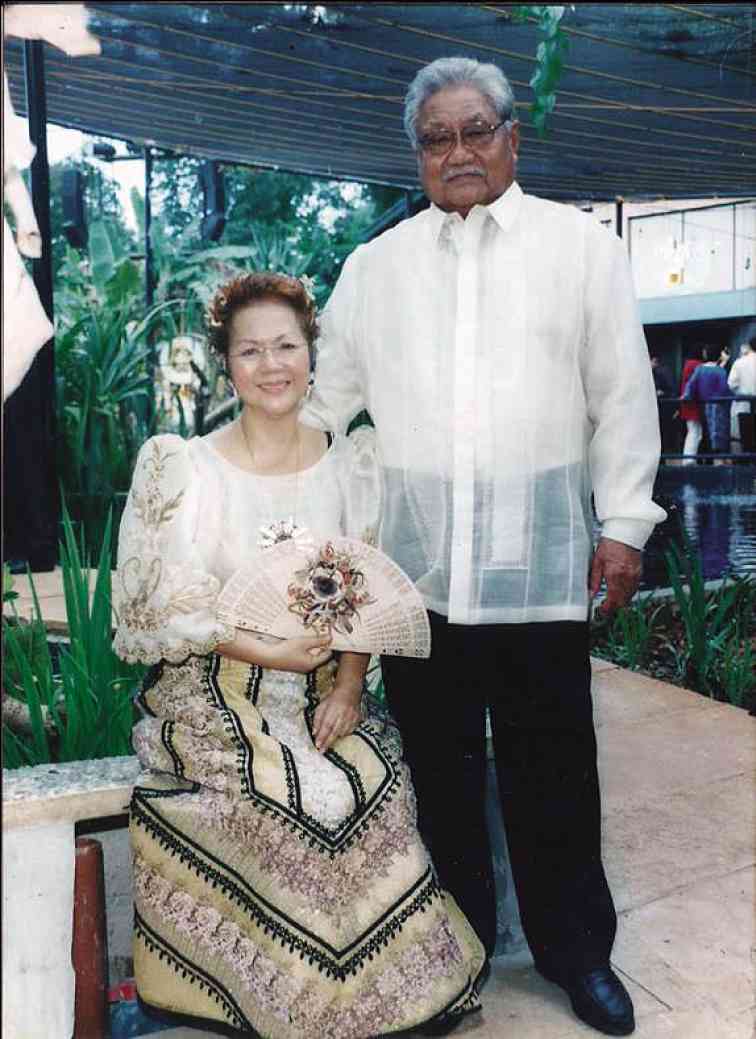 Room to grow or compress

Forever 81 has turned 85 and a friend was kidding me, why don’t you change your column’s name to something newer like H& M or Uniqlo?

Well, for one thing I’m no longer new. I’m old hat. Old people have more past than future, that’s why we’re always reverting to the past. Let me bore you with my 50th wedding anniversary in 2002.

It was probably one of the happiest days in Marcelo’s and my life, but the ceremony was different from what it traditionally means. It was not a renewal of vows, it was a renunciation of them: “From this day forward there will be no more promises to keep, no more vows to break, no more expectations.”

I asked my husband what he liked most about our long life together. And he said, that we learned not to get in each other’s way. More poetically put: Giving each other lots of room to grow. But did it have to be a whole square mile? We were solidly bonded in common interest areas (the children and their families, and eating in gourmet places). Other than that it was to each his own.

And it was all the time what I thought had been the flaw in our unbliss! People always asking me at a party/wedding/reunion/wake, “Why are you alone? Where is your husband?”

One time a friend who had been going to our house for two years without ever encountering my mate in the corridors (he avoided people whom only I knew) related that she was in the building where my husband used to work. Suddenly the loudspeaker blared, “Car of Attorney Fernando.” My friend said she watched for our car to pick him up from the entrance. Later she phoned me excitedly, “I saw him! I finally saw him!”

It was funny yet embarrassing. So contrary to everything that had been brainwashed in me. After all, wasn’t “togetherness” what married couples were supposed to strive for?

We were just too different. We did not enjoy the same things. He was reserved and terribly conservative. He wasn’t a square, he was a cube. I was a double helix. He had his friends, I had mine. Our peace depended on keeping our activities apart as much as possible (though not in repressing them).

Some who came to our house for meetings, I’m sure, secretly suspected that we were estranged. Like the singer who, upon learning about our golden celebration, asked tentatively, “He comes over to visit, doesn’t he?” Since she never saw my husband she assumed he was living next door! It would be funny if it weren’t so awful.

Sure, he was present in all my awardings, but only later was it because he really wanted to be. When we were younger he once confessed during a bitter quarrel, “You think I was there during that Palanca Awards dinner? I was in the bar across the street! I came back only when it was time to go home. And you never even knew.” He then declared what would henceforth be the rule of his married life: “Don’t expect me to be at any of your artist parties. Your friends are nice to me, but I don’t like feeling like an appendage. And it’s worse when you worry about me.” (But as a wife I was expected to “look proper” and attend all his executive events!)

It was the shock of my life. He was an intelligent, highly respected corporate executive, and he could not hack closer, more personal encounters with other than other executives. It took me a while to digest that, to understand the well of anguish that it sprang from.

Being two headstrong people we had boulder-size misunderstandings. Filipino husbands don’t talk things out with their partners. When they do it’s just to make temporary peace. Adjusting to each other is a matter of pakiramdaman. What about my rights, a younger wife might protest. You gotta be kidding! Women’s libbing in the Philippines is bad manners. Arguing for rights over the dinner table never won the day, for me, anyway.

A woman’s life is shaped very much by whom she marries. If you marry a prince then you have no choice but to act like a princess. I thought, if I had married so-and-so we would have been a pretty conventional, even religious couple. (Yuck, too boring!) On the other hand if I had married so-and-so—read, hippie and artist—I’d probably be working my ass off to support a family. But our lifestyle would be really colorful. (Attractive but too taxing). If I ended up with so-and-so, however, I would probably have my pick of cars in the garage. But would the stingy sonnafabitch ever fund my brilliant (?) but losing theater productions? (Disaster.)

Well, I guess that’s it. You work out whatever marriage you have, and it comes out the best and only one for you. In my case I guess the major kink I had to work out was how to hack it alone socially. How not to let having to explain or not to explain kill me. How difficult it was! Inside me I was a valley of tears.

How could I tolerate such a life! But when I entered his room one day I saw it all with new eyes. Lined up on the shelves were all shapes and sizes of tapes, batteries, scissors, paper clips, glue, stacks of coins, strings, magnets, clips, pencils, ballpens, Post-its, envelopes—name it. And a small refrigerator full of every unhealthy delight for kids to raid. And I realized why I had loved him all these years. I could rely on him—not just for supplies—but for everything! Advice on an investment (even a wrong one), a trip, a gift, the right word, the right wine, the name of a foreign dish, how to get to Rody’s house, how does my article read.

On the other hand, my job was to prop up a growly Capricorn, to show him the other side of gloom, no mean feat for a flying Gemini. He grounded me, and I felt safe with him. He was my Rock of Gibraltar. Never mind if rocks don’t fly, don’t kiss and aren’t so sociable. Providing is caring, it is love, and how often that is taken for granted.

It was a matter of getting into the other’s shoes. I had put murals and all kinds of bizarre artworks in our house. I love going out with artist friends and entertaining them at home (although I had to steer them nervously away from common areas). My house was my work and party place, and sometimes it was littered with costumes. Wasn’t it just as difficult for a man like him to adjust to that?

When we finally got comfortable with our nontogetherness, we recognized it as the happiest modus vivendi. We could at any given time eat lunch together, or at two different hours, or sleep in different rooms without any resentment. Go to the same mall and see different movies. Better still each could finally go out without having to account for anything (unless we wanted to).

How does one get complete freedom? By giving it! But maybe it’s the difference between imposing a right and earning it. You mean no house rules as in no boundaries? Isn’t that quite the opposite of what friends advise you? What if he quits a job that he dislikes? (Then he’ll follow his bliss and be a winner.) What if he finds his way back to an old sweetheart? (Well, wouldn’t you want to find out once and for all?) Maybe that’s why people don’t achieve a state of freedom until they are pretty mature and can honestly say, Why not? Enjoy your life! It’s short. Seize what’s left of the day! It’s my gift to you.

The shift in viewpoint is a fine distinction but cosmic in result. When all prohibitions are down, there is nothing to hide because there is no veto. You do not feel possessed because you do not possess. The horizon has broadened, and there are endless options. It makes life so beautiful. You love everyone but specially the one who makes it possible, and whom you love you do not hurt.

Not that I ever really achieved it, hehe.