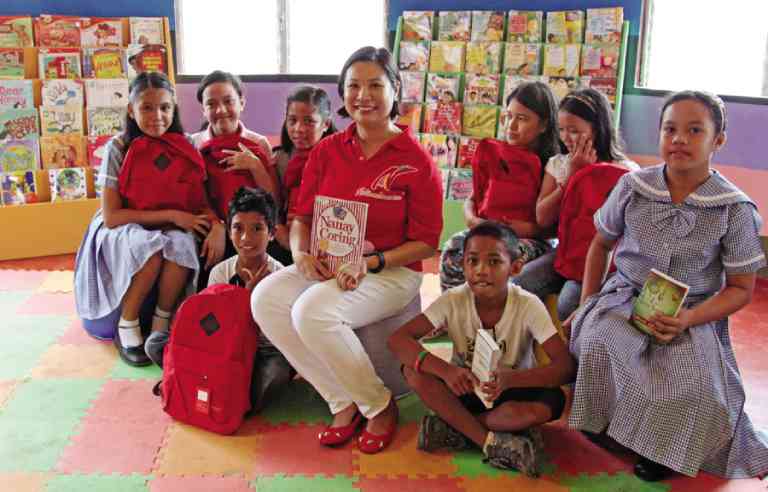 PALO, Leyte—When American best-selling author Mitch Albom visited the Philippines in February 2014 on the invitation of National Book Store, he made sure this sojourn included a trip to the province of Leyte, which had been devastated the year before by Supertyphoon “Yolanda.”

On Feb. 24 that year, Albom and his wife Janine visited Tacloban City and its environs. Albom, author of 1997’s “Tuesday’s with Morrie” and 2013’s “The First Phone Call From Heaven,” had seen the effects of natural disaster before, but what he saw in Leyte moved him when he arrived at the tiny municipality of Palo.

“I have never been more impressed with the character or the strength of a people that I’ve met around the world than I was when I visited the Tacloban region when I visited the Philippines,” Albom said in a video message. “What I saw there devastated me and yet inspired me with the love of learning that went on in the tattered areas right after the terrible Yolanda storm. It was just something to see.

“I remembered feeling that I needed to do something about it,” he added, “so I asked some people I was there with, what could we do? Where are the classrooms? Where are the libraries?”

Told that the libraries had been destroyed along with the schools, he resolved to do something.

Albom has long devoted his time to philanthropy and charity—his A Hole in the Roof Foundation being the most well-known example—so he hatched a plan. “Maybe I can call some of my friends in the States who are writers, and maybe we can get some books donated, maybe we can raise some money, and maybe we can build some libraries,” he said. “The maybes of life that turn into a reality are really what make life worth living. And this was one of those cases.”

From that moment was born the Donated Reading for Youth of the Philippines, or DRY Libraries. Albom gave $10,000 and promised to raise $160,000 more. He also rallied his author friends who donated copies of their books. The lineup of donor authors is dazzling: Amy Tan, Stephen King, John Grisham, John Green, Suzanne Collins, James Patterson, Isabel Allende, Michael Chabon, Khaled Hosseini, and JK Rowling.

Albom’s partner in this undertaking is National Book Store Foundation, Inc. (NBSFI), the retailing giant’s charity arm, which pledged to match Albom’s raised funds on a per-dollar basis. Together with Albom’s Hole in the Roof Foundation, NBSFI set out to construct a unique kind of library.

The first of 10 libraries would be built in Palo, to be used by the students of Pawing Elementary School. To ensure it would not be destroyed by future storms, radical methods were used in its construction. Because experts said a dome provided the best protection, the library would boast a unique twin-dome design, which also maximizes the space inside.

Like something out of “Doctor Who,” what’s inside the library would feel bigger than the outside. It took six months to build the first DRY Library while Albom monitored its progress from afar. The library’s domes rose over the low-slung structures around it, a fitting symbol of hope as the region rebuilds and recovers.

On June 19, the day dawned overcast but there was a buzz at Pawing Elementary School as the first DRY Library was to be opened. Students, local government officials, members of Habitat for Humanity, the Department of Education and NBSFI looked on as the ribbon was cut and the ceremonial key was turned over to Pawing principal Loreta A. Gulariza.

People understood this was something different. “The world has changed,” said Habitat for Humanity CEO Charlito Ayco. “There are now new ways of thinking,” he said as he explained how the dome design could protect the library from the power of nature. Education Undersecretary Mario A. Derequito said, “This library is open to the children. Use it and also take care of it.” Chiqui Ruth Uy, Pawing’s barangay captain, said this was “the perfect solution to the problem of not enough textbooks.”

“This day is really special to all of us,” NBSFI president Xandra Ramos-Padilla told the audience, noting that NBSFI had come in full force to celebrate the turnover of this library. “This is only one of the 10 we will build for the children affected by Yolanda… This is part of National Book Store’s efforts to help every student in the Philippines.”

And of course, Albom spoke emotionally in a prerecorded video message. “Today you have that beautiful library and that magnificent design that can withstand the storm should, heaven forbid, another one come again,” Albom said. “It’s just so terrific and the fact that it’s one of 10 we’re opening, I can’t tell you how much it warms my heart. It makes me proud to be associated with this.”

Albom had a surprise of his own for the occasion: “And in fact, my new [book] that comes out in the fall actually mentions the Philippines. I’m so in love with the Philippines so it’s actually in there and I hope to send the first copies of that new one to fill the shelves of this new library as well as the other nine.” The book Albom’s talking about is the novel “The Magic Strings of Frankie Piesto,” due for release in November.

NBSFI had another wonderful surprise. Ramos-Padilla announced that the over 700 students of Pawing Elementary School would all receive backpacks, notebooks and school supplies. Around 100 students received theirs right away from Ramos-Padilla and NBSFI staff.

Then, the students walked through the entrance of the DRY Library, chose books, sat down and began reading. With the first library open, NBSFI plans to finish building the remaining nine by 2016 in Ormoc, Eastern Samar, and Iloilo.

Albom wanted very much to be present for this opening and was certainly proud of what has been done here: “From my heart to your hearts out there in the Philippines, God bless on this special day and I hope this is the start of many more and much more reading for your wonderful children and book-loving citizens of the Philippines.” He had promised to return to the country and witness in person the opening of the 10th DRY Library next year.

A light shower fell on the distinctive domes of the first DRY Library, which would now be open for students of Pawing to discover the stories waiting on its shelves. At day’s end, the schoolchildren, happily bearing their new bags, walked off amid the steady drizzle, hopeful and utterly unafraid of a little rain.