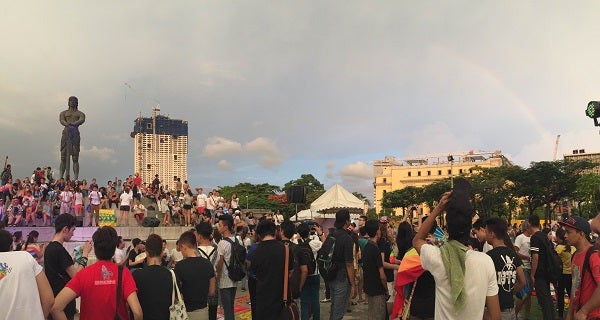 After a brief rain, a rainbow shines over a crowd of lesbian, gay, bisexual and transgender (LGBT) who congregated before the Lapu Lapu statue in Rizal Park for this year's Metro Manila Pride March. Photo by Marc Jayson Cayabyab

AFTER a brief rain, a colorful band beamed over the crowd at this year’s Metro Manila Pride March in Rizal Park.

The annual Pride March held last Saturday was adorned with rainbow banners and flags. Participants gave out condoms to passersby who witnessed the crowd from the gay community celebrating the decision of the United States Supreme Court, which in a vote of 5-4, declared that same sex marriage falls under the 14th Amendment of their Constitution.

There was a sense of hope in the Pride March. A lesbian couple with rainbow paint on their cheeks held hands in their matching white dotted polo shirts. A gay couple took shade under a rainbow-lined umbrella. Another couple in matching red polo shirts held a “Thank you US Supreme Court for Marriage Equality” placard painted with a rainbow band.

The crowd grew more jubilant when a rainbow appeared in the sky that graced the congregation before the Lapu-Lapu statue at Rizal Park later in the afternoon.

Despite the jubilation, some expressed resignation that their fight for LGBTQ (Lesbian, Gay, Bisexual, Transgender, Queer) rights would be doomed by the bigotry and conservatism in a largely Catholic country.

Tata and Cec have been together for seven months, but for them, the idea of gay marriage in the country is an issue that could go beyond their lifetimes.

“If it’s time for gay marriage, yes. But is it possible? That’s a different question,” Cec, 32, a health care worker, said while pulling close her partner Tata.

“I think it’s a battle of centuries of religious conditioning. I would like to think it would happen, but I’m dubious. I don’t think there’s any political will to do that,” added Tata, 30, who works for sales and marketing.

The Philippines is largely Catholic, with over 80 percent of the population. The church also has secular control over a relatively conservative Congress, which has shunned legislation on same sex marriage, abortion, or even divorce, the issues that the Catholic Church has frowned upon. It was a first when the Congress approved into law the administration-backed Reproductive Health bill, despite stiff opposition from the church.

“I’ve resigned sa sarili ko that it’s not going to happen in our lifetimes. If it happens, good for me. If it doesn’t, I expected it,” Cec said.

As early as now, a young couple Duncan De Guzman, 21, and Ruzcko Tobias, 20, wanted to fight for gay rights in the country. Duncan said he was doing his thesis on the topic of LGBT, and he hoped to continue the fight in the country until his last days.

But they said their hopeful spirit for their rights is dampened by the Catholic Church’s doctrine that marriage is a bond only between man and woman.

In a statement, Catholic Bishops’ Conference of the Philippines President Socrates Villegas maintained that marriage is a “indissoluble bond of man and woman” adding that the Church will study the US Supreme Court ruling “with assiduousness and revisit our concepts and presuppositions, always with an eye to being faithful to the Gospel…”

Gian Cabuena, who graduated from the Catholic school University of Santo Tomas, said he remains hopeful that the US court ruling would bring favorable development in the Philippines.

“Yung ruling magiging spark siya sa Pilipinas lalo na para mas lumagablab ang love… Kung ang US nagawa nila, kung love lang ang basehan, kayang kaya naman natin eh (The ruling may spark a change in the Philippines, to keep the love burning… If the US can do it, and if love is the basis, then we can certainly do it too),” Gian said.

equality, on the right to love whoever we want to love),” he said