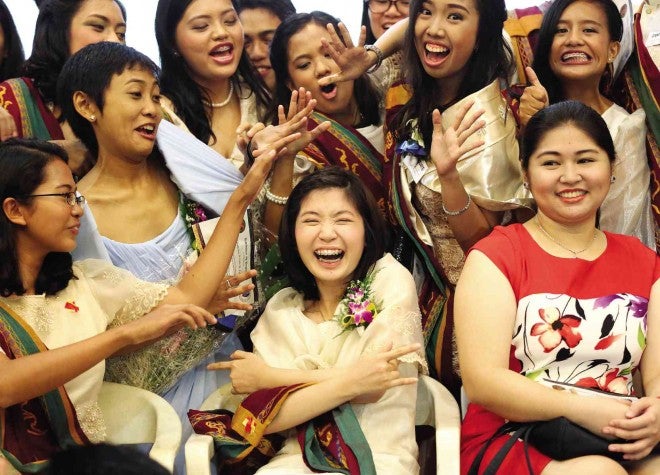 Funny, quirky side of Tiffany Uy

By now, the Filipino people know her story—Tiffany Grace Uy is the 22-year-old BS Biology student of the University of the Philippines Diliman who aced all her subjects except for one and graduated with the weighted grade average of 1.004, the highest obtained in the UP’s history since World War II.

But she is not your conventional overachiever.

In an interview with INQUIRER.net, Uy shared how a Pokemon character taught her to be selfless, recalled how she tried cooking but her family found it inedible and shared that just like any college student, she also failed in exams and procrastinated to finish class assignments.

Accomplishing a historic feat might make someone tear up for joy but when Uy was informed that she got the highest grade in UP, she was at the ladies room.

“I actually had been struck by a bad case of amoebiasis when the news came out. I was in and out of the comfort room, and I was thanking the congratulating family and friends from my toilet,” she said.

She said that since she doesn’t compute her grades, the news that her WAG surpassed the grade of 2011 BS Mathematics graduate John Gabriel Pelias of 1.016, shocked her and her family.

“I was really shocked myself. Yeah, more than 1.25, I think the straight unos shocked the hell out of me. My family was also shocked and happy for me, but there was no crazy hoopla! We spent it like every other normal day. Except that day, I was stuck in the toilet,” she said.

Uy got 1.25 in Art Studies I, the only subject which tarnished her perfect “uno” streak.

‘Uno was never the goal’

The 22-year-old student said that she is diligent in her studies not because she strives to get the highest marks but because it will help her when she becomes a doctor.

“I didn’t even compute my WAG. Uno was never the goal. Whenever I come to class, I take the subject seriously because I’m thinking that whatever I might learn might help me save a life someday. So rather than worry about my numerical status, I strive to ensure I really understand the subjects,” Uy said.

Her desire to become a doctor started when she was treated for head injuries at age six.

“An accident when I was younger instilled the dream of becoming a doctor in me and since then I’d work really hard,” she said.

And worked hard she did, saying that she studied her lessons three to four times. But that does not mean that she did not fail an exam, nor procrastinate for a subject requirement.

“I have the worst study habits: I procrastinate a lot, and cram a lot, and pass Formal Reports at the very last minute— the 59th minute of 11 p.m.! But when I do cram, I cram very hard. On each and every project, I work very hard because my motivation is to understand the subject matter, so that someday I can use it to save lives,” Uy said.

In August, she will enter the UP College of Medicine, where she wants to “narrow the gap we have in health care equity.”

Aside from her childhood accident, a Pikachu stuff toy from her grandmother also influenced her to save the lives of other people.

“My grandmother gave me a Pikachu stuffed toy when I was in Prep, and upon watching the Pokemon movie where Pikachu refused to hurt its clone because it was a Pokemon just like him. He instantly became a hero I looked up to and wanted to become,” she recalled.

But her grandmother’s death in 2013 also proved difficult for her.

“Death: It’s the one thing I have a difficulty dealing with—because it’s something you have to face when it’s there. So the rest of my life, I want to do my best to prevent that from coming to other people,” she added.

While growing up, she said that she was not forced to become an achiever, despite being born to parents who are doctors.

“As I grew up, when I’d work really hard, my parents didn’t like it. ‘Golden Moderation,’ they always told me,” she shared.

So she did not just work hard but she also played harder.

“I get addicted to watching anime shows, Korean reality TV shows, eat a lot of junk food, catch up on 9gag once in a while. But I have very weird interests. There was one summer I spent learning Chinese calligraphy. Another summer I tried to learn basic flute, to the chagrin of my teacher because I was really really bad at it. The next summer I went to learn how to fix computer hardware, breaking open a CPU and then putting things back together,” she said.

She said that she also tried cooking (but everyone told her that her masterpieces are not edible) and she is poor in physical sports (because she is prone to accidents). But she is now a licensed scuba diver.

“Diving, I think, is a wonderful hobby – when you dive, under the calm of the sea, you see all these amazing life forms, like life is proving how awesome it is right at your face!” she gushed.

Grade just a number for No. 1 grad in UP’s post WWII history