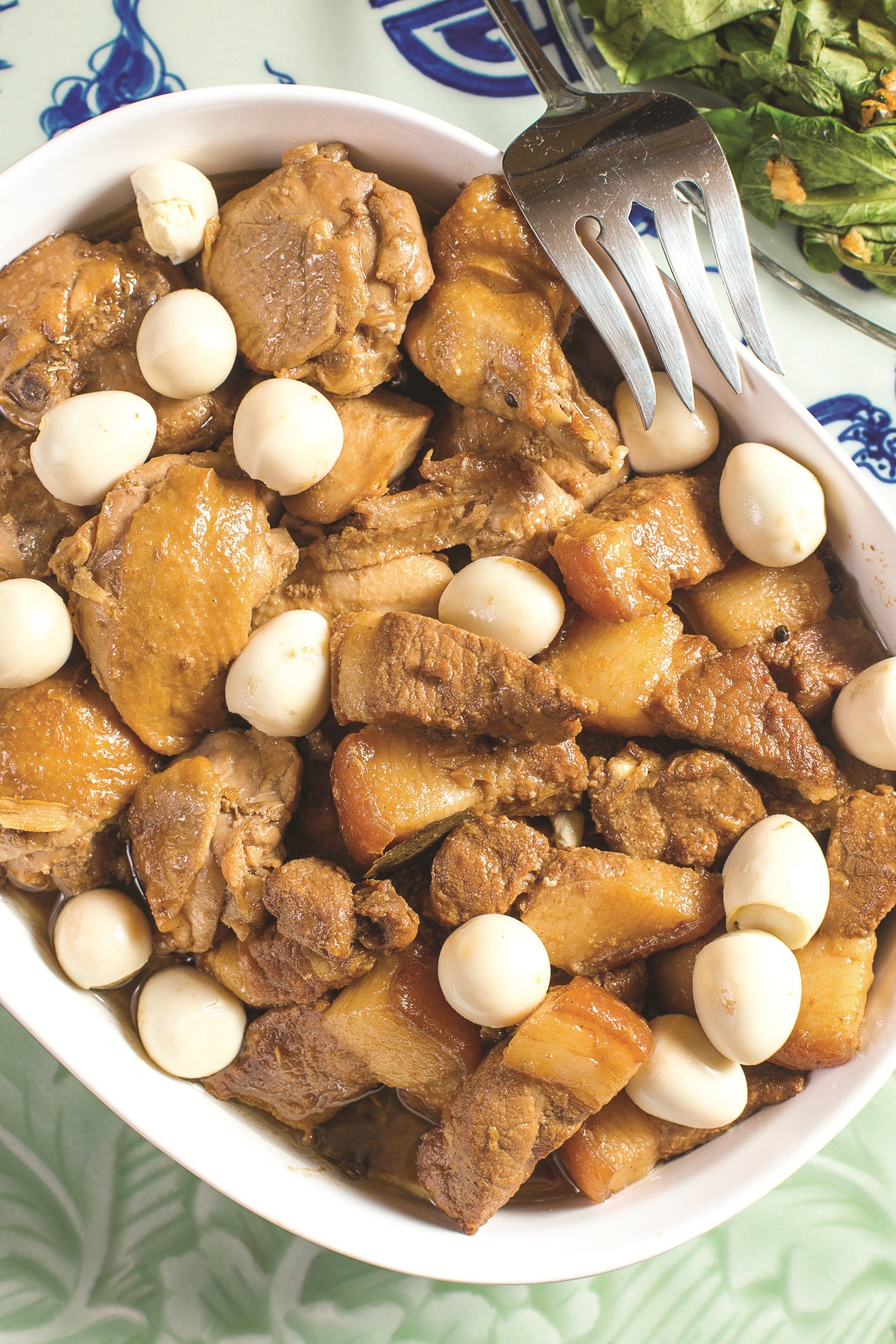 This chicken pork ‘adobo’ brings back the flavors of home

One dish that kept Sylvia Verzosa Celis from being terribly homesick when she lived in the United States for a decade was adobo. When sadness crept in, she prepared her specialty, Chicken-Pork Adobo garnished with hard-boiled quail eggs.

“Even the Americans enjoy my adobo,” says Celis, who learned the basic recipe at age 17 from her Spanish dad. However, she developed and created her own version through the years.

Instead of the chicken eggs her father preferred, she now uses quail eggs for easy munching. Regular soy sauce was replaced with coconut soy sauce that results in a lighter, subtler flavor but is darker in color.

From the ordinary vinegar, she opted to use apple cider vinegar as the curing liquid that easily awakens the nuances and aroma of the stew.

Celis also combines the mixture with oyster sauce and brown sugar to balance the salty-sour elements of the adobo.

The result: a deceptively light and fragrant dish with a rich aftertaste.

“Adobo is so easy to make but it entails a lot of love for it to be really good and allow others to enjoy it, too,” says Celis, who has two sons, Terrence and Stephen, who regularly crave for her adobo. The family loves her adobo with lots of sauce that they liberally drizzle over rice.

Celis pairs her adobo with boiled veggies, such as kangkong and okra dipped in bagoong Balayan with calamansi. The rice is served either steamed or fried.

Cooking comes naturally to Celis as both her parents would cook at home when she was growing up in Tutuban, Manila. She would eat paella and callos as well as Ilocano dishes (her mom is from Ilocos) like dinengdeng, pinakbet and bagnet.

She would attend the short classes of Sylvia Reynoso-Gala, Dorothy Ferreria and Grace Mercado, to name a few.

Celis also dabbled in baking which she learned from her aunt in Navotas. She first baked lengua de gato and fruitcake, followed by butterscotch, food for the goods and brownies.

She began selling baked goods and, soon after, was supplying the school canteens of Centro Escolar University, Far Eastern University, Polytechnic University of the Philippines, Philippine School of Business Administration and San Beda College, among others.

Through word of mouth, she started catering services for various companies and corporations including the Philippine Charity Sweepstakes Office.

This, however, was temporarily put on hold when she moved to the US to hone her baking skills and work as a caregiver. One of her wards included Hollywood columnist Marilyn Beck who adored Celis’ Chicken-Pork Adobo.

While working as a caregiver in Chula Vista, California, Celis pursued her passion and trained in various baking schools. She even won first place for her fondant wedding cake in one of the school competitions.

Now Celis helps her children run their own canteen concessions in schools. She has also resumed her catering business and is set to open her own bakeshop.

Mix well and set aside for 30 minutes to one hour. Then remove pork and chicken from the marinade. Set aside marinade.

In a medium-heat pan, add oil and garlic. Fry pork. Add a little water and let it boil till tender. Set aside.

In another pan, add oil and garlic. Fry chicken. Then add pork and the remaining marinade. Let it boil and simmer for few minutes.