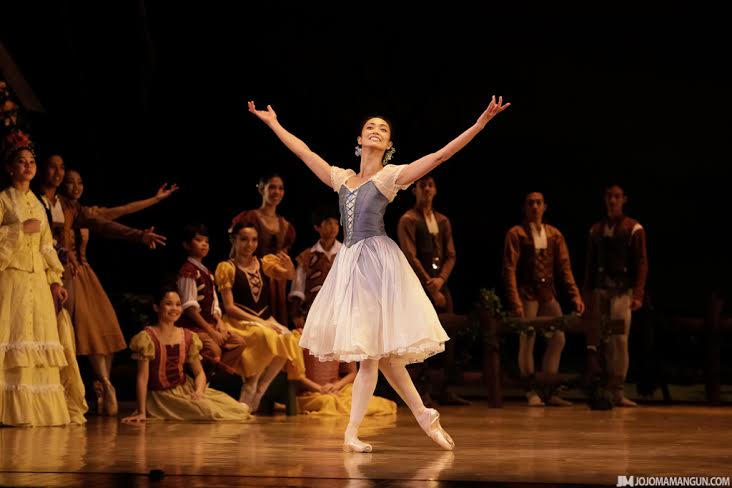 Abrera performed with Ballet Philippines at the Cultural Center of the Philippines (CCP) on Sept. 19, 2014, as the title role in “Giselle,” partnered by James Whiteside, a principal dancer with ABT. The night’s performance

ade for a warm homecoming for her, capped by a lengthy standing ovation and a meet-and-greet worthy of rock stars. Her interpretation was described as “ethereal” and “another landmark Giselle at the CCP.”

When Abrera made her fortuitous ABT debut in that role during the company’s 75th anniversary, critics proclaimed her dancing to be “luminous, stylish and heartfelt.” That particular evening’s performance had 200 past and present ABT members among the audience, several of whom have performed as Giselle and Albrecht in the past.

In between “Giselle” rehearsals, Abrera also shared her knowledge and technical mastery with Manila’s budding ballerinas through two master classes held at the CCP.

Prior to her visit, she started Steps Forward for the Philippines, a charitable organization dedicated to providing for the educational and creative needs of children in the Philippines. During her weekend break between rehearsals, Abrera squeezed in a visit to Guiuan, Eastern Samar, one of the most devastated areas in the wake of  Supertyphoon “Yolanda.” In that short visit, she distributed school supplies and visited the school that was rebuilt thanks to the funds raised by Steps Forward for the Philippines.

Born in Manila, Stella Abrera began her ballet training with Philip and Charles Fuller and Cynthia Young in Pasadena, and continued her studies with Lorna Diamond and Patricia Hoffman in San Diego. She then spent three years studying the Royal Academy of Dancing method with Joan and Monica Halliday at the Halliday Dance Centre in Sydney, Australia.  Abrera received the Gold Medal at the Royal Academy of Dancing’s Adeline Genée Awards in London in 1995.

Abrera joined American Ballet Theatre as a member of the corps de ballet in 1996 and was appointed soloist in 2001. Her repertoire with ABT includes Cinderella in James Kudelka’s “Cinderella,” Gamzatti in Natalia Makarova’s “La Bayadère,” Myrta and the Peasant pas de deux in “Giselle,” Gulnare in “Le Corsaire,” The Ballerina in Alexei Ratmansky’s “The Bright Stream,” Lescaut’s Mistress in Kenneth MacMillan’s “Manon,” the Sugar Plum Fairy and the Snow Queen in Kevin McKenzie’s “The Nutcracker,” the Lilac Fairy and Princess Florine in “The Sleeping Beauty,” Hermia in Ashton’s “The Dream,” and the First Passerby in Robbins’  “Fancy Free,” among many others.

Abrera is the first Filipino-American to reach the rank of principal dancer with the American Ballet Theatre. Past international Filipino principal dancers include Maniya Barredo and Nicolas Pacaña with Atlanta Ballet, Anna Villadolid with Munich Ballet, and Ballet Philippines alumni Rey Dizon with Les Grands Ballets Canadiens, and Toni Lopez Gonzalez and Brando Miranda, who danced with Washington Ballet, and the Royal New Zealand Ballet, respectively.

Jeffrey Cirio, also of Filipino descent, joins American Ballet Theatre as a Soloist. Cirio won a Gold Medal at Youth America Grand Prix in 2005, a Princess Grace Fellowship and a Gold Medal at the Helsinki International Ballet Competition in 2009. He has been a principal dancer with Boston Ballet since 2012.