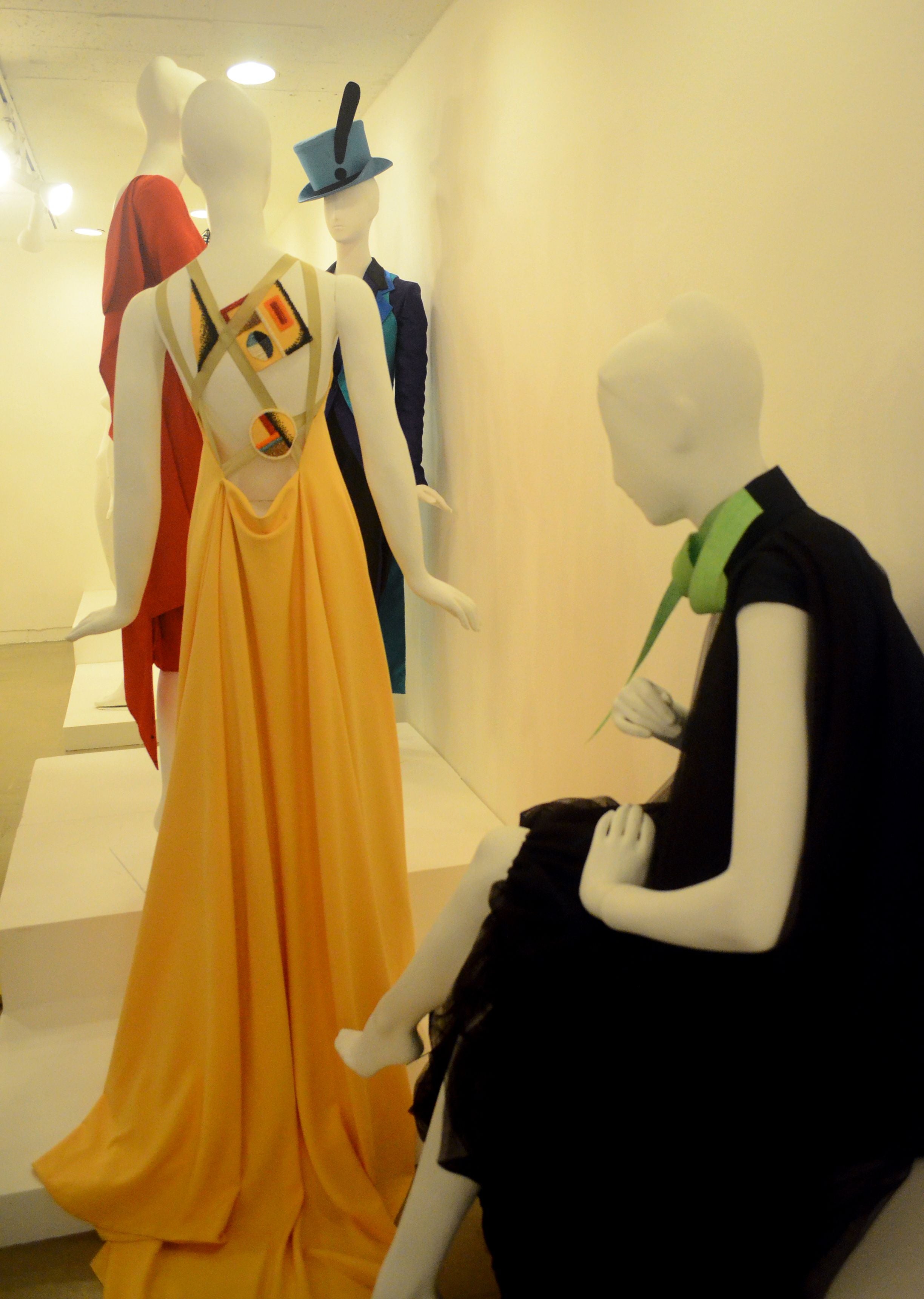 THE 39 CLOTHES are based on either specific paintings or the style of a particular painter.

Jojie Lloren presents his fashion as art–at the CCP, no less

Jesus “Jojie” Lloren decided early on that the guiding principle in his profession would always be to earn the respect of his peers, more than to make plenty of money.

So when the Cultural Center of the Philippines expressed interest last year in exhibiting his Red Charity Gala collection, which he showed at Makati Shangri-La Manila in October, he didn’t think twice.

“I’ve always been self-indulgent when it comes to shows,” Lloren said last week when Inquirer Lifestyle paid him a visit in his Pasay atelier. “I’m not the kind of designer that, after a show, ubos ang damit. So when I heard from the CCP, my instinct was to keep the clothes and not sell them.”

The prestige of being able to exhibit his works in a national institution easily won over the prospect of commerce.

Tonight, Lloren unveils “Musings with the Muses,” his first solo exhibit of the 39-piece Red Charity Gala collection, inspired and based on Filipino painters and paintings.

“Musings” at the CCP’s Bulwagang Fernando Amorsolo and Pasilyo Victorio Edades is interspersed with the photography of model-photographer JoAnn Bitagcol. Art gallery owner Albert Avellana, Lloren’s neighbor and friend, is the curator. It will run until July 23.

The 39 clothes, to be shown tableau-style, were based on either specific paintings or the style of a particular painter, not necessarily literal interpretations, such that Avellana vetoed the idea of showing the clothes alongside the images of the paintings.

Lloren’s collection was based on the works of artists, from Luna to Joya, Amorsolo, Manansala, Hidalgo and Legaspi, to younger artists like Mac Valdezco and Geraldine Javier.

Lloren created a 40th piece to depict his experience in creating the collection. The dress was photographed in various states and angles by Bitagcol.

“At the Pasilyo Victorio Edades, it’s the 40th garment that’s on the wall,” Avellana said. “It becomes the art. It’s the reverse of what he did for the collection.”

“When I create a collection, it’s always about self-expression. That CCP liked it made it doubly fulfilling,” Lloren said. “When you show in a museum, you take out the commerce aspect. This is a once-in-a-lifetime opportunity. I’m still alive and I’m showing at the CCP. Even if I didn’t make money from this collection, all my hardship has been worth it.”

Lloren, Avellana, Bitagcol and other collaborators are also putting together a book based on the same collection—“not about me,” the designer was quick to clarify—meant to be used as reference tome by art and fashion design students. It’s a nonprofit endeavor that will benefit the CCP and the Clothing Technology Department of the University of the Philippines, Diliman, Lloren’s alma mater.

Asked if exhibits such as “Musings” result in elevating the status of fashion to an art form, Avellana said the country could be on its way there.

“I attempted before here at the gallery,” where Lloren himself made two pieces for the show, the art dealer said. “It was a sculptural piece made of zippers and tape measures. I got an inquiry. I guess the person just didn’t know how to work it into his art collection. Hindi pa nila alam kung paano gagamitin o idi-display sa bahay. But the awareness is already there, like this exhibit. They see the relevance.”

“I’ve seen houses where they had panuelos and baros framed and displayed on their walls,” Lloren said. “So maybe in 100 years,” he added with a laugh.

Known for his impeccable tailoring, Lloren has been working as fashion designer since 1988. He studied at Ecoles de Chambre Syndicale dela Couture Parisienne in Paris, part of the grand prize in the Concours de Jeunes Createurs de Mode in Paris in 1998.

On July 14 at 3 p.m., Lloren will talk at the CCP’s Museo ng Kalinangang Pilipino, to share his thoughts about the collection. It’s free to students and all interested individuals.