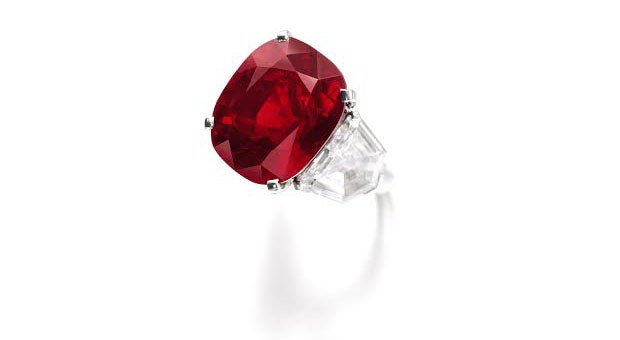 Could the Philippines be the source of the next world record-setting price for a piece of jewelry sold in an auction?

Sotheby’s broke records in May at its “magnificent and noble jewels auction” in Geneva. It’s likely hoping to replicate—and perhaps even surpass—them when it holds its autumn auctions in Hong Kong in October.

According to Sotheby’s, jewelry auctions have grown exponentially in Asia since the 1990s, and Hong Kong now stands alongside New York and Geneva as one of the major jewelry auction centers, where the world auction record prices for jadeite (US$27.4 million) and a fancy vivid pink diamond ($17.77 million) were made in 2014.

Jewelry sales is on an upward trend. In 2014, it accounted for 21 percent of Sotheby’s auctions in Asia, amounting to $189.3 million.

“Now’s a good time to sell,” said Brett O’Connor, Sotheby’s senior director and senior international jewelry specialist, via phone from Geneva. “There are more buyers than sellers. There’s high demand and the supply is finite. The market is strong at the moment.”

O’Connor, a 22-year industry veteran, will visit Manila July 9 to source jewelry for sale and meet up with prospective consignees.

Based in Hong Kong in the early 2000s, he made similar sourcing trips to the Philippines in those years. He said he found Manila to be “a rich source of classical 20th-century pieces.”

This time he is on the lookout for “very high quality stones, single or set with pavé,” possibly from quality jewelers like Cartier and Van Cleef and Arpels.

At recent auctions, trend has shown collectors’ continued interest in colored gems, such that the 25.59-carat “Sunrise Ruby,” which fetched $30.3 million in Geneva in May, more than tripled the previous record for a ruby, set only in November also in the Swiss saleroom. It also set the record price per carat for a ruby.

The “extremely rare” Burmese ruby also set the world record price for a jewel by Cartier. The previous record was made in Hong Kong only last year, for the Hutton-Mdivani jadeite bead necklace, which sold for $27.4 million, more than double its estimated price.

Recent headliners at the Sotheby’s salerooms also include the 8.72-carat “Historic Pink Diamond,” believed to be from the collection of a niece of Napoleon Bonaparte I, which sold for $15.9 million also in May; a pair of Burmese sapphire and diamond ear clips, a combined 32.67 carats ($3.4 million); and a 30.23-carat Kashmir sapphire and diamond brooch by Cartier ($6.1 million). It also sold a two-strand natural pearl and diamond necklace for a record $7 million.

O’Connor cited Japan, Hong Kong, Thailand and Singapore as good sources of jewelry for sale, with a special mention of Bangkok for colored stones. All pieces sourced in the region are auctioned in Hong Kong, he said.

For jewelry sales at Sotheby’s Hong Kong, total transaction value from the Philippines, including buying and selling, more than tripled from 2010 to 2014, according to the auction house.

O’Connor, however, denied that there’s correlation of his visit to next year’s elections. An election year is a time when, typically, the economy seems rosier and buoyant for buyers, and property sellers are on a huff to divest or get stuck with the goods until after the elections.

The jewelry expert, who will do free valuations at Discovery Primea in Makati (contact [email protected], tel. +85228228112 for details), said he’s looking for pieces valued at a minimum of $5,000. He typically asks for the story behind the piece, how it was acquired, or any other special details relating to the jewelry. Usually, potential sellers bring receipts.

“We respect privacy, and we understand if the consignee wishes to remain anonymous,” he said. “We also avoid controversy,” he added, such that they don’t deal with pieces of questionable provenance.

There are several factors that influence the spike in jewelry auction prices, he added, citing rarity, quality and beauty, as well as the piece’s history.

There’s also a broad range of auction buyers, including serious jewelry collectors and individuals looking for specific pieces, like an engagement ring, but don’t want to pay retail prices.

“You see, when you buy in an auction, you’re essentially paying for the sale market price,” he said.

“And we don’t use the word ‘investment’ when it comes to jewelry.” While it’s true that jewelry has the potential to appreciate in market value, he said, it’s not true all the time. The market can get flooded with a certain gem, for instance, which could bring down prices.

Instead, he said, you raise your paddle only for jewelry that you like.