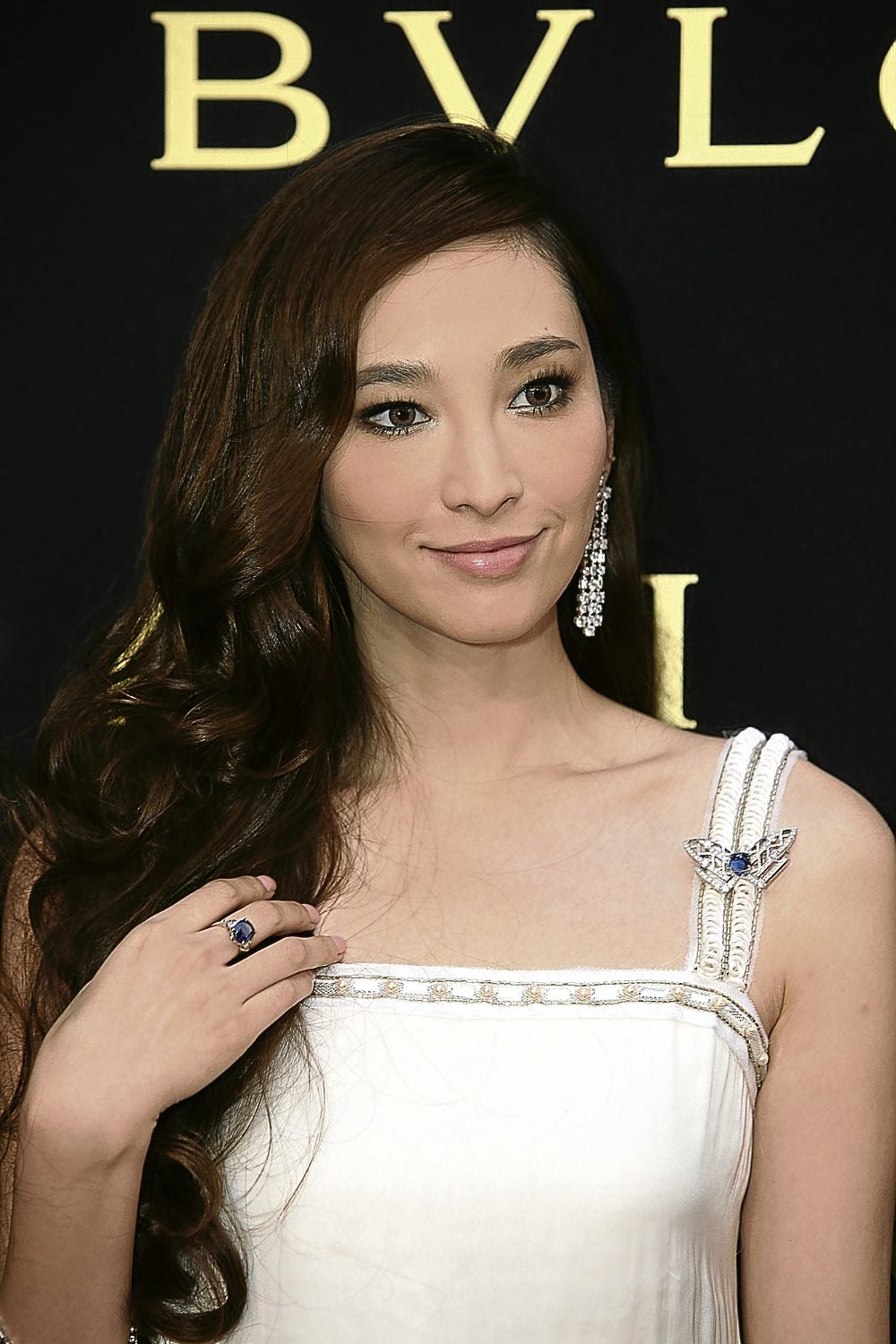 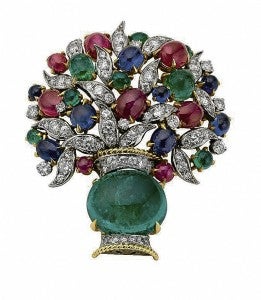 “I always visit Bulgari, because it is the most important museum of contemporary art.” —Andy Warhol

The Bulgari Retrospective Exhibition, which was talked about the world over when it opened in Rome in 2009, is now in Beijing, the first time this magnificent collection of jewelry and art pieces culled from a more than 100-year-old art heritage is being put on display in Asia.

“Bulgari: 125 Years of Italian Magnificence” made waves in 2009 as soon as it opened grandly in Rome because it displayed, many of them for the first time, the Bulgari jewels of such global icons as Elizabeth Taylor, Anna Magnani, Claudia Cardinale, Sophia Loren, Ingrid Bergman and Gina Lollobrigida, who herself graced the opening at the Museum in Rome and later at the famous Castel Sant’Angelo in Rome.

This time, the exhibition at the National Museum of China in Beijing also has the same crowd-drawers, if not more, since the Beijing museum has bigger space, with seven projection galleries to run footage from the vintage movies where the jewels were worn by the stars. 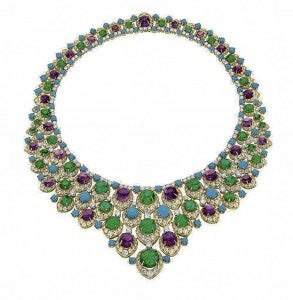 While the Liz Taylor jaw-dropping baubles especially crafted for her by Bulgari through the decades had been pulled out and returned to the actress’ estate after her death this year, the Retrospective is not lacking in Hollywood glam star wattage, which perhaps explains why it continues to draw queues to the Beijing Museum.

It now includes some Bulgari pieces from the collection of the late Princess Grace of Monaco. Grace Kelly was the American actress whose marriage to Monaco’s Prince Rainier became the fairytale of the ’50s. This retrospective has her Bulgari coin necklace and cigarette case.

The Bulgari Retrospective is a significant showcase of the Italian decorative arts and the history of jewelry. Opened to the Chinese public last Sept. 4 and running until Nov. 3, it is a comprehensive survey of European jewelry design, as seen in the creations of Bulgari.

The retrospective coincides with the celebration of the 150th anniversary of the Italian Republic this year. It marks the growing communication and exchange between Italy and China, which Gianni Letta, Undersecretary of State at the Italian Prime Minister’s Office and a member of the organizing committee, underscored in his congratulatory letter. 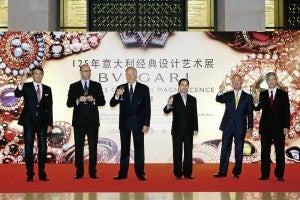 Francesco Trapani, heir to the Bulgari heritage and now chief executive officer of the Bulgari Group, led the Bulgari officials in the Beijing opening. He said that the retrospective underscored how the Bulgari archives of jewelry design and arts craftsmanship “continue to be the source of inspiration” for contemporary jewelry design in the 21st century.

From its beginnings in the late 19th century, Bulgari is now a global brand famous not only for its jewelry but also for its watches, accessories and fragrances. “We are very proud to share our history, heritage and values with the Chinese public as ambassadors of Made in Italy’s expertise and savoir-faire,” he said.

The exhibition has nearly 600 exquisite masterpieces of jewelry, decorative objects, watches and clocks, dating back to the opening of the first Bulgari shop on Via Sistina, Rome, in 1884. This fascinating saga will illustrate the origins and success of an absolutely distinctive style whilst celebrating the extraordinary inventiveness and high level of workmanship that characterizes all Bulgari creations. Most of the pieces will be on public display in China for the very first time.

In seven galleries arranged in chronological and thematic order, the exhibit explains and shows the distinctive style, inventiveness and innovation, and high level of craftsmanship of Bulgari jewelry through various eras.

The visitor starts with a collection of silver objects (belts, buckles) created in the late 19th century by Sotirio Bulgari, a Greek silversmith blessed with the creativity and business sense 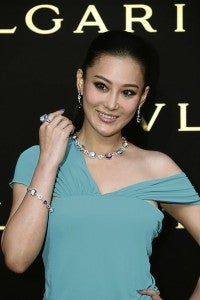 of a visionary. Migrating to Rome to seek his fortune in 1884, he laid the foundation of what would be one of the world’s greatest jewelry houses. These pieces show classical, Ottoman and Byzantine influences.

From there the visitor is led to the splendid diamond-set jewels in the Art Déco style. In this period, the ’30s, the founder’s two sons, Giorgio and Costantino Bulgari, took over the reins of the firm. Among these is a necklace tiara worn recently by Keira Knightley.

The gallery of the ’40s and ’50s shows how Bulgari’s designs were still influenced by Parisian jewelry.

The gallery devoted to the ’60s showcases the pieces of the decade that defined Bulgari’s identity—the beginning of the distinctive “Bulgari style,” coinciding with the leadership of the third generation of the Bulgari family. Emerging in this period were the distinctive features that would make the brand world-famous: bold, stylized naturalistic forms, featuring volume and strikingly original color combinations—a genuine “Italian school” of jewelry that contrasted with the more traditional French style.

Up until then, according to exhibit curator Amanda Triossi, it was customary for Western jewelers to combine only one colored precious gem with diamonds, for example rubies with diamonds or emeralds with diamonds. In the ’60s, Bulgari mixed all colors. A fine example is a necklace and earrings set with sapphires, rubies, emeralds and diamonds from 1967, featured in the exhibit catalogue, and worn by Knightley at the 2006 Oscars. 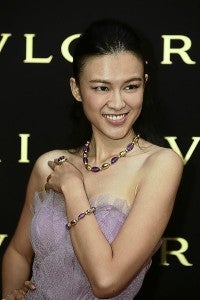 The next rooms showcase the eclectic creations of the ’70s, inspired by pop art, and the ’80s, whose daring, inventive designs so impressed Andy Warhol. The “ready-to-wear” concept of jewelry emerged in this period.

The ’90s saw the unlikely combinations of materials, also the years of excess and extravagance, when Grace Jones wore multiple layers of fine jeweled necklaces as a “hat,” and Tina Turner threatened to cancel a concert if no one could find her most precious good-luck charm: a pair of Bulgari earrings.

The final gallery has the breathtaking selection of contemporary jewels, a harbinger of the 21st century.

Among the remarkable pieces from private collections is the Flora necklace made of 80 carats of the finest rubies and a cabochon sapphire of 321.27 carats, mounted as a pendant on a silk cord.

In between the galleries, the visitor can take a breather and sit in a projection gallery to watch footage from Hollywood movies where the Bulgari jewels were worn.

One gallery features the “numismatic jewels”—coins from antiquity, popular as jewelry in ancient Rome. Bulgari reintroduced coins into jewelry in the 20th century.

Another design feature is the snake motif, a Mediterranean symbol from the era of Egyptian pharaohs and a classic image in jewelry, reinterpreted by Bulgari in the ’40s. This design evolved into the iconic Bulgari wristwatch. Then there is the “BVLGARI” logo itself, which was inspired by ancient Roman epigraphy and transformed into an ornamental feature in many of the house’s most successful collections.

In addition to jewel and watch designs, the retrospective also has a collection of documents, many on display for the first time—sketches from various periods and photos of the artists, aristocrats and celebrities who have worn the jewelry.

An entire section is devoted to the years of the Dolce Vita, with film footage and photos illustrating Bulgari jewels worn on and off the screen by legendary actresses of the time. These

images illustrate the close ties between Bulgari and the film industry, a partnership that began in the 1950s and continues to this day.

In an interview with Inquirer during the opening of the retrospective, Triossi noted how, unlike in the Rome exhibit, the Beijing leg has archival documents and films to complement the precious jewels on display. She singled out the oldest piece on exhibit—the 1870 silver bracelet—and the most recent, a diamond necklace with a 44-carat flawless diamond.

Such pieces, she said, are collective proof that jewelry is a miniature work of art, and its appeal cuts across social and culture barriers.

Indeed, speaking of barriers, who would ever have thought that one would see the day when a symbol of Western culture, art and luxury, such as Bulgari, would be a hit in what was once an insulated bastion of Communism. Watching Francesco Trapani—the son of Lia Bulgari and Agostino Trapani—alight from a limousine in front of the massive National Museum and walk its steps alongside Chinese officials, one felt incredulous, especially upon realizing that only a stone’s throw away from it are the Tiananmen Square and the Forbidden City, the vast fortress of imperial might where once Chairman Mao stood before a mammoth assembly of humanity.

Yet, that late afternoon of the opening, as the sunlight tried to pierce through the Beijing haze, a phalanx of paparazzi formed in front of the National Museum, waiting to snap the bejeweled VIPs streaming in.

Inside awaits the finest collection of jewelry, accessories and art objects. It is also the clearest proof that beauty and art could outlive ideology.