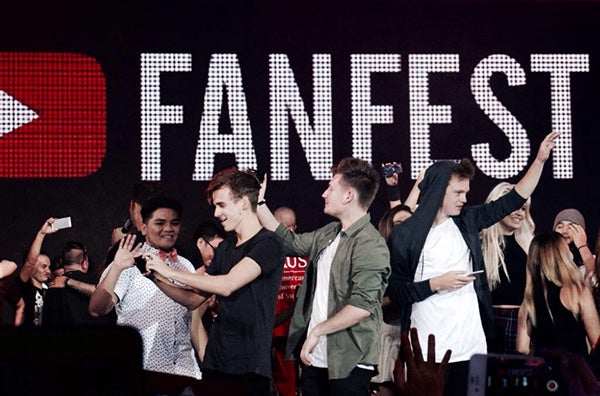 YOUTUBERS wave to their fans as they end the show. PHOTO BY MIKKA ELLA ALBURO

We did it, #TeamInternet! We brought YouTubers to Manila!

About a month ago, inviting YouTube content creators— better known as “YouTubers”—was only an idea. It was not until a 15-year-old girl started a movement through a hashtag on Twitter that the event would finally become possible.

Reese Limbaga, a YouTube fan since 2013, tweeted with a hashtag #BringYouTubersToManila when the YouTube FanFest (YTFF) was happening in Singapore. She invited her friends and fellow YouTube fans to do the same, and it trended not only in the Philippines, but worldwide. It eventually came to Google and YTFF’s organizers’ attention.

“It was in May, when we were in Singapore, and I thought we were doing really well, then all of a sudden, on top of Twitter trends, came the hashtag #BringYouTuberstoManila,” said Jasper Donat, CEO and co-founder of Branded Ltd., the team handling the fan fest. “We sat down with our friends from Google and said, ‘Hey, why don’t we do it?'”

Donat admitted that they were planning to hold the fan fest in September this year. It was Google who insisted on having it in four weeks .

“This event did not exist four weeks ago. We take pride in this because we now have the most amazing line-up, and a lot of them have never been in a fan fest before,” he said. Included in the line up are international YouTubers AJ Rafael, Bethany Mota, Macy Kate, Kurt Hugo Schneider, Joe Sugg, Caspar Lee, and Oli White, and local creators such as Lloyd Café Cadena, Mich Liggayu of Jamich, Flip Top Battles, Anna Victorino of Real Asian Beauty, Chicser, Jireh Lim, Bogart de Explorer, All Star Productions and Donnalyn Bartolome.

Black Eyed Peas member apl.de.ap and The Voice Philippines finalist Jessica Reynoso also made a surprise appearance during the show.

Limbaga said having YTFF in Manila was something she did not expect to happen so soon. “It was kind of complicated so we didn’t really expect that within a year they were going to be doing it. I am thankful of what is happening now.”

But even with very limited time, Donat said it would not be possible without the help of Reese and the sponsors.

“It’s been a long four months on the road for YTFF and I need a holiday. Can you start a hashtag that’s #BringYouTuberstoBoracay?” he quipped.

The fan fest, which was held at the Marriott Grand Ballroom on June 26, was filled with over 3,000 fans, mostly teenagers. People were required to stand, as there were no seats provided, to accommodate the large crowd.

Being huge influences on the youth, the YouTubers shared that creating content for their YouTube channels has become a challenge nowadays. White, a British vlogger (video blogger), said it is a massive responsibility to take on.

“That’s what you take on your wing where you have to be a role model because there are hundreds and thousands of people watching you. You are very influential to what they are doing, as well on the Internet,” White said.

Lee, a South African vlogger based in London, echoed White, saying that when filming, “You have to very careful with what you say because once you have uploaded it (the video), it will be there forever.”

Before becoming famous YouTubers, however, some of them confessed that it was not an easy road to take. Singer Macy Kate said she started out with only a laptop webcam as equipment.

“I was doing covers of songs and at the time, I honestly couldn’t get a camera because I didn’t know how serious this would be. Then I realized I had to upgrade a bit with an actual camera,” she said.

Schneider, a musician and songwriter who graduated from Yale University, shared the same struggle. It was back in college when he started uploading videos, but he did not have much time to focus on YouTube primarily.

“So it was just mostly in the middle of the night, recording and doing something before I collapse and sleep in exhaustion,” he said.

Fashion vlogger Mota, meanwhile, said it is important to engage viewers with the content you are creating.

“Be consistent and upload often because that gives your subscribers the assurance that you are there constantly,” Mota said.

She said that being on the Internet, they cannot avoid hate comments every now and then. The trick is to respond positively or not to respond at all.

“There’s one person who would constantly comment on my videos and would find something negative to say, no matter what it was. I sent that person a nice message, and after that, she became someone who loves my channel, and she apologized,” Mota said. “Sometimes it can just be cry for help. Maybe they’re just having a bad day, and they want to take it out on someone.”

As for the vloggers, with fans keeping track of their daily lives, they said it may be hard for them to keep their private lives.

“But what’s great about YouTube is that you can edit videos and you get to completely choose what to share or not share—not like during events, we don’t have control of what we might say,” Lee said.

For Fil-Am singer AJ Rafael, YouTube has become an avenue especially for Asian-Americans like him, who are not on mainstream media.

“It’s the fact that YouTube exists and allows us to have that as a platform. I owe YouTube a lot and I wouldn’t be where I am now,” he said. “This may become too overwhelming, but you just have to show love for the fans—that’s the reason we are here.”

Right after the event, fans are now starting to tweet the hashtag #BringYouTubersBackToManila. Limbaga said Filipino YouTube fans will definitely be waiting for the next fan fest.

“YouTube is changing the Internet and the world of social media by connecting with everybody else. If they can relate to you, you’re basically connecting with them already, but virtually. It greatly influences the youth, and it’s not just all about the entertainment, but how much knowledge a video can give to a person,” Limbaga concluded.