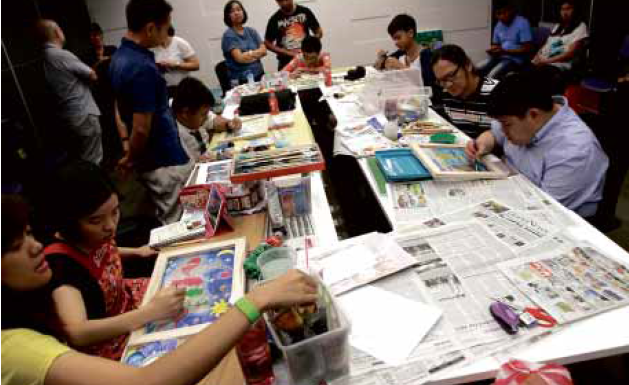 Int’l runway to showcase best in Filipino artists with autism

With light strokes and several flicks of a brush, 24-year-old Vico Cham deftly dabs a thin coat of paint on a piña cloth, exclaiming “Got it!” every time he finishes a portion of his masterpiece, a version of the late National Artist Abdulmari Imao’s colorful sari fish.

Working on the same soft sheer fabric is 21-year-old Nick Huang, whose serious mien unexpectedly breaks into song every time he takes a break from painting water lilies.

The two will join other artists Nina Bantoto, Jorel Alegre and Daniel Sanchez—all of whom were diagnosed with autism at an early age—in a unique and worldwide fashion event meant to raise public awareness on autism, a widely misunderstood disability.

People with autism also have difficulties coping with changes and are bound to display offbeat, restrictive and repetitive behaviors.

Though the fashion events will start in April next year, the five artists, aged 14 to 24, are already mastering the special skill of painting on piña cloth under the tutelage of renowned artisan Anna India de la Cruz-Legaspi.

Also supervising them is San Francisco-based Filipino-American fashion designer and textile technologist Anthony Cruz Legarda, who frequently flies in to check on the young artists’ progress and to coordinate with them his designs for the upcoming fashion shows.

The artists’ workshop, held at the Unilab Foundation in Mandaluyong City thrice every month, is part of the Fashion Arts Autism Benefit (FAAB) launched April this year by the Autism Hearts Philippines Inc. (AHPI) to mark the 8th World Autism Awareness Day.

Founded in 2009, the AHPI is a community-based center engaged in the development of support services for children and adults with autism.

The FAAB project will feature the five artists’ paintings on piña cloth that will be transformed into at least 20 gowns and formal wear to be paraded in fashion shows in Manila, San Francisco and New York during the United Nations World Focus on Autism event, and in Geneva at a World Health Organization event.

The artworks are based on masterpieces by Filipino National Artists Jose Joya, Vicente Manansala and Mauro Malang, among others.

The gowns will also be put on international auction at the world tour in April 2016, in time for the celebration of the next World Autism Awareness Day.

The yearlong fashion tour will come full circle in April 2017, with the gowns given to the winning bidders in Manila. According to organizers, the proceeds of the auction will help the participating artists save up for their future.

AHPI director Solinda Bautista said the project would hit three birds with one stone, so to speak.

“It (will) allow individuals with autism to maximize their potential while raising autism awareness, community acceptance and inclusiveness worldwide. At the same time, the fashion show will promote the richness of Philippine art and weaving,” Bautista said.

“We are always saying we need to raise awareness and acceptance, but this particular project puts more emphasis on inclusion in society and the community,” she added.

From awareness and acceptance of children with autism, which was the main focus of autism advocacy when it started in the Philippines some 25 years ago, the campaign has widened to address the issue of finding permanent employment for individuals with autism spectrum disorders.

This is the thrust of the FAAB project, said California-based Erlinda Borromeo, the president of Autism Hearts Foundation, who spoke of exceptionally talented Filipino artists with autism who are just waiting to be discovered and tapped as productive members of society.

“Our Filipino artists [with autism] are well known for their exceptional talents. [They are] at par with international artists. [So I thought], how could I bring their talent and showcase their amazing works in a very unique way in an international mainstream arena?” asked Borromeo, who also has a grandson with autism.

The FAAB proved the ideal venue. “The fashion show will tell the world that an individual with autism can achieve great heights and be the best when given the right opportunities,” she added.

Cham’s mother, Cathy, was ecstatic that her son qualified for the project, which screened participants on their basic painting skills on canvass.

“While all artists have opportunities to work and have art exhibit, learning hand painting on piña gives them a totally different range of opportunities,” she said.

“The (possibility) of extra income and employment would really help our children,” she said, adding that the project will also train the spotlight on the children’s talent instead of on their disability.

“If people see their creations, they won’t see the disability anymore. What they’d see are the skills, the gift that our children (have been blessed with),” she said.

Indeed, noted Legaspi, while rendering artworks on piña, a delicate fabric, is no easy feat, the skill seems to come naturally to her special students.

“To make a beautiful painting on piña, you have to be very careful, you have to control the water and the paint … you have to attune yourself to the characteristic of the fabric,” she said.

But the five were easier to train than her other students, Legaspi said. “They work faster since they are more focused and their interest lies in art. They can also follow instructions well,” she noted.

The artists are as enthusiastic about the project. “It’s fun painting for FAAB,” said Cham, who wants to go to one of the fashion shows next year so he can tell the people that he is “proudly autistic.”

While the parents of the other artists are doing their personal fundraising to be able to attend the show in New York next year, Unilab Foundation is also helping out, said Grant Javier, the foundation’s project officer.

Parents of artistic children who are interested to learn the skill of painting on piña are as welcome to join the group, and may send their queries to [email protected]

How Adel Tamano came to terms with his son’s autism