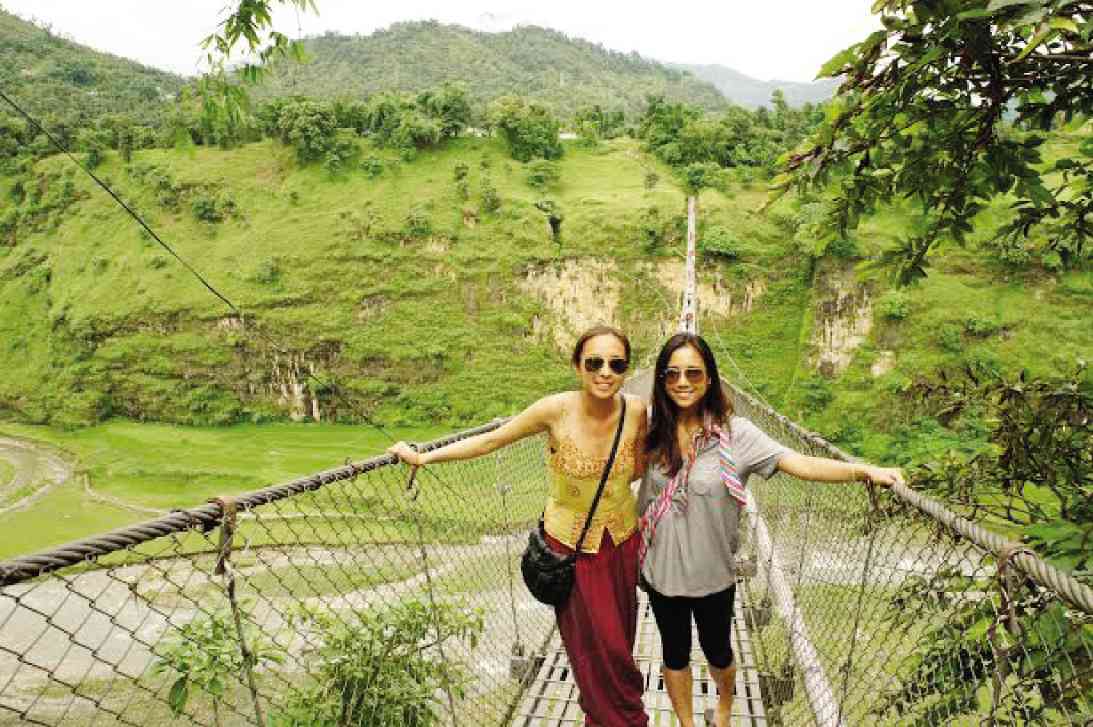 CROSSING a deep gorge in pokhara

Still waiting to hear from Nepal

Nepal is the only country in the world with more gods than people, more temples than houses and more religious holidays than days in a year, making it a country where “every day is a celebration,” explained Ram, our tour guide.

In light of the destruction wrought by the recent earthquakes, I struggle to accept that what I had discovered and treasured about that country may no longer be there.

In the summer of 2012, I applied as volunteer in an international organization to work with underprivileged children. I was surprised when I was offered the placement in Nepal.

At first my parents were apprehensive, and so was I, since I didn’t know anything about Nepal.

Nevertheless, after an irritatingly long list of vaccinations and with zero expectations, I, with two friends from the Philippines, left for Nepal.

Landing in the capital, Kathmandu, was an experience. Tribhuvan International Airport was rated the third-worst airport in the world by CNN in 2014.

Our hostel, Red Planet Guest House, was no better. Entering our room, a lot of the fears I had became a reality. Within seconds, my best friend Jelly  poured her entire bottle of isopropyl alcohol on the floor in complete panic!

From then on, we knew this trip would be an adventure.

We spent our first weekend touring areas in and around Kathmandu. The first site was Shiva’s main temple, Pashupatinath, one of the most sacred Hindu temples in Nepal, was an expansive complex bursting with life.

On the banks of the Bagmati River, which flowed through the temple grounds, were multitudes gathered around several cremation ghats, where  corpses were being burned over wooden platforms. I  was captivated by the beauty and sacredness of the ritual.

On the steps of the temples, longhaired sadhus (holy men), in saffron-colored garments, skin powdered with dust and ashes, were either deep in meditation or practicing hatha yoga. With the stunning gilded triple-roofed temple in the background, other worshippers  bathed in the river, chanting, praying, tenderly touching religious statues and participating in other activities.

Swayambhunath Buddhist Temple, with more than 2,500 years of history, is one of the crowning glories of Kathmandu architecture, making it a Unesco World Heritage Site.

Mobbed by monkeys, the compound has beautiful temples, shrines, statues, carvings and images, all with their own poetic representations of Buddhist and Hindu iconography.

For centuries this site has been an important place of pilgrimage for travelers on the ancient trade route between Nepal and Tibet. We walked around the stupa clockwise, as custom dictated, to check out the stores selling traditional Nepalese and Tibetan handicrafts.

Although this site abounded with beautiful souvenirs, it was not at all touristic; its visitors still consisted of Buddhist monks on a pilgrimage and a small handful of European backpackers.

At the Café De’ Stupa Roof Top Restaurant, we tried a local dish, momos—delicious dumplings with spicy curried buffalo or vegetable fillings, a cross-cultural influence of neighboring China and India. From there we observed devotees circumnavigate the stupa, spinning the prayer wheels at its base as others prayed fervently to the ancient carvings.

The orphanage was on the hills around Kathmandu Valley, in an area called Bodily. Surrounded by rice terraces, maize fields, herds of animals and thick forests, our accommodations were not only clean, but offered stunning views!

Despite its simplicity—we had to bathe with a dipper and bucket, and electric power was available only three hours a day—we were extremely content.

We would start our day with a heavy glass of Nepalese milk tea, after which we would make our way to Budhanilkantha Model Community Academy (BMCA), a 30-minute walk through rice fields. There we taught English to  kindergarten students.

Waking up at 7 a.m. was easy because I looked forward to spending the day with the adorable children. One of them, Sorita, would help me instruct, translate and discipline the other kids.

She was intelligent, confident and tough. When one of the younger kids needed to go to the bathroom, she would accompany them, put on their shoes, help the little ones use the toilet, and teach them how to wash their hands after.

I found out later that she came from a nearby institution called ECDC that looked after little girls whose parents were in prison.

She explained to me how her father had married another woman; and so her mother, depressed and distraught, married an Indian man and moved to India, where she started a new family.

Left with their father and his new wife, Sorita and her sister, Kazul, found themselves in a problematic household. One day, their father was taken to prison, leaving both girls to survive on their own until the institution took them in.

We would end the day cooking our dinner with the girls from the orphanage. We would make a big bowl of dal bhat (Nepalese lentils), rice, sautéed pumpkin leaves, vegetable curry and atchar (spicy pickled tomato sauce). The food was delicious!

After dinner they would teach us how to dance Nepali and Bollywood dances. They would dress us up in saris and kurtas (local attire), teach us basic Nepalese phrases, show us how to cook native dishes; once they even painted mehndis (temporary body art) on me.

Our weekends were always filled with activities and trips. On our second weekend, we trekked through the National Park of Kathmandu Valley, abundant in waterfalls, rivers and ancient temples.

We visited a Hindu religious site where we saw  people lining up silently in prayer, carrying small copper plates with grains of rice, red powder and tiny yellow flower petals, which they scattered on the statue as ritual offerings (puja) for the god of protection.

On our third weekend, we took a 30-minute flight to the breathtaking city of Pokhara, nestled beneath the snow-capped peaks of the Annapurna range.

We began our day with a trek to the World Peace Stupa, known locally as Shanti Stupa. Situated on top of the Ananda Hill, this was where visitors came to marvel at the panoramic view of the Himalayan range, the grand Fewa Lake and Pokhara City below.

After our geological and cultural expeditions, we visited a Tibetan refugee camp, where the occupants sold traditional handmade carpets to support their schools, monasteries and hospitals.

Because of the people’s tolerance of various forms of worship, 15,000 Tibetan Buddhists found refuge here, as well as  50,000 Bhutanese Hindus who escaped religious discrimination in their country.

With the mystical snow-crested Himalayan Mountains surrounding us, the stunning beauty of Pokhara was truly an unforgettable sight.

On our last weekend in Nepal we visited the famous ancient city of Bhaktapur, a Unesco World Heritage Site and also one of the best preserved medieval towns in the country. It was founded in the 9th century and served as important stop on the trade route to Tibet.

Unsurprisingly, the area had exquisitely carved ancient temples and statues, giving it a surreal skyline of multi-tiered Nepalese roofs set against the Himalayan Mountains.

It has remained a living ancient town. The locals sourced their food only from farmers around Bhaktapur, and the town’s craftsmen, whose skills have been passed down through many generations, continued to restore the temples and old houses.

I was so distressed to learn about the destruction the earthquakes had wrought. I thought about everyone I had met, every temple I had marveled at, and the landscape that left me in complete awe.

I contacted  the organization, hoping it could give me information about the BMCA School and the orphanage.

A few months have passed and I am still waiting to hear from them.

News about Nepal has started to fade in the media and people will forget about what happened there. Almost all of the beautiful places I saw, which have stood for  thousands of years, have been destroyed in a matter of minutes.

It is a country that depends on tourism and is facing a long and difficult recovery.

The earthquake destroyed not only treasured ancient sites but also modern infrastructure, leaving the economy crippled.

When I was in Nepal, its first shopping mall was just being built, along with the renovation of government buildings and widening of roads. There was a bright outlook for the country in 2012.

Now the people will struggle to pick up the pieces and start life anew.

The Philippines previously experienced a catastrophe with Supertyphoon “Yolanda”; wealthier countries came to our rescue. I know that many in the country don’t believe in giving foreign aid, seeing as we suffer from so many problems at home.

However, Filipinos also understand the challenges a country faces when hit with this kind of disaster. We witnessed how small donations of ordinary people thousands of miles away made a world of difference.

In Nepal’s situation, the roles are reversed—the Philippines is the wealthier nation. Therefore it is now our turn to demonstrate the same global concern that was shown to us after “Yolanda.”

Nepal lacks the means to rebuild from the damage. However, with help from ordinary people like us, Nepal has a fighting chance.