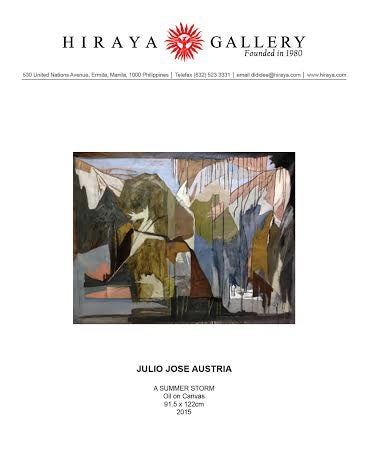 IN ABSENTIA is the artist on the opening of his solo exhibition at Hiraya Gallery, which puts the pressure on his paintings on the wall to regale the visitors, if they could speak, but they do, in fact, only in the way that paintings of substance and mystery can communicate without the need for language or speech. They shine as they must, and should their creator not be in their midst, they will perforce engage the viewer in a visual conversation so satisfying that the artist would not be missed.

In “Vantage Point,” traveling artist Jojo Austria does, as it were, a disappearing act, for he is, indeed, as of this writing, in New York, on the other side of the globe. While at this, it is worth recalling that in a show a couple of years ago, the artist very likely had portrayed himself in a painting which he titled “Into the Unknown.”

In that work, a traveler is turned away from the audience, his backpack saddled onto his shoulders, and in pictorial terms, is about ready to walk into the distant horizon till cinematically he is nothing but a speck of unrecognizable pigment. Still, one recalls his cityscape of London, signified by the iconic public telephone booth, always painted a fire-engine red, and the panorama of the Westminster Hall and the Big Ben Tower.

“Into the Unknown” re-emerges in another work that is portentously declarative of the artist’s chosen theme: a search for direction (not necessarily autobiographical), a sojourn of soul-seeking significance, hoping to arrive at the convergence of destiny and destination in a geographical setting where he would find for himself the best, as the title implies, perspective in life. Indeed, the works in the show will, by themselves, constitute a veritable travelogue, a journey not always tied down to some physical place but rather to an emotional and psychic site, as of a soul without anchor, free to wander, intentionally unattached to any comfortable mooring.

Austria’s works straddle the nether zone between figuration and abstraction, where the figure is caught on the edge of dissolution, and where abstract forms and shapes huddle together in intimations of imagined human figures.

Indeed, two works assert the presence of a human character, bearing the titles “Sitting Shadow” and “The Wandering Soul.” Each tantalizingly refers to the other; one is a resolution of the other.

The title painting “Vantage Point” is suggestive of terrain, mountain ranges, ridges of land, though they may merely be irregular geometric patterns and patches, in loose or tight arrangements, which, more and more, characterize the look of a Jojo Austria painting. His patchworks have a tough but lyrical sentiment.

The characteristic trademark dripping wet pigments so beloved by Abstract Expressionists flatten the abstract shapes even more, effacing any suggestion of depth that may have been achieved, bleeding into their interstices and crevasses.

Symbolically, the work “Chosen Paths” will have to be interpreted as the crossroads of the journeying soul. Indeed, it is animated by intersecting directional arrows, and heaven knows whether the confused soul will be directed toward paradise or perdition. In any event, the wandering soul arrives at the portals of enlightenment (what in Zen is famously called satori), caught between a varied season: the winter of discontent in “Side Effect,” a snowbound zone, and “A Summer Storm.”

These two works, for instance, indicate the ability of the artist to articulate a thought, a concept, or mood, that expresses itself in a calibrated degree, by cooly keeping his distance, thus: a winding white-sheeted road and a graphic road sign will heighten our awareness of something familiar; or a certain combination of colors conditioning our feelings to a season will suffice.

Austria’s works can choose to be cryptic and mysterious without alienating the viewer. Indeed, it draws him closer into the painting, as though the answer to the last piece of puzzle remains in his hand. Or head.

That one arrives at his conclusion, by reasoning or by instinct—either is an excellent vantage point, by the way—can be gleaned from the last two works, “Mist of Hope” and “Intuition.” In both works, one senses a feeling of enlightenment, as of a clouded mist parting or thinning out or a curtain lifting up verily like a mass of drapery. Thus the viewer is never at a loss, for the artist, as the controlling and guiding intelligence behind his works, is always present.

No matter that he may be absent on his opening night.