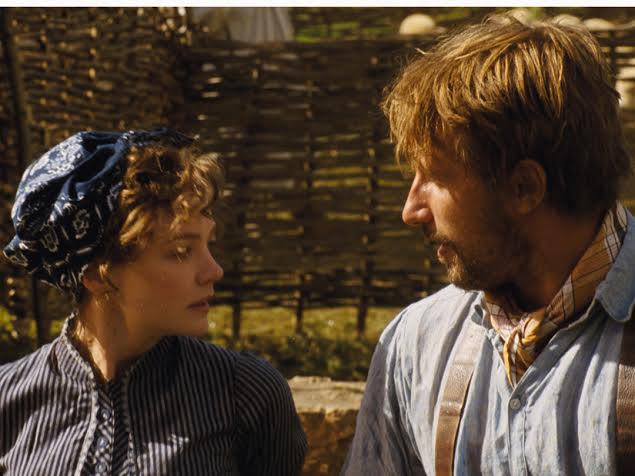 The film tells the story of the simple farmer Bathsheba Everdene (Carey Mulligan), who inherits her uncle’s farm and becomes a fierce, impulsive heiress faced with a myriad life choices.

As she weaves through a tangle of passion, obsession and betrayal, she must etch her own path to what she really desires.

The pastoral beauty and sly humor that characterize Bathsheba have kept Hardy’s novel one of the most popular of all time. The story has inspired numerous stage and film adaptations through the years since its publication in 1874.

“‘Far from the Madding Crowd’ has elements of tragedy, but it also has a tremendous lightness, brightness and romance interspersed with moments of pathos and drama,” Nicholls says. “They combine to give you a real sense of the energy of life.”

Echoing Nicholls, Vinterberg says the film is a “story of fantastic characters created on the page with great depth, movingly integrated into the landscape surrounding them.”

Vinterberg added: “My approach was to combine that epic grandness with believability—to bring out all the vulnerability and fragility in these characters, while showing all the lavish terrain and drama.”

Mulligan is intrigued by the character she is playing. For her, it is “in the cracks in Bathsheba’s armor that the light shone through.”

“She’s definitely someone who makes serious mistakes, but she’s never duplicitous,” Mulligan said. “I saw her as a woman who lives by her instincts, her guts, which can be dangerous—and I became very interested in those flaws and in her straightforwardness.

“In the book, every kind of feeling that goes through Bathsheba is manifested in the rosiness in her cheeks. There are so many lovely descriptions of how she just can’t hide anything. That is what is so lovely about the character, and what I wanted to explore in her.”

Mulligan is also entranced by Bathsheba’s slow-boiling love for Gabriel, which starts out as a surprising mix of friendship and reticence, only to come upon her in ways she did not expect.

“I think there’s something about Gabriel that sort of cuts through everything in Bathsheba, Milligan says. “He is the only person in her life who can hold a mirror up to her and be completely honest. I love that, ultimately, they realize that this companionship and beautiful, natural intimacy they have with each other is something they can build on.”

“Far from the Madding Crowd” opens July 8 in cinemas nationwide.