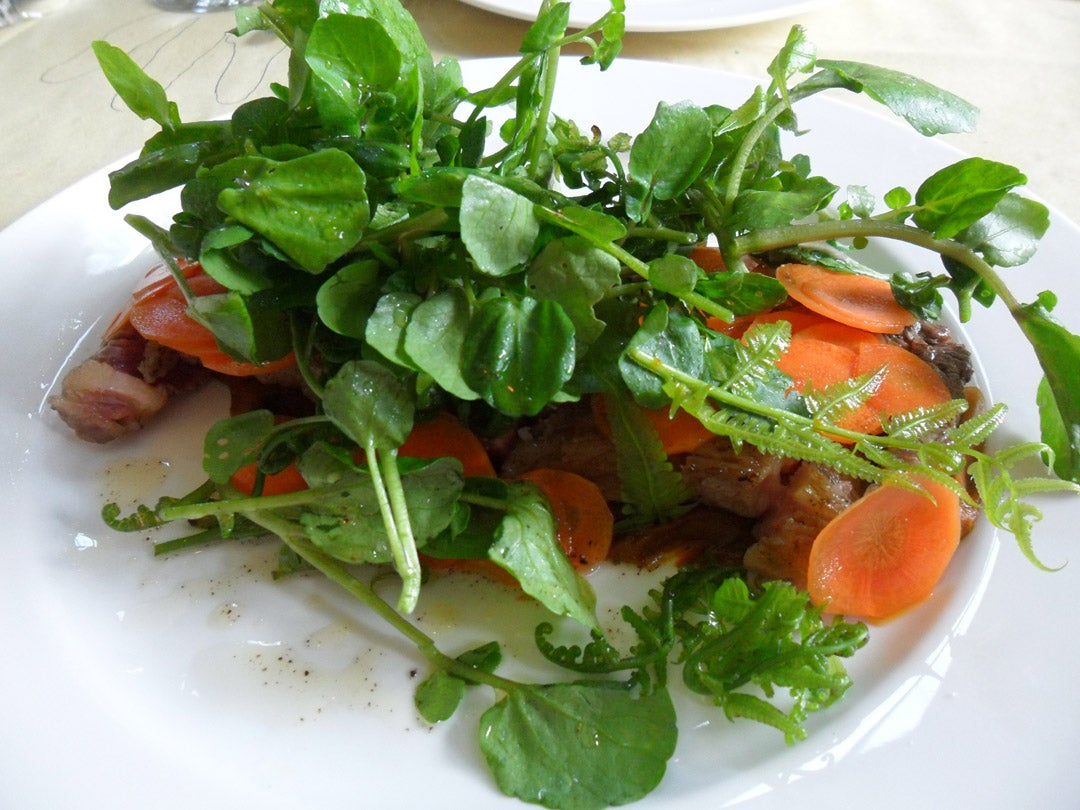 Dining with colleagues who review restaurants almost daily, sometimes traveling abroad just to do so, can be bewildering even for someone like me who’s used to it. For instance, we’ve met visiting chef Jeff Claudio from Singapore, where he cooks at Burnt Ends, voted one of the best restaurants in Asia. Moreover, food writers have become familiar with ingredients, once considered exotic but now used as a matter of course in high-end restaurants.

One such ingredient is virgin butter, which Claudio used in the soft, pillow-like potato bread he made. The butter is considered artisanal as opposed to commercial, made in-house at times or bought from specialists. The best ones are supposed to retain the taste of the terroir (environment) where the cow whose milk was used comes from, much like what wines are supposed to convey. It’s all very esoteric. It can be both a pain and an adventure keeping up with what’s new.

The chef went to Farmer’s Market in Cubao to buy ingredients for lunch. He said the place “kills” Singapore with what were available. The clams and the toro (choice cut belly from bluefin tuna) were among his finds.
The clams had a sauce of kosho, and that was a jolt on the palate. Kosho is a Japanese flavor from pepper and chili; he mixed it with calamansi.
Slices of toro were topped with caviar. The dish wasn’t on the menu, but he just had to get the fresh produce and present it.
We still had one more appetizer, disks of pork croquette with a French sauce called gribiche (egg yolk and mustard emulsified).
In between our lunch, Jessie Sincioco introduced him as her first cousin (their mothers were sisters). Jeff Claudio grew up with his family in Canada. Then his parents told him, more like forced him, he said, to train at his cousin Jessie’s kitchen when it seemed like he wanted to be a golf pro. He later studied Culinary Arts in Canada.
Returning to Sincioco’s kitchen as chef now, he was amazed at how the cooks he trained with are still there. Of Jessie, he playfully dubbed her cousin “the queen of cuisine!”
An endive salad came next with pomelo, walnuts, long strips of banana heart and shredded pecorino (Italian ewe’s milk cheese). The dressing was brown butter (the process is much like how we get those brown bits of latik when extracting oil from coconut milk). All the elements made for a tasty salad, with different flavors and textures fusing.
‘Kinilaw’
The next dish had what Claudio said was his favorite— kinilaw. But it was more like the Peruvian tirandito because the sauce was leche tigre made from lime juice, onion, chili, salt and pepper. The fish was hidden from view by fried rice noodles which added a crunchy texture.
The prawns (sugpo) were firm and fresh, bathed in a buttery sauce, presumably French, with Chinese XO sauce, the mix of ingredients from different cuisines so effective.
We looked at each other because we were thinking of the same thing—rice. Someone had the good idea of getting the remaining potato bread and soaking up the sauce.
Also hidden from view was the main course of beef because of the watercress, fern and thin carrot slices. The beef was listed as Cape Grim, top-quality from Tasmania, Australia. And specks of another favored ingredient in high-end restaurants these days, black garlic, added that sweetish flavor. Black garlic is used in Asian cooking, particularly in Korea; it is touted to be a health food.
Dessert was light: cooked rice with coconut milk and toasted almond slivers cooled with shaved ice. Sincioco, who is one of the best pastry chefs in town, confessed that her cousin was weak in the dessert department. But I thought his other two enders were more interesting than the usual—tres leches and a mix of reduced milk, banana, peanut and polvoron.

Chef Claudio has worked in different well-known restaurants in many parts of the world, soaking in as much as he could learn from the best chefs. There was Yourstruly in Toronto, Viajante in London under Nuno Mendes and Per Se of Thomas Keller in New York.
Asked to name chefs he wanted to work with, he said that if he could turn back the time to the period 1991-2001, it would be Ferran Adrià at elBulli in Spain. But at present, the chef he admires most is French chef Pascal Barbot of L’Astrance in Paris. Because Barbot goes to market daily, “every day the menu changes kinda spontaneously,” Claudio said. He knows that a lot of chefs who worked at Barbot’s restaurants have become successful. Barbot learned about different ingredients and dishes because he has traveled the world working—in Australia, the South Pacific and North Africa—as head chef to the admiral of the French fleet to fulfill his compulsory military service.
Chefs like Claudio seem to transfer from restaurant to restaurant quite often. He said that many people think that the work cycle is six months but quite standard is that chefs stay for one year. He also said that he would transfer soon, but he didn’t want to say in what country and which restaurant.
When Jessie called for her staff in the kitchen, they came out to pose with her, including chef Jeff. When he’s in the country, he hangs out with his cousins, mainly in Bulacan, home province of Sincioco. My visit years ago to her place showed a bucolic scene of rice fields behind her house. When asked what he does there, Claudio said he and his cousin kill chickens and cook them.
So which eating place does he like here? Jollibee, he said. He loves Chicken Joy with the gravy, the quality good and consistent. It’s what chefs aim, I suppose.