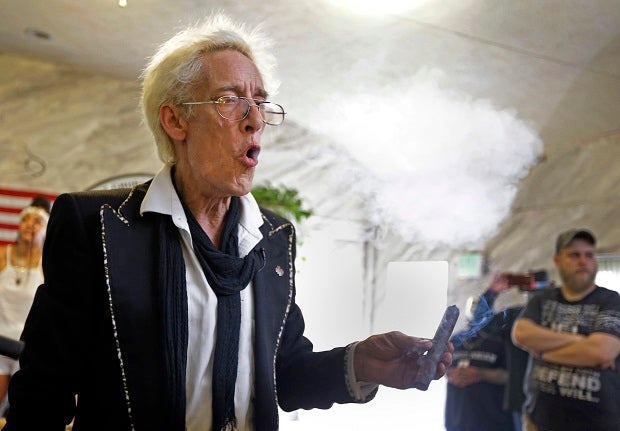 First Church of Cannabis Founder Bill Levin exhales as he smokes a "sacrament substitute" during the church's first service, Wednesday, July 1, 2015, in Indianapolis. Levin said he decided to keep marijuana out of Wednesday's service to ensure he can test the Indiana religious objections law in civil court instead of on criminal grounds. (AP Photo/Michael Conroy)

INDIANAPOLIS, United States — A pot-smoking church is suing the city of Indianapolis and state of Indiana, claiming laws against possession and use of marijuana infringe on its religious beliefs.

The First Church of Cannabis was formed as a test of Indiana’s new religious objections law. The church filed its lawsuit Wednesday in Marion Circuit Court. The defendants include Gov. Mike Pence.

The lawsuit claims church members believe marijuana “brings us closer to ourselves and others. It is our fountain of health, our love, curing us from illness and depression.”

There was no marijuana during the church’s first service July 1, which was observed by more than 20 police officers. Local officials had threatened arrests if marijuana was present.

A message seeking comment was left for the Indiana Attorney General’s Office.

Indiana’s law sparked protests and boycott threats this spring amid concerns it could provide a legal defense to discriminate against gays, lesbians and others. Lawmakers later revised the law to address those concerns.