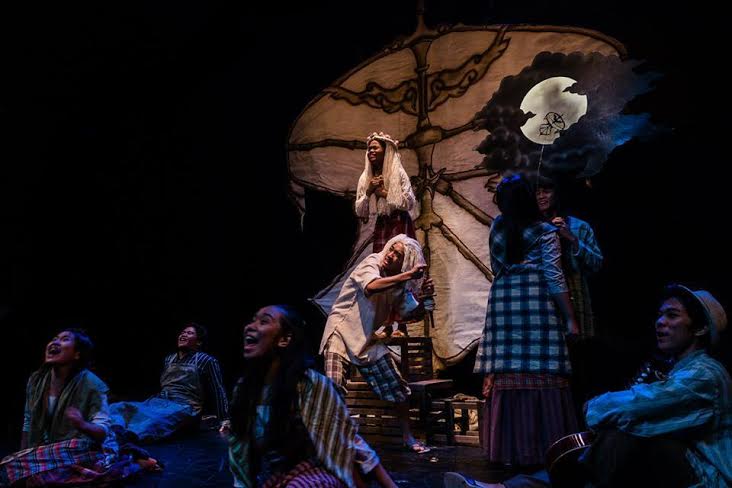 “Sariwa” (fresh) is the theme of Virgin Labfest XI, and what has emerged at the tailend of this annual festival of “untried, unstaged, unpublished” plays, which concludes its three-week run tomorrow at the Cultural Center of the Philippines’ Tanghalang Huseng Batute, is a kind of accidental dichotomy, the 12 entries of this year’s roster having somehow found a way to tackle the central motif in two distinct ways.

There is the obvious: “sariwa” denoting freshness, a departure from the old and stale, which is the principal appeal of the Labfest’s three best entries—Maynard Manansala’s “Dalawang Gabi,” Jerome Ignacio’s “Kublihan,” and Eljay Castro Deldoc’s “Si Maria Isabella at ang Guryon ng mga Tala”—and not only because each features at least one bright new talent at the helm.

Manansala’s “Dalawang Gabi,” directed by Jade Castro, should be essential study material for people who aspire to write comedy. By virtue of crisp, naturalistic dialogue, it transforms a platitudinous subject—the teacher-student relationship, and not the pedagogical kind—into something riotous and refreshing, dated Alma Moreno jokes and all.

Just as Debbie (Meann Espinosa) is about to profess her love to her former student Lester (Ibarra Guballa) in hilarious fashion that involves a gaudily decorated bulletin board, he tells her he’s engaged.

Two years later, the tables are turned. Here, Espinosa and her usual first-rate comic chops (“Hindi ako bumabata, bumibigat lang,” she deadpans), and Guballa, in a breakthrough performance that demonstrates through the slightest gestures and silence the brutality of heartbreak,  achieve a fine brew of hilarity and poignancy.

A different sort of sadness, one that echoes the us-against-the-world complex hounding the kids of Frank Wedekind’s “Spring Awakening” and Han Ong’s “Middle Finger,” courses through “Kublihan,” directed by Guelan Luarca. As written by Ignacio, this Labfest’s breakthrough playwright, it is almost Chekhovian in the way the unspoken does most of the elegant storytelling.

Two friends meet at their secret spot—a bench overlooking Marikina Valley in a school not named Ateneo—for possibly the last time, and what starts out as seemingly harmless bantering eventually surprises the audience with stifled feelings and electric revelations.

In this elegiac examination of a friendship in transition, Abner Delina Jr. as the flighty, kinetic senior, and Joshua Tayco as the introverted freshman, provide two of the festival’s most nuanced performances—quietly powerful and nearly devastating.

Stagecraft and imagination take center stage in “Si Maria Isabella at ang Guryon ng mga Tala,” Deldoc’s adaptation of Dean Francis Alfar’s “The Kite of Stars.” It’s about a young girl who goes on a lifetime’s quest to build a kite that can send her to the stars.

And what fantasy! As directed by the visionary Ed Lacson Jr., this play is hands down the Labfest’s most audaciously mounted production, a dazzling union of puppetry and shadow play, lights and shapes and images and sounds, bringing sparkling life to what would seem like an impossible transposition. And the comfort with the archaic Filipino of the script evinced by the vibrant young ensemble, led by the incandescent Krystle Valentino as Maria Isabella, is laudable.

There is also a worthy contender for next year’s Labfest’s Revisited set in Herlyn Alegre’s “Huling Huli,” about women who engage in the desperate sex-for-fish trade.

On a desolate stage, punctuated by the constant presence of a fishing boat and frayed fishing nets, director Lawrence Fajardo once again demonstrates a flair for the operatic (evidenced in his award-winning film “Imbisibol,” itself adapted from the eponymous Labfest play of two years ago).

Peewee O’Hara, Mailes Kanapi and the luminous Martha Comia as a virginal young woman on the cusp of a ruthless sexual awakening play three generations of women and virtually sear the stage with their intense performances.

In the end, when the nets finally straddle even the fourth wall and doom these characters to entrapment in their way of life, you can only feel real pity for them.

In José T. Garcia’s “Birtwal,” sariwa is in the staging. As the dialogue occurs through text message, the lines are slyly flashed on overhead screens, while the actors (J-mee Katanyag and Ron Capinding, as online lovers meeting for the first time in the mall) engage in a carefully orchestrated wordless dance.

What could have been a dreary and dragging experiment happily finds a hook and captures our attention, thanks to director-choreographer Audie Gemora, who brings an actor’s eye to the proceedings to produce an entrancing, altogether original experience. We know it could only end one of two ways, yet we still hang on to every second in anticipation of the inevitable.

And then, there were the plays that somehow took pleasure in their sweetly ironic treatment of sariwa by being about characters who are past their prime, longing for attention, unwanted, “un-fresh.”

In Layeta Bucoy’s “Uod, Butete at si Myrna,” directed by George de Jesus III, the divine Angeli Bayani plays Myrna, a prostitute who was once her barangay’s go-to whore, and her lover is the stutterer Uod (a convincing Ross Pesigan). “Konting atensyon, konting malasakit, konting drama” is what she desires, and the audience is served exactly that, in provocative, disgusting ways that make the theater reek of squalor: the couple unabashedly having sex; a grippingly detailed narration of a grisly child rape; and, in a wickedly humorous sequence, Bayani, her character now dead, getting trussed up in layers of cloth and plastic.

Unfortunately, a jarring shift in tone that occurs midway through the play reveals the narrative’s shortcomings. Chief among our grievances: Characters don’t exist in a vacuum as idealized caricatures unaffected by setting and context. In this play, the established scenery of a cramped railway hovel where secrets are impossible to keep, especially among people who have known each other for a lifetime, simply works against the story’s supposedly shocking twist.

Nicolas Pichay’s “Macho Dancer: A Musical” is about five macho dancers in a washed-out club rehearsing for a final show to end all final shows. At some point during this inebriated musical, the guys start singing “Everything is beautiful at the Po-Mo” (referring to a fictional postmodern dance school), and immediately, Broadway enthusiasts are bound to think, “‘A Chorus Line’ Meets ‘Follies.’”

While gifted with a taut ensemble led by Riki Benedicto and Paolo O’Hara, this entry, directed by Ralph Peña, is also overstuffed and strangely scatterbrained: too many storytelling devices; an almost pathological obsession with Hindu culture; and not enough time for character and scene development.

Perhaps the glow-in-the-dark elephant that appears at the end of this musical can help solve its rumbling identity crisis.

The estranged mother-daughter meet-up cliché is revisited in “Ang Nanay Kong Ex-NPA,” an attempt to take us back to the degenerate Marcos regime.

Yet, as written by Mario Mendez and Genevieve Asenjo (who also wrote the novel from which this story is culled) and directed by Rody Vera, it probably would have worked better as a radio drama, or even a tell-all talk show hosted by Kris Aquino.

This exhausting production could have been a more transporting memory play with more capable actresses—one who could vividly shade the mother’s meandering recollection of a fateful night during Martial Law, and another who could imbue the daughter with equal measures of tenderness and ferocity.

Alvin Molina’s “An Expected,” directed by Roobak Valle, has “missed opportunity” written all over it in neon-pink calligraphy. What could have been an insightful two-hander about a young gay couple clashing over love and principles is reduced to shtick and whimsy with the addition of an imaginary fairy character. Serious conversation gets rudely interrupted by unnecessary comments, and too often, it’s like the writer is stopping himself from going “that deep.”

It is delightful to watch Gio Gahol perceptively tear through the part of the modern gay man; frustrating that Acey Aguilar, as Gahol’s character’s confused lover, gets all the didactic and moralizing lines; and annoying that the play expects everybody to accept unquestioningly the existence of the darned fairy.

Job Pagsibigan’s sci-fi rom-com “When Sam Met Jo,” directed by Ian Segarra, is another missed opportunity, and we don’t even have to bring up the overabundance of nosebleed-inducing scientific jargon.

It has its laudable aspects— the time-travel bits (the same scene farcically repeated four times). But it would have been better if Randy Villarama, injecting charm and savvy into the character of Sam, had a more adept scene partner (Chic San Agustin in this case) who wasn’t as stiff and stilted. Someone who can deliver the line, “Ginawa mo akong renewable energy!”, for instance, without making our eyes roll.

“Hintayan ng Langit,” Juan Miguel Severo’s crowd-pleaser about aging ex-lovers who meet in the afterlife, directed by Raffy Tejada, proposes some novel ideas. There’s purgatory as a transit sauna, for instance, and its flimsy walls as gossamer barriers between the living and the dead. Much of its floundering bulk, however, also unwittingly asks: Does kilig alone make a play?

Because, truly, many pointless lines and weightless scenes seem to be here more to toy with viewers’ notions of romance than to meaningfully move the story along.

Watching ballet legends Edna Vida and Nonoy Froilan throw quips and witticisms at each other and dance a slow, tender number near the end may prove appealing to most. But a production that does not devote enough attention to character and scene work can only be, in the end, insincere and lightweight.

Finally, there’s Joe Mari Sanchez’s “Talo ang Walang Alam”—distressing proof that a selection committee can be given a pool of 156 newly written plays and still pick something wrong.

This production, directed by Issa Lopez, does not break new ground in either subject matter or writing (which is painfully obvious). The staged reading we saw of Ross Manicad’s “The Wedding Planners,” starring the wonderful Topper Fabregas and Marco Viaña as exes, and helmed by first-time director Jonathan Tadioan, was a way more stirring and emotionally authentic experience.

Virgin Labfest 11 has remaining shows today and tomorrow. Call 8321125 loc. 1606 or 1607, or visit www.culturalcenter.gov.ph.
Visit the author at www.vincengregorii.blogspot.com, follow on Twitter twitter.com/vincengyu.